Cold Sun formed in Austin, Texas and had been active for only a few years. Bill Miller (autoharps, voices), who was a freak of 13th Floor Elevators and later known as one of backing members of Roky Erickson, formed a psychedelic rock band Couldron with his mate Tom McGarrigle (guitar) in 1968. Soon they changed the name into Amethyst and appeared on stage of LL Club, a psychedelic club in Austin, as a follower of Elevators…

Thank you very much for taking your time.

Thank you, Klemen. I hope this is helpful to you.

I’m doing a number of interviews lately. You are very cool, so you are further ahead in line than the rest. I’m surprised about some of the stuff you ‘get’. I’ve seen your magazine.

I suppose that was what I intended in the first place. I guess I should feel … happy about that. I guess that I do. I supposed I was focused on that back then, a world view. It’s no wonder that we did not go over very well with the locals. Young people are concerned with mortality, as well they should be. I’m especially glad that a number of them are young scientists. That was my intention – to reach the future. I think more and more recent generations feel a vibration, something unseen, something that conflicts with acceptance of mortality. It’s no wonder that vampire media is such a big thing these days.

(By the time this interview reaches people in the not so near future I would hope to have met them in person. People want to be saved.)

… from those who can not pass the test and from their beliefs.

A lie detector test (laughs) … no, not really … from … Klemen, do you think an electric Ouiji Board is possible?

I get the idea that anything could be possible. Do you agree?

Yes, and … Thomas Truax, a great current British singer has a song about Joe Meek in which he has quite a few haunting lines. One I like is, “Maybe we could change the future …”.

I remember listening to the radio as a child. I remember the dawn of the transistor age.

One song I heard a lot on my first transistor radio was “Angela Jones”. Another one was “Green Door”. Both of these were produced by Joe Meek, who ushered in the first age of transistor sound with music made for it. He knelt at the altar of the heart and the soul of the transistor.

In fact I would like if you could tell me a few words about your childhood and teen years?

I can mention that I went to night school in my high school years. I was nocturnal, but I really despised public schools. I do recall that. I really had no ambition to interact with people my own age. I never dated high school girls. I liked college girls much better, junior cougars though they were. America was a snake pit back then. Wait, I’m sorry. I didn’t really mean that. I like snake pits. I still am surrounded by people mostly not my age. Now they are younger – I guess the college age thing stuck with me.

Around 1968 you and your friend Tom McGarrigle formed your very first band. You were called ‘Cauldron’.

That was a stand-by name until we had a name I was satisfied with.

The Aliens was the first name I was really satisfied with and that was a few years later. We would have changed Cold Sun if we had come up with a better name. I thought ‘Dark Shadows’ was a perfect name but it was a little too close in time to a TV show of the same name. Every band I’ve been a member of since The Aliens has had a name I like. I like those early names now. In fact, the Live in ’72 album is called ‘Amethyst’ and not only because it has bonus tracks of Amethyst Live at The I.L. Club. We actually like that name as a title for the first live album. That was Wolf’s idea. I like it a lot.

What kind of material did Cauldron perform?

The songs were the same as the songs of Amethyst. I think we only called it Cauldron for a few weeks until we came up with a better name. See, we suddenly had a gig and needed a name.

Can you talk about that gig?

Oh, alright. We were the house band of the general strike and we played on campus before a crowd of several thousand angry people. The general strike was very much like the current ‘Occupy’ movement. ‘Pigs Off Campus’ ‘No more business as usual’. I suppose the songs were violent in a way that early gangsta rap was. It was radical. Around the time it became Cold Sun we shifted into more songs detached from the concerns of that world, that era, probably more concerned with this world today. I suppose I’m not so surprised that is popular today, the Cold Sun stuff.

By the way, John Kearney thought up ‘Cauldron’. Tom McGarrigle thought up ‘Amethyst’. ‘Cold Sun’ was my idea.

Later you changed your name to Amethyst and started to play at local clubs around Austin, Texas.

How do you remember the time when you were called Amethyst?

Yes, I remember it very well.

By that I mean if you could share a story of that era.

We played a lot at a place called, ‘Bonnie’s’ and The I.L. Club. We played a localized semi-recurring rock Festival. We did one show with a band called, ZZ Top – back when they were a quartet with Lanier on keyboards. Soon after they were a Trio and on their way up. I like trios.

Among many interesting things you differentiate from other bands is also that you played autoharp. How did you got the idea for that?

I was thinking of a keyboard that would get sounds like Joe Meek or Max Crook. The sawed – off piano came to me at age 15 and I got the autoharp at age 16. It was two years later that I chose it to explore new sounds. I had been using a guitar to write songs. I considered myself a singer but could not afford to hire writers. I began writing using the autoharp and one day I stumbled upon a whole universe of sounds. I figured out ways to control the overtones. The attack varied these tones but then I discovered that the attack itself could be varied to make it sound like several instruments playing several different things independently and at once.

Were you influenced by local bands. How about The Velvet Underground and The Doors?

I really was not influenced by any local bands. The Elevators were the only band from that era that is considered relevant today other than the Doors or The Velvet Underground. So, I can see how it could be perceived as similar. I was definitely not into what was happening locally as far as any influence on my musical concepts. But I do fondly remember the bands of that day. Every town in the U.S.A. had its own version of The Kingsmen. Austin was no exception and had no shortage of greaser bands. I guess I liked the greaser bands more than the ‘mod’ bands. I really liked ‘Tim Lively And The Prophets’, a Kingsmen-like band. And I liked The Babycakes, a Mod band, a lot The Tornadoes were a big influence on me – not the Texas Tornadoes, of course; they came later, but I’m referring to the one and only Tornadoes, the band that recorded, “Telstar” possibly the greatest band ever.

What would be the name of the album if it was released by in its day?

It would be called, Cold Sun. I liked ‘Dark Shadows’ better, but it was the title of a popular TV show.

I think I was more or less Goth – ‘Dark Shadows’ would have been perfect. meek-shadows-? I suppose you could say that my girlfriend and I were more or less Goth. In fact we were very Goth – not very involved with any local scene and not wanting to be. I suppose we wanted to “be a part of it, New York, New York”. We were more pale than others in the scene EXCEPT for Edgar Winter … and Johnny. No matter how hard we tried we could never be quite as white as Johnny and Edgar. We both despised jealous or envious people but I suppose we might be guilty of a tiny item of jealousy, jealous of Johnny and Edgar for being more pale than us. (laughs) 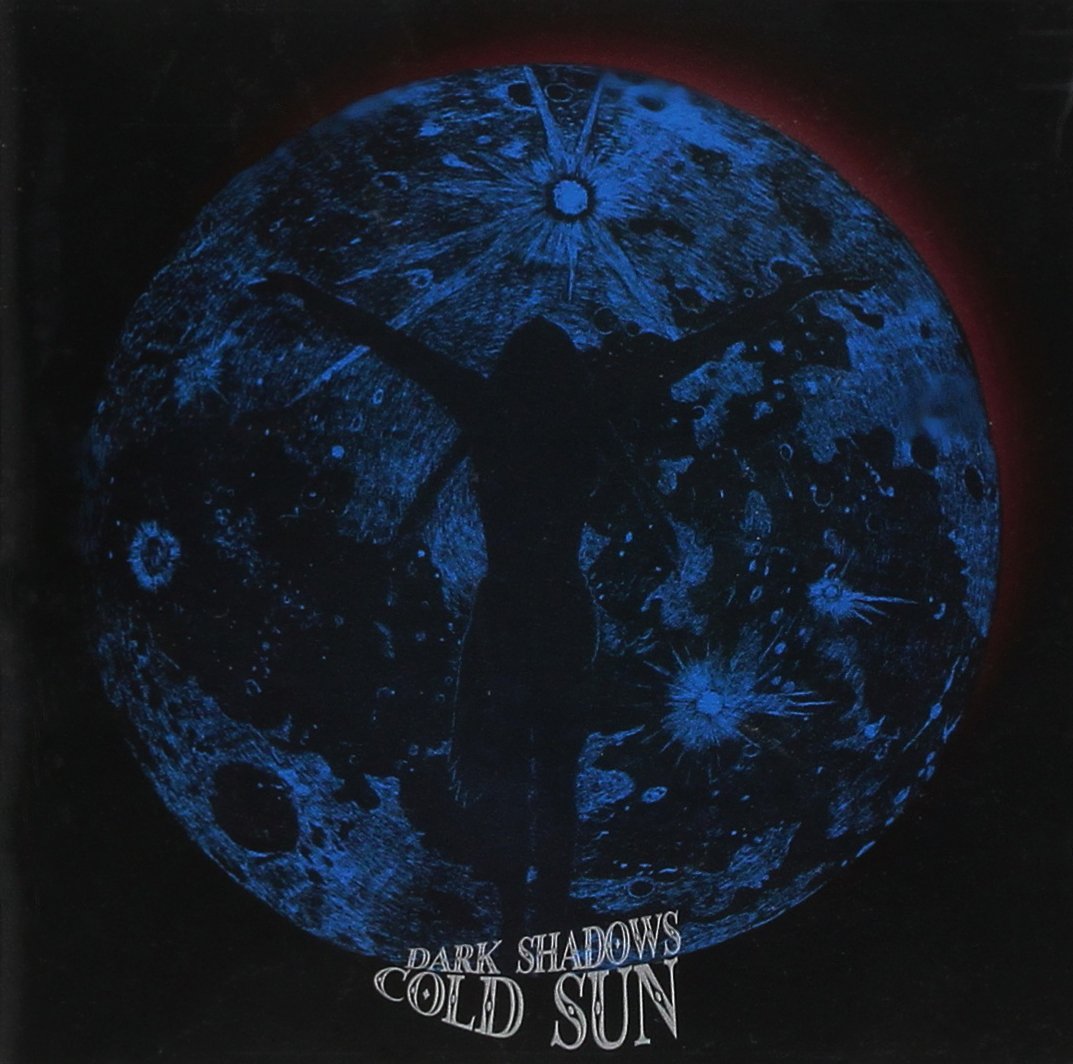 I hear Johnny Depp is in a new film based on ‘Dark Shadows’ the old TV series.

What is this film called?

One thing, that I find very interesting is, that all of your songs on the LP are pretty much dark.

Thanks, Klemen. We try. It’s a dark world. There must have been times I felt like I was opening a fire hose on the hippy crowd.

Thought it would lead to better things and it did – FINALLY, RECENTLY. It sure took a long time.

I knew a few old-style card carrying Commies. I got along with those guys a lot though some of them were not cutting edge with musical. Some of the leftists were anti-dope. But they were not snitches. I was further to the left than Kruschev.

The band was active until around 1973?

That is right. I recall the night I decided to retire Cold Sun was the night I saw Lou Reed in Memphis and read the Rolling Stone review of ‘Nuggetts’ later that night. That is when I decided that Cold Sun never had existed and I wanted to do something revolutionary but far more total Rock-N-roll. “Exactly What ?” was the question. It was not very long after that night that the answer came in the form of my new friend, Roky Erickson. I had known him a while but would never consider working with him. I had NO idea that he was a writer. Also I was a singer. Also I thought he would have rightfully considered the autoharp the LAST thing on Earth he needed. But he saw it the way it was eventually seen in the Aliens productions.

Where did you do most of your gigs?

We played around in Texas, central Texas, San Antonio and Houston mostly.

People reacted to me in a way I did not expect – very positively. It’s been that way ever since.

Only one acetate was originally made and it got lost?

The only acetate made was one the bass player had made up so he could play it on turntables. We had stereo cassettes but most people did not. A few years ago that acetate sold in auction for 10,000 dollars on E-bay. YOU could have an acetate made up of the album – but it would not be worth anything, would it? I can’t imagine WHY anyone thought that worthless acetate was valuable.The bass player knew me. Am I that valuable? I should make up some acetates and sell them at a bargain for 9,000 each instead of 10 if that is the case.