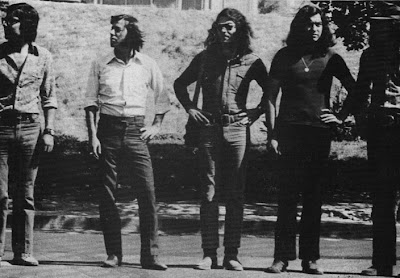 Interview:
1. Thank you very much for taking your time! Let’s start with your childhood and teen years… Where did you grow up and what were some of your influences at the time?
Thank you for having me. I grew up in Vienna, Austria startet music with age 14. Influences then were: Bill Haily, Elvis Presley, Chuck Berry & later on Jimmy Hendrix, Cream, Pink Floyd, Great Funk Railroad, Walker Brothers,etc, etc,
2. Were you in any bands as a teenager, before forming Escombros? Any releases?
Yes, I started with a Rock & Roll band called Jerry & the Cannons playing rhythm guitar and singing, later co-formed a group called first ‘The Only News’, then ‘The News’ and finally ‘Odyssee’, worked in all the possible clubs in and around Vienna and as well toured in Italy mainly Milan
Was as well shortly a back up singer with ‘Gypsy Love’.
3. What was the scene in Chile back then?
In 1969 when I got to Chile rockmusic was really starting up and  Hendrix & Cream influences were noticable with the few bands in existance, the best for my taste were the Escombros .
4. How did you guys came together to form Escombros and why did you use this name?
Escombros existed already for a short while and I met them at a concert and we started talking, I got invited to one of their rehearsals and they decided to have me in their band as lead singer. I brought my own experience as a frontman, my ideas and my voice in to the band which was well accepted by them and the public according to the great feedback we received from the audience in our concerts. Rock music was really at the beginning in Chile and the Escombros were open to all the new influences like for example Jethro Tull and as well my own music and  we all tried to experiment with new ways and created our own style. 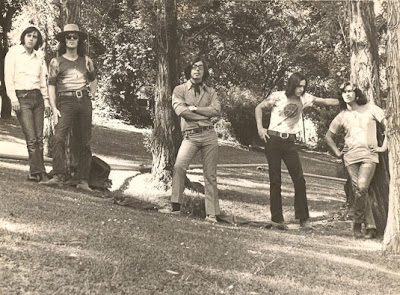 5. In 1970 you released single Green Eyed Lady / Love Machine and an LP. Tell me some of the strongest memories from producing this LP! 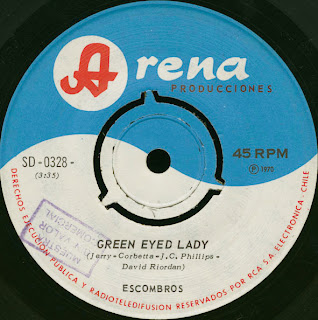 Well it was very exciting to suddenly beeing offered to practically record live in a few days an entire LP and a single in a simple studio on a basic 4track recording machine. It was our own music, (except for 3 covers of other artists) and having had the chance to perform live on TV was as well a special treat. 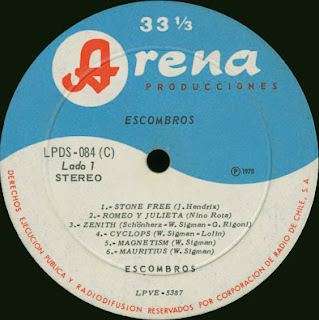 What gear did you guys use?
Marshall of-course rooled the amplifier world, Gibbson Les Paul ,Gibbson Bass and Gretch guitar, next to a simple farfisa electric piano and Ludwig drums was the basic equipment, all bought with great economic sacrifices at that time. 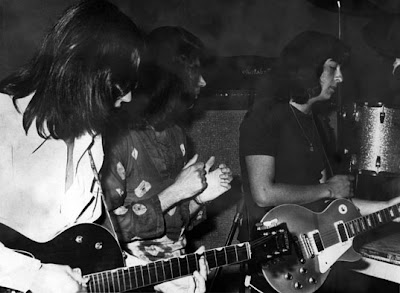 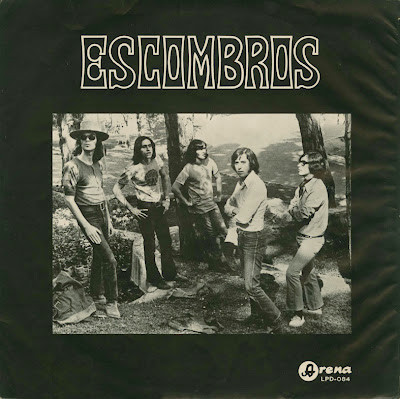 The album came out with 2 cover versions, the black & white one is the first pressing, the other version came later…
I don´t remember anymore why we did  even bother with the second cover style, cutting out our faces and placing them all over the cover, nobody liked this version really, hence the one with the black and white Photo of the band was the one which stuck in the end and was to everybody´s liking. 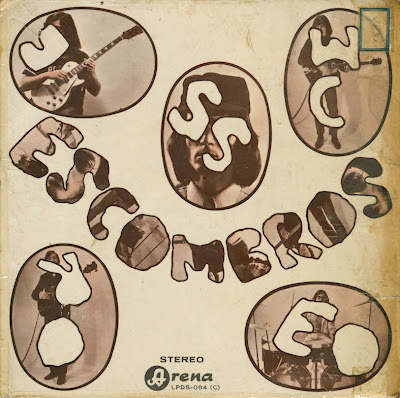 How many pressings were made on Arena label?
No idea, we were quite naive then, when it came to contract signing and other issues around an LP release. 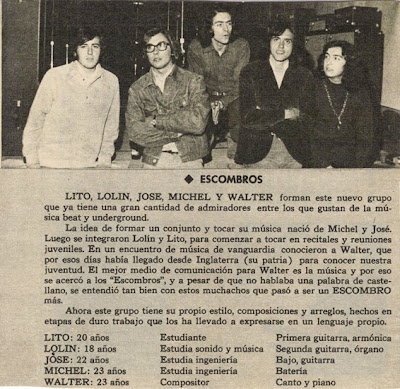 6. Did you do any concerts? 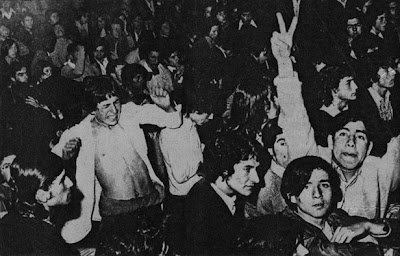 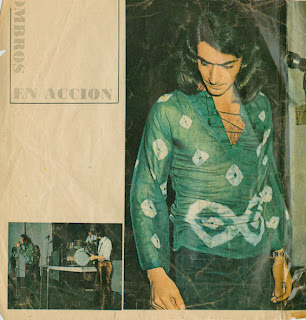 Yes, we played quite a few gigs In places all over Santiago in Bellas Artes (Art school of Santiago), Theatro Caupolican, Theatro Astor, Cine Marconi and in the Beach resort Zapajar and also Vina del Mar in the  Quinta Vergara (a famous open air place).  In some of the places they had to close the doors with chains to avoid more people coming in cause the venue was so overcrowded & sold out. Subsequently small riots started and some damages and so on… quite some exciting times to say the least…
7. What happened next for you?
I left end 1971 Chile, but recorded shortly before as well a single ‘Mi razon de vivir’ with ‘Destruccion Max’,  another rock group and returned back to Vienna to supposingly  join another band called C- Department (with members of Odysse my former band) which in the end never materialized. I then lived in  New York, the Caribbean (Jamaica, where I became friends as well with one of the Wailers, guitarplayer Marvin Jr, Bob Marley had unfortunately already passed on) Indochina (Laos), Southafrica, til I found my way back to Europe, Switzerland and finally Austria, Vienna, where I live again since 7 years. 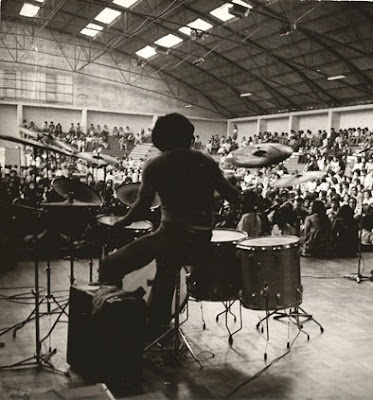 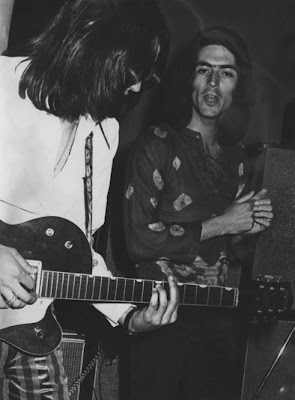 8. Miel is another group that is connected with Escombros…
As far as I know Miel was formed after I left Santiago. All the other members of the Escombros, except for Lito Benito  went different ways. Guitarplayer Ricardo Mendeville went to Amsterdam, drummer Michel Boisier started his engeneer career and bass player Jose Rosenblut his own business. Lead guitar player Lito Benito formed the band ‘Miel’, which did not last for to long, subsequently he turned to become an outstanding luthier working several years with Taylor guitars in the US of A and has his own company back in Chile called LBenito guitars.
9. What are you doing these days, Walter?
I  just finished my double CD plainly called  SITZMANN, ‘Heartbrakers & Soultakers’ , featuring the best musicians I could find in Rock and Classical music in this country. Volume I is called ‘slow on the take’ and are mainly very melodic rockballades and some bluesy stuff. Volume II is called ‘fast on the make’ and is more upbeat,  a mixture of rock, country and reggae tunes. The CD will be released hopefully in March 2012. Classic melodic rock was and still is very important to me versus all this computerized noise. That´s why I did, in addition to my own 27 songs as well 3 classic rock covers on the CD,  two are originally performed by the brilliant David Coverdale so it was quite a challenge for me. Just to mention  also some other musicians I admire today who can play and sing like hell, are: Richie Kotzen and Glenn Hughes, just wanted to single out two of the best, so my measurestick is very high as you can see.
10. Would you like to send a message to all It’s Psychedelic Baby readers?
Keep up high the real music, played by real musicians and not by computer folks which try to make music with the help of beat boxes, which basically is fine with me, cause it´s all music in the end, but THEY are not musicians, cause they have not mastered an instrument in hard practise over
15 years….Also stay away from pre-programmed play back performances, always look out for real life performances because only there  the real music lives on…
Wishing a great 2012 to you and all your readers I remain
One Love
Walter Sitzmann 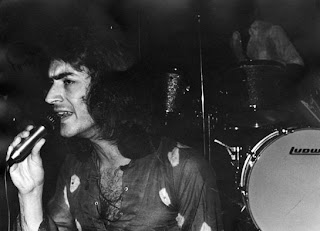