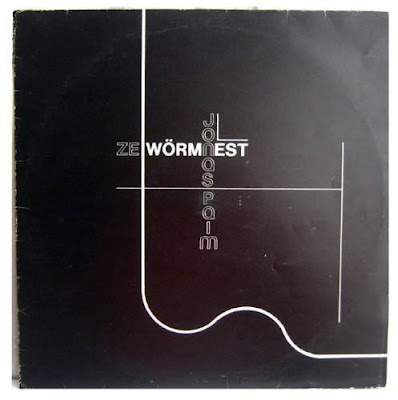 Interview:
Hi Jonas. I’m very pleased I have found you. There is so little known about you and I’m happy we can discuss about your music biography. I would like to ask you about the beginning. How/when and where did you start your music path?
My music path started in the late 1960’s learning to play alto saxophone, which I did for three years. During that time I came in contact with modern electronic music and the use of tape loops, which I explored a lot with one of my friends. Then I came across one of Tangerine Dream’s earlier albums which got me really interested in “atmospheric sounds” if you understand what I mean, and when I heard Phaedra (by that group) I knew I had to have a synthesizer. This was 1974. In 1976 I eventually could afford my first synth, a Korg 800DV.
Ze Wörmnest is the album you released in 1980. What were you doing before that? Were you in any other bands, projects…
Well, yes. I started playing with a lot of friends of mine but within different setups. With one we composed and recorded songs in a traditional rock context, with a couple of others it was pure improvisational music made on both instruments and what ever was at hand, and yet another setup was into electronica as it was at that time. Of all these setups nothing led to more than private recordings. Then I staretd to work on my own more and more which later in the 1970’s led to the formation of the shortlived Jonas Palm band. It was me on synth and pre-recorded tapes with Ecke Forsberg on bass and Per Gulbrandsen on drums. We played some gigs around Uppsala, where we lived and also had gone to school together. At this time I was studying at Uppsala university and then in 1979 I had to move to Copenhagen in Denmark in order to get the education I wanted. As it was difficult to get somewhere to live in Copenhagen I found a dorm i Lund across the water in Sweden. There I began recording what was to become Ze wörmnest.
So we are in 1980 and you released your only (?) album called Ze Wörmnest. I would like if you could tell us what are some of the influences behind the album. I would also like to know if you could share the story about producing and recording this album?
The influences which inspired me during the work with Ze wörmnest were mainly Tangerine Dream, another German group called Can and the Hungarian modern composer Györgi Legeti’s  compositions used by filmdirector Stanley Kubric in his movie 2001: a space odyssey. Some influences also came from Brian Eno and Robert Fripp (of King Crimson). As indicated the entire recording took place in my dorm, which was a small room with a bed, a desk, two chairs and my music equipment. It consisted of the Korg 800DV, a Korg MS10, a Hagström tape echo, a phase pedal, a simple JVC mixer and a stereo amp with speakers. The recording equipment was one Revox A77, an AKAI tape deck which was used for loooong tape loops with the Revox, and a semi-pro JVC portable cassette recorder. The recording was either done as ping pong recording between the Revox and the JVC, or loopes reorded with the Revox and the AKAI, of which some later were over dubbed. The last recording (to the mastertape) was always done on the Revox so tape editing could be made on the last copy. This technique required a lot of logistics most of the time but some times things just started as improvisations and the recording was done which ever way it came.
The album was released on Piglet Records, which was just started by a couple of the friends played with (improvisations) and Ze wörmnest became the second album on that label. 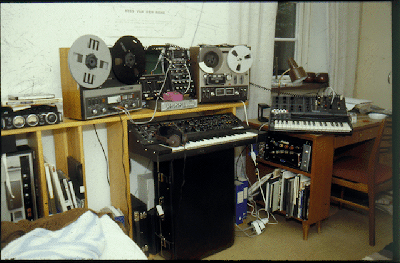 This is from my student room (you can spot the end of my bed lower left corner) From left to right a JVC semi pro cassette recorder, Studer’s Revox A77, a cheep equalizer, an analog delay (pink), mixer based on a passive JVC mixer and PAiA mixer  (a build-it-yourself mixer, they made synths also) put in a box, an Akai tape recorder and below the Korg 800DV and on the desk the Korg MS10. Under the Korg MS10 is the Hagström tape delay. Both synths as well as the tape delay were slightly modified, thus the not-off-the-shelf-looks. The 800 DV had some added extra inputs and sides taken off, the MS10 had been made collapsable like a Mini-Moog and the tape-delay had only been visually modified.
Do you perhaps know how many copies were made and what can you tell me about the cover artwork?
500 copies were made and were sold out fairly quickly. The cover art was done by me and very influenced by the German Bauhaus school (1930’s) aestetics. The idea with the blured picture was due to a friend who did the dubble exposure. I also designed the vinyl label, but was a bit disappointed with that. My idea was to have it as black as possible. Unfortunately the printer missinterpreted a line for being a white circle, which is was not… And also the Piglet logo did not really match the music so to speak. The concept of the artwork was to be used for a second album, wich was recorded but never released – untill a few weeks ago! More about that later.
Did you play at any concerts?
Yes, after the album was release I played some conserts, among others one live on radio at the Museum of Modern art in Stockholm, together with two other acts the Teddybjörn band and Jonas Hellborg, since long now a world famous jazz bass player.
What happened next for you?
I was then finnished with my studies and started to work and my daughter was born, all of which occupied most of my time. The album got some airplay in Sweden but most importantly a director (Peo Grape) at the time working with the Swedish public service radio SR, found out about it and used some of the music on the album for a radio theater play. After this we started to work together and did so on and off for thirteen years. We still do occationally. One play we worked together on (Norrskenets glömska – The oblivion of the Nordic light) got the bi-annual Nordic Radio Theater Prize 1993.
I started to play together with an old schoolmate (Frans Mossberg) who were playing Indian instruments in the late 1980’s. The setup was electronic sounds with Indian, and it eventually led to a gig, which unfortanately became the one and only since Frans moved to the very south of Sweden.
I continued to compose and still do but my releases are only home burnt CDs which I give to my friends. The composing is still a very important thing for me and I will probably keep on composing as long as I can do it.
What are you doing these days?
Today, apart from my professional life in a Swedish governmental agency, I continue to compose music. A very nice thing happened a few weeks ago when, quite suprisingly, my second album was released on vinly (Decompositions, Börft records) which is really a blast from the past! Similar kind of music as on Ze wörmnest but more rythms in it. My 30-years old recordings which was supposed to be the second album has been digitally rescued from a cassette tape as the master tape disappeared some time since 1981. Now finally it is out there! And the cover design is in the same format as on Ze wörmnest.
Thanks so much for your time and effort. Would you like to share anything else?
As the image on the album is blurred I will add a recent phot of me 😉
Thanks for the interest in Ze wörmnest and my music. I really feel honored of this interest!
All the best
Jonas 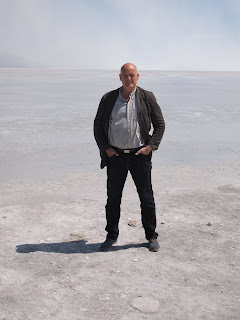