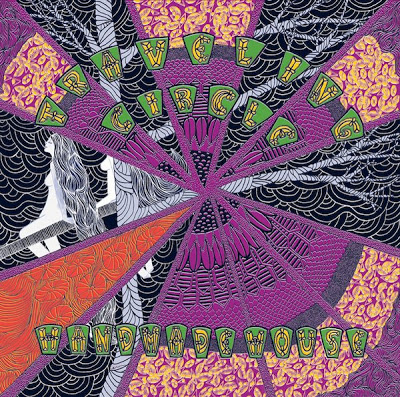 Thank you very much for agreeing to do this interview! When and where was Traveling Circle born?
Charlie: Thank You! The three of us got talking at a party in Brooklyn one night and the next morning we were jamming, despite the hangovers. That was about 4 years ago now.
Dylan: That tradition of morning jams lives on. I believe we’re still the only Brooklyn psych rock band that wakes up at 10am on Sunday mornings to rehearse, hung over or not.
Josh: I wish we could play shows in the morning. I hereby trademark 10am shows.
Tell us about the beginning of the band? 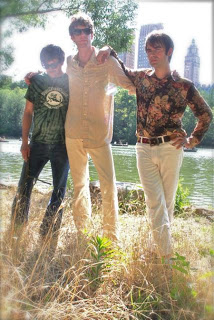 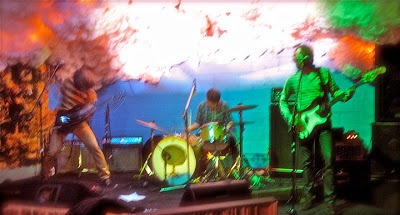 How about some future plans for the band? Maybe see you in Europe at Metelkova (Ljubljana)
Dylan: Metelkova? I don’t know what that is…but I like it.
Charlie: We have a new album in the works right now called Escape From Black Cloud. It’s a natural progression from the first record. I think the three of us have come in to our own a lot more on the new songs and I can’t wait for people to hear them!
Dylan: My wife and I have a map of Ljubljana on our fridge. We would love to come play there. Maybe if Escape From Black Cloud gets some recognition and the right push you will be seeing us there soon.
Josh: The new record is going to flip some lids! It’s more driving and darker. Listen for some Theremin from a guy named Matt Dallow. It would be marvelous to play the new songs in Slovenia! We have received a good response overseas and it would be pretty natural for us to tour in Europe.
What is your opinion about the psychedelic scene these days?
Charlie: In terms of New York, there’s a lot of great bands that we’ve had opportunity to share bills with: Naam, Weird Owl, Heavy Hands, Strange Haze, and La Otracina, just to name a few.
Dylan: There are some pretty good psych bands in NYC but I’ve always felt like we belong to a more foreign music scene. In Europe there seems to be a real force to proactively seek out psychedelic and progressive music and support kindred weirdness. We’re getting greater reception from that side of the globe.
Josh: There are some pretty cool bands around for sure. I just caught a really good Brooklyn Raga Association show. We have had a fair amount of radio play on a program called Sunrise Ocean Bender. You can listen to the archives here: http://mratavist.wordpress.com/the-sunrise-ocean-bender/ It’s a really good place to check out new music with psychedelic and progressive leanings. You’ll hear newer stuff like Acid Mothers Temple and Sula Bassana. You’ll also hear a lot of far-out classic stuff like Amon Düül or Tomorrow. I picked up an LP from the French progressive band Pulsar called “Pollen” from 1975 after hearing it first on Sunrise Ocean Bender. That record is awesome! You can hear a lot of brand new bands there too, even bands without records yet.
It’s really hard to say much about the scene overall. Some stuff is really good out there. It’s wonderful that Nasoni Records is around. We have been really lucky to work with them. It’s great that there are sites like yours digging into the current psych scene and getting the word out. I enjoyed reading your interview with Beggar’s Opera. I also read the Tír na nÓg interview that was up. That aspect of the scene is very encouraging.
Thank you very much for your time and effort.
Dylan: Thank you and happy traveling.
Josh: Thanks so much for interviewing us! Thanks for giving our record a listen!
Charlie: Thanks! Hopefully we’ll see you in Ljubljana soon!
– Klemen Breznikar 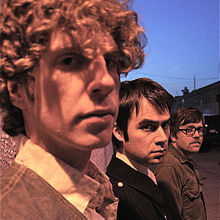