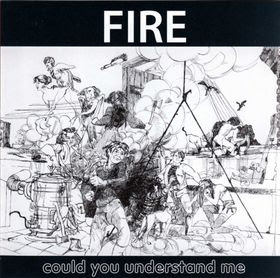 One of the fiercest and most loud yu rock bands, Fire has sprung just here in my town, Čakovec. Yes, it was 1973., and Yugoslavia has already cracked some of its top aces such as Grupa 220, Time or Pop mašina. Band Jutro was also playing here, the band which will soon become Bijelo Dugme. However, despite all the number of decibels that were coming out from the amplifier of the band Fire, a small number of people heard them here. It certainly contributes to the fact that their lyrics were mostly in English ((as in Yugoslavia that was a rarity) and on the other hand their music was a little bit too much “underground” for people’s taste then. Of course there were bands with similar musical preferences, but they all more or less opportunistically adhere to a compromise with the record companies who wanted their piece of the pie, so they forced bands to record pure pop songs as possible hits. This is precisely the reason why serious Yugoslav rock audience those days listened mostly to B-sides of singles, because only there the band sounded exactly as they wanted to. In desire for commercial success, pop songs were recorded by Korni Grupa who were otherwise inclined jazz-rock, Bijelo Dugme (clones of Led Zeppelin), and even Time, great Yugoslavian prog rock band. However, Fire were uncompromising – they rather went into exile in Holland, where they recorded “Could you understand me”. Fire followed the tradition of power trios such as the Jimi Hendrix Experience, Cream, Groundhogs, Taste, Grand Funk Railroad … only they were a little fiercer sounding about like Truth and Janey few years later. Explosive fuzz, riffs, solos which growl like mad dogs, maniacal drumming – that’s how we could describe their music. Approximately that’s how at the time sounded Four Levels of Existence from Greece (which they are often compared with), Tiger B. Smith from Germany, Terje Jesper & Joachim from Denmark, and their countrymen Pop Mašina too. And so, since no gigs in the Netherlands, nor in Germany did not result with success, at the end of the 1976 they returned home, where they recorded the single “If You’re Alone”, which is quite a good fit in the concept of pre-recorded LP. But then strange things started happening – they entered a strange symbiosis with a band Demoni, and for some time even played entitled Demoni – Fire, but in the end that setup again was just called Demoni. The previous sound was drowned and attenuated by the new pop rock orientation which Demoni are gone, though I must say that their first album, released in 1978th is definitely worth listening to. But this story is certainly not over. Fire plays again, so I saw them this winter in a nearby club. True, Jura Havidić (guitar and vocals) is the only original member that remained, no matter – they played all the old numbers from Dutch LP with occasional rock classics. As the night progressed, more and more it seemed to me that the old man who holds the guitar is little by little becoming a long – haired young man who once again with furious sounds of his faithful guitar conflicts the world.
– Martin Okun
FireMartin OkunReviews