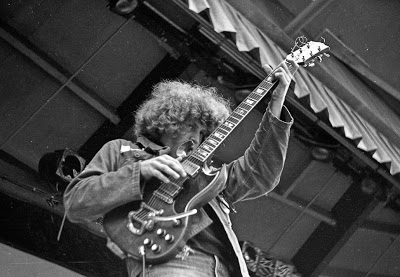 Thank you very much for agreeing to this interview, Barry. What can you tell me about your new project you started with Stephan Missri, called Jamasutra? How did it all started?
Several years ago, I had a booking in Paris. I could not afford to bring in my own band from England, and my booking agent assembled a backup band of Musicians from Paris. Among the band members were guitarist, Stephan Missri, and drummer, Christophe Rossi. We thought what we were doing sounded good. It sounded unique and blended well, despite the fact we had never met each other and we had never rehearsed. We made plans to work again the following year and we eventually decided to record together under the name “Jamasutra.”
Jamasutra released brand new album called Revolution Down the Road. How and where did you record it?
The album was recorded in a studio in Chennevières, in Val-de-Marne, just outside of Paris. I flew back and forth from the United States three times to record it.
What can you tell me about Stephan Missri? How did you get the idea to record an album together?
Stephan Missri lives just outside of Paris and is constantly in demand as a guitarist throughout France, Germany, the Netherlands and Spain. He is incredibly talented and has a range of styles from Gypsy music to American “Country Music.” In fact, he has also played banjo in one of France’s top Bluegrass bands. I think we kind of instantly connected as guitarists – it was magical. I am very proud to be working with Stephan on this album; and I believe his talents as a singer and songwriter are evident from listing to the Jamasutra album. It amazes me that it took Stephan so long to release his incredible material.
Along with you and Stephan on guitar, there is Charles Jannic on bass and Christophe Rossi on drums. How do you like the lineup?
Christophe Rossi is best known to French music lovers as an editor of “Batteur,” the French drumming magazine; he is a solid drummer with an extraordinary range of experience. Charles Jannic is Danish and, without doubt, he is a bassist of extraordinary talent. What really matters with Christophe and Charles is the very special level of communication they enjoy on a musical level. In fact, because much of what we do is improvisational, it is the extraordinary level of communication we enjoy as a band that makes Jamasutra so very special.
Are you satisfied with how it turned out?
I am very satisfied with how the first Jamasutra album turned out. I think it is a great debut album. Hopefully, this album will be successful enough to afford us the opportunity to make another album, because we are so new at this, we can only get better.
I really enjoy the feel of “middle eastern” music on your album. It was probably great experience for you to record with these guys.
I am really proud of the fact that I am one of the first musicians to bring Middle-Eastern, Indian and Japanese influences into rock music, back in the 1960’s. It seemed like a huge step at the time, bringing world music influences into a music founded on the blues. Now, rock has spread all over the world and is influenced by whatever culture the musicians who play it come from. I had the opportunity last year to play with the Banglumpoo Band, one of Thailand’s great blues bands and they are extraordinary in their ability to meld a solid blues beat with Thai lyrics (they also are adept at playing American blues music and, with a blindfold, the average listener would likely believe they came from Alabama, Chicago or Mississippi).
What are future plans for the band? New album? Tour?
I am very much hopeful that “Revolution Down the Road” will bring enough success to Jamasutra to demand another album. If we are fortunate with this release, we would hope to be playing in Europe later this year.
Are you preparing any other projects besides Jamasutra, perhaps?
I have a live video DVD project I am hoping to finish this year. And, of course, I continue to write music and songs and don’t intend to stop!
Many thanks for you time and effort, Barry. Do you have anything else to say about the band or yourself, that I didn’t ask?
I am really happy to see the young people of the world coming together and demanding freedom. I have been a part of that struggle all of my life. We can make this a better world, if we work together.
Thank you, Klemen, for this opportunity to share my thoughts. You can order Jamasutra CD here!
– Klemen Breznikar
Barry The Fish MeltonCountry Joe and the FishInterviewJamasutraKlemen Breznikar