When we came out after the show – we had a flat tire. Doing all that high speed driving eventually had a price. I got 3 speeding tickets one weekend and had to hire a lawyer to keep my license.
Did you ever appeared on TV?
My TV Experiences were never with Haystacks Balboa. In 1966, I played on Zacherly’s Disco Teen which was on a small NY Channel. The only other time I appeared on TV was when I filled in with a Latin band called Orchestra Flamboyant with Eddie Palmieri and his brother at the Puerto Rican Day concert in Central Park.
The album was released in 1970. What happened next?
After our second album (called Mercury) stayed on the shelves we wound up playing the NY Club Scene at such hot spots as Max’s Kansas City and The Great Gildersleeves. We became regulars at the Bitter End and Kenney’s Castaways. Sadly, I parted ways with Lloyd Landesman. His musical tastes and mine were really going in different directions. Lloyd enjoyed the virtuous keyboard players of the time, like Keith Emerson, where I was starting to be more influenced by Marvin Gay and Jeff Beck. Mark Polott and I have stayed together all of these years. We’ve composed radio jingles, video soundtracks and written hundreds of songs for ourselves and for other bands, including released recordings by the Brats, “If You Can’t Rock You Can Roll”, “First Rock Star on the Moon” and “Dancing In the Back Seat”.
Are you still in contact with other members of the band? I know that you and Mark Pollot are in new band called Urban Blue.Can you tell me more about your new project etc.
Mark Polott, my writing and musical partner for over 40 years is an usually inspiring partner. He has remained faithful to our mutual efforts for all of these years. Additionally – he was raised on all the same music as I was and we have an enormous overlap of musical tastes and inspirations. Beyond that – I can only say that I try to create good music with him because when he says it sounds good – that means a lot to me. We have evolved quite a bit over the years. We no longer have a psychedelic overtone. Instead, we have become a heavy blues band with jazzy overtones. Over the decades, we’ve had many iterations of our sound. One band, Raccoon Lodge had 4 horns. I loved that big sound and writing for it. Then came Urban Blue. The CD is available online. There are many beautiful songs on it, including the CD Title track, “It’s Different Today”, dedicated to the 9/11 tragedy. Today we perform regularly at B.B. King’s on 42nd Street featuring our really prolific sax player, Lars Haake. He is amazing – and he pushes me to many nice sounds. A great blend of blues and jazz – that’s the sound of Urban Blue.
Do you have anything else to say about the band or yourself, that I didn’t ask?
I’ve come to feel that any artist can only do one thing… create, create and perform. If those efforts bring about financial success – great. If not, there’s nothing more rewarding than digging down into the well within ourselves to pull out the creativity that lies there bubbling, waiting to come out. And to simply enjoy that.
The official site URBAN BLUE 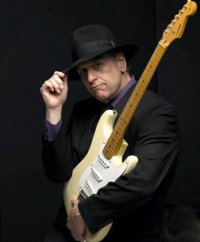