The C.A. Quintet’s journey to Hades burned hot enough to melt the ice in their frigid Minnesota environs.

You made one of the crown jewels of psych music. Why do you think it didn’t sell? Do you think it was problem with advertisement or that the album was way ahead of its time?

Actually the album sold very well where it was available … The first batch of records 600-700 copies sold out in the first day or two it was in the record stores…. The problems were multiple… the record label (Candy Floss) was a small local company with no national distribution …. Thus, the record was only placed in local record stores in Minnesota… In addition, the person running Candy Floss had no idea what we had produced. His name was Peter Steinberg. He was only interested in making money (which he never did ) and preferred the mindless “bubble gum” type of music. He only allowed us to record this as kind of an amusement. He owed us a lot of studio time and we used the time to create the album. Peter was never involved in the any manner with the production of the music/album. Furthermore, he wasn’t smart enough to recognize the demand for the album and thus had no more produced after the initial pressing. Peter was so unwise, he didn’t even keep a copy of the album for himself.( I kept 25) I did see a check made out to the C.A.Quintet for $1200 for royalties for the first and last pressing. Peter stole the money and kept it for himself. It is kind of ironic that a single album now sells for more than $1200. What goes around comes around. But, at the time we were just young kids having fun making music and didn’t pay attention to the business end of things ( sound familiar ? ) In retrospect there is no price tag that could put on the value of the times we had…. We have no regrets..

I’m not sure I had a “main influence”….. I started listening to Rock and Roll around 1954 -55 … I used to hang around the Radio and listen… I loved that era of Rock and Roll.. at the same time I was being influenced by Jazz from my father and Uncle ( Pee Wee Erwin ) as well as Classical music… I was active singing in choirs as well as playing trumpet in the school bands… I taught myself guitar around 9th grade and that eventually became my main instrument.. I was just a bowl of mixed up flavors …. Everything from Ray Charles to Hendrix to Beethoven to Buddy Holly to Tommy Dorsey… all I knew was I wanted to strike out in a different creative direction… 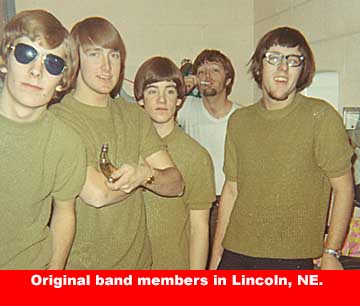 What else beside music did influence you to record Trip Thru Hell?

I realized where I lived…. I looked around …planet Earth certainly qualified as “Hell”… for groups.. and some individual “hells”…. But then I think a person can make the best of it and enjoy life as well here… there is plenty to enjoy…. Like music… I have always been a philosophy buff… and thought about things like that… I’ve said this before… but what a perfect trap… the prisoners voluntarily keep themselves locked in… and there are a lot of false paths that one could follow to “get out”…. That is all I want to say about that…

What are some memories from recording and producing the LP?

The album was recorded on a 4 track Studio Ampex recorder… ( The same machine as Sgt. Pepper was recorded on) all analog…with over-dubbing ….. Yes Jim’s bass playing was the foundation upon which all the rest of the music was laid upon… Gibson Hollow body if I recall … he would know…. Tom Pohling played a fender of course… all your standard instruments for the time.

There aren’t any love songs on the album. In fact there is a concept behind the album.

I did have the idea of connecting all the music together from the beginning … I was writing some music that all seemed to belong to a theme… sometimes it just happens that way… yes no silly love songs… not that there is anything wrong with them…they just didn’t fit… it would be like bringing Laurel and Hardy in a scary movie…. Just no fit… I wanted to create something that was difficult to duplicate in your mind so … you would hear something different each time you listened to it and not tire of it… later on I fell in love with the Dark Side of the Moon for the same reason… they really nailed it… they had a much bigger budget, better technology and made wonderful use of it… not to mention the creativity they used… 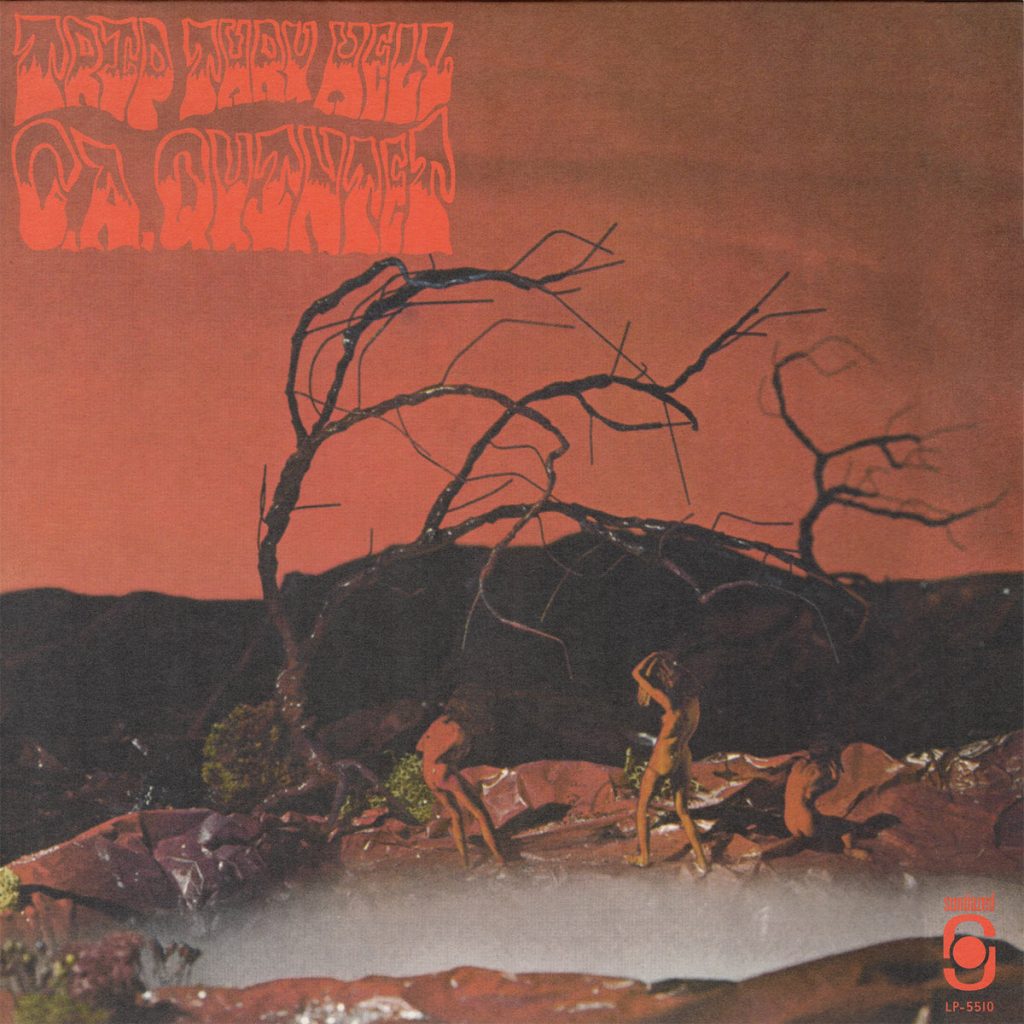 700 copies were pressed. Sundazed reissued it.

I put 25 copies away when the album was released… I thought when I had kids some day ( god help me not 25) they might enjoy a copy… over the years I gave a number away and still have a few copies…. I did help Sundazed with the CD… Bob Irwin is a master at what he does…. I couldn’t have asked for a better production than what he did.

What can you tell me about ”live record” you did back in 1971? It was released on a private label.

Well the last night we played… I tossed a couple of microphones on the floor in front of the band and recorded on a small reel to reel Sony tape recorder… just like taking a photo … we had no idea that night that anyone would ever care about the C.A. Quintet…. I tucked it away and years later came across it…. too bad we didn’t know then what we know now… we would have brought in a professional recording outfit to record the night…. But it is what it is… by then we were down to 4 guys and I was playing bass…most of this is recorded on the liner notes of that and the “Last Trip at lake Pepin”…. That album is not a bootleg…. When we put out the first live album , there were parts of the music so out of balance… there was no way to remix them… and make them any better… “Pepin” was my attempt to remix those songs as best I could with current technology… (I especially like the song Badge that Doug Reynolds sings).

Were you in any bands before C.A.Quintet? What are you doing these days?

Yes I was in bands before the C.A.Quintet.. I think the first band I played in was when I was perhaps 13 or 14… we played for parties … mostly in the basements of kid’s houses…eventually you gravitate to playing with better more dedicated musicians and by the time I was in high school I was playing professionally with some pretty good musicians… the only member of the C.A. Quintet that was with me from the very early days was my brother Jim… he and I stuck together… ( we still do )… I have had a number of professions over the years… after the C.A. Quintet I played in a club band for a few years … until 1973… then one day I got tired of playing other people’s music and just left the music business altogether…. I continued to write music and play for myself… but never again for money…. To support myself I taught computer science in college… worked as a manager for a major corporation (that job stunk) and then formed my own little business which I still continue to operate to this day… but I am getting on in years now and prefer to not work so hard…. I bought some beautiful wooded land in the early 70s and have been building my own little paradise out here since… I guess you could almost classify me as a semi-recluse…. I have no desire for fame … that is for sure…

Are you still in contact with other members of the band?

We are still in contact Jim, Doug and Rick Johnson. Rick played most of the drum parts on the album…. but was not credited for it for some reason… I had little to do with the album design… Rod Eaton did that… just an oversight… as Rick Johnson was no longer with the band when the album was finished… We were inducted into the Midwest Rock and Roll hall of fame a couple of years ago… we got together for that night and played a few songs… the other guys still play around town with other groups…. I will never play for an audience again… I am retired… the only thing I would consider is recording some music if the right situation came along….

Well you did a nice job of forming some questions…. I hope I answered them to your satisfaction…. I have done so many interviews that I am sure I am repeating myself… you can probably find other interviews around with a little search…. The liner notes in the CD are pretty nice…. I am impressed and wish you all the best with your life… I am sure you will do well…. I visited Russia about 15 years ago and have a special affinity for the people and the whole region…