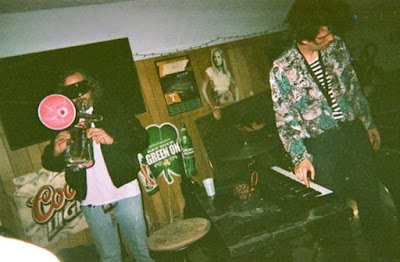 “We want to be free but we’re not”
Crazy Doberman is a black hole free jazz band from LaFayette Indiana. They released about 15 records in one year.
Could you define Crazy Doberman for me?
Jason Filer: Crazy Doberman is non-spacialized Time with a capital T, as in T. Swift (the sacrificial lamb).
Jordan Allen: Crazy Doberman is a collectively derived offering; reactionary of the moment. Aspiring journeys of consciousness inspire the individual differences in realization of this.
John Olson: CD is a Midwestern free basement language that was formed from live experiences and is a ongoing network of a leaderless sound that is spray painted in abstraction and grey days. What I personally do in this band is react to all the corners of the spontaneous atmosphere and rub grit into the seams.
What is that you do with this band?
Jordan: I assist, as we all do, in gathering pieces of the zeitgeist both similar and divergent in interpretation and delivery.
What sort of music do you play?
John: Free music based on a shared local environment.
What sound are you looking for?
John: The sound is what naturally comes out of our region and friendships.
Jason: The sounds resist sortment in the same way a Christ resists Emojis with a capital E, as in Eternal (Empty).
What is ‘your sound’?
Jordan: At any given moment the reflection of sound from sight may be distorted by emotion, plucked violently from the ether or calmed by lysergic exaltation.
What’s the difference between Doberman and Crazy Doberman?
Jason: The difference between Crazy Doberman and Doberman is Time (Time made us crazy).
John: Doberman was first creation, Crazy is when the ‘thing’ is let loose into the ether.
Aaron Zernack: I’d say Doberman was the four piece always. Had that concrete dynamic, occasional collaborators but always had the same crew. Then played the show with Olson and it was a big step to see if he wanted to jam a set together (which became Hell is Within Us). Followed up soon after by the gig in Indy which solidified the Crazy Doberman concept and even then had people jumping on and playing with, even crowd slamming around metal and junk. Seems like CD is more of an idea which is open to any like minds. Any lineup can be Crazy Doberman if it actually is Crazy Doberman. 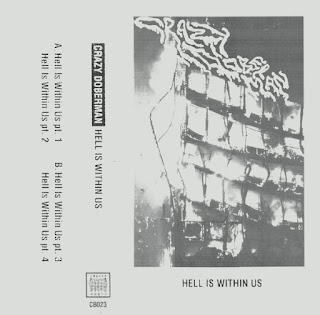 Is everything that Crazy Doberman does improvised?
John: Yes, but there is a common instrumental language, we are all very well versed in each others playing & non playing. Very much a ‘band’ : The depth of the all the gigs makes its own course.
Jason: There are no prior agreements because Time has exposed our obligations as temporal.
How did the free jazz influences get into the music?
Jason: We like free jazz because we are Jazz with a capital J, like Jesus or John Olson and we want to be free but we’re not, because of Time. Help us please.
John: It’s not so much free jazz as it’s the acoustic instruments involved ie reeds and brass. There are not really solos and individual players peeping thru the rotten mist, more of a downer group sound with as many details to flesh out the chapters as possible. More akin to hearing a conversation three rooms over and not being sure of how many people are in the space. ‘Free Jazz’ has its own system, we are aware of this and try to be as contrary as possible.
Crazy Doberman released about 15 records in a year or so, so what’s the value of a record? Documenting yourself?
John: The value of a record is a document of the experience and to put as many pages in the book as possible, the more laid out the the more roads to travel and to not travel. It’s a common misconception that you have to peep all the releases but in reality, pick and choose. In thirty years, the more put into the machine, the more it makes less sense. The allure of DIY is that you CAN do these things, plot your own course.
Zeno Ben-Amotz: If you ask the owner of an orchard “What is the value of a single orange?” they will tell you one thing. The man loading and unloading the orange truck everyday will have a different answer. A child who has just tasted their first orange will offer yet another perspective… All of them are probably wrong.
Jason: The Value (with a capital V, as in Vital) of a record is usually between $10 and $30, but Crazy Doberman exists outside value judgements. 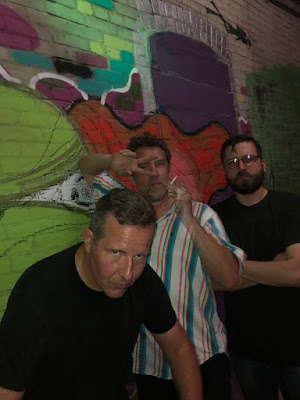 Are all the Crazy Doberman releases live recordings (with or without an audience)?
John: No. Recently in Indiana we did two gigs where there was no clear end or beginning, audience came and went in the middle with no fan fare so the boundaries of a ‘gig’ and ‘studio’ are nearly no difference. The jam started to no one and ended to no one, which was very interesting in terms of playing, the traditional ‘climax’ never happens or threatens to happen, which effects the group dynamic 100%. It took awhile to get that point and feels great.
Jason: The records have an audience if you listen. Listen.
– Joeri Bruyninckx
© Copyright http://www.psychedelicbabymag.com/2018
Crazy DobermanInterviewJoeri Bruyninckx