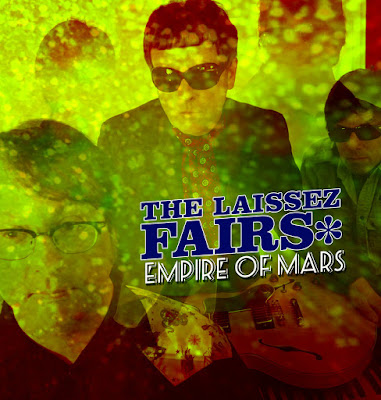 The Laissez Fairs “Empire Of Mars” (RUM BAR Records, 2018)
https://rumbarrecords.bandcamp.com/album/empire-of-mars
The third album by Las Vegas psychedelic mod rockers The Laissez Fairs is truly a band effort, with vocalist/guitarist/bassist/drummer John Fallon and vocalist/12-string guitarist/keyboardist Joe Lawless contributing five tracks each to “Empire Of Mars.” Appearing on RUM BAR Records this CD release was, like its predecessor, recorded at Lawless Noise And Visions in Las Vegas, but this time produced by the band themselves.
The ten tracks, thirty-eight minutes run time, comprising “Empire Of Mars” are consistent and rock more than the band’s predecessor “Target On My Back.” The musicianship and songwriting shines from beginning to end, proof positive that The Laissez Fairs are among the top psychedelic mod rock bands on the scene today.
The opening track, Fallon’s “High Horse” combines 6 and 12-string guitars in just the right mixture, the song’s sound phased with incredible care and the vocals echoed to perfection. The tune’s trippy lyrics and tasteful feedback give it a Beatlesque texture with the lead guitar line strong throughout. Lawless’ “Like Mrs. Peel In Leather” has a heavy guitar intro, with driving, stabbing lead guitar to the fore and a tasty solo about two minutes in. The sound builds to a cacophony outro. Fallon’s “Wanna Make You Mine” is a three minute heavy rocker, with insistent rhythm and cutting lead guitars from start to finish. The mid-tune guitar solo is tastefully restrained. A smoking track, the guitars are nicely distorted, while the pounding drums come through crystal clear, while the repeated “help me” refrain adds ambience. Lawless’ “Almost Got You Made” has another wonderful guitar intro, clean and crisp. The lead line rocks hard, while the “almost got you made, hey” refrain is hypnotic. The song takes on an Anglophile Yardbirds’ feel with the addition of sitar work by Barnaby Gallagher, making this a special treat. Side one closer, Fallon’s “Silhouette Suzy” features more heavy guitars which drive the beat. The guitar solo at the 1:45 mark is clean and effortless, the result being prototypical heavy mod psych delivered effortlessly.
Side two opens with the CD’s title track, written by Fallon. Another driving rocker with nicely distorted guitars, the swirling lead line is especially tasteful. Pounding drums and handclaps add percussion to the mix and the keyboards are a wonderful addition, giving the song a bagpipe like sound. “Empire Of Mars” indeed has all the elements of a classic rock tune. Lawless’ “Higher Than You Meant To” again does a wonderful job of mixing 6 and 12-string guitars, with more stinging lead guitar. The mid-tune solo soars over the top of the track’s gorgeous vocals. Fallon’s “Moving So Slow” is a real change of pace with its gentle acoustic guitar intro resulting in a Bowiesque sound. This would have fit nicely on “Ziggy” with beautifully echoed vocals, the sound rolling gently, the guitars and keyboards mixed exquisitely. Lawless’ “A Girl Insane” is notable for its power chords and echoed vocals, while retaining a gentle feel. The 12-string fits perfectly with the song’s keyboards, a combination again harkening to the classic mod psych sound of years gone by. The album closer, and its longest track at five and a half minutes, is Lawless’ “Again Again Again” with its drum and bass intro before the guitar winds its way into the melody resulting in a dance groove vibe. Yet another beautiful lead guitar line is joined by flawless drumming. The guitar solo soars over the top yet remains tastefully restrained. The sound builds and builds to near crescendo level, with guitars appearing everywhere in the mix. A heavy rocking perfect closer for this wonderful album.
“Empire Of Mars” builds on The Laissez Fairs’ two earlier albums as the band’s recorded legacy grows, both in size and in quality. With a single due out soon, it will be interesting to see what Fallon and Lawless do for an encore. It will be difficult to top this release, but to this point the band has consistently been up to the challenge, so I anxiously await the arrival of their upcoming 45. Meanwhile, if you are a fan of mod psychedelic rock be sure to pick up a copy of “Empire Of Mars” and if you don’t already have its predecessor “Target On My Back” in your collection pick the LP up before it goes out of print and prices soar. My hat is off to John Fallon and Joe Lawless for another job well done. The Laissez Fairs are indeed among the upper echelon of contemporary mod psychedelic rock bands and deserve all the accolades they receive. Bravo!
-Kevin Rathert
© Copyright http://www.psychedelicbabymag.com/2018
Kevin RathertReviewsThe Laissez Fairs