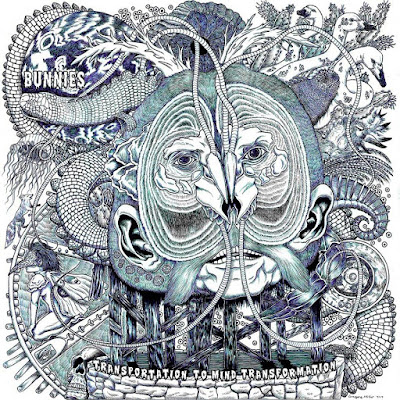 BUNNIES “The Problem With Link Think” off their new album, Transportation To Mind Transformation


Quote from drummer, Matt Newman, about the new album:
“This album suggests two ways of using our minds to enhance our collective future. Connecting your mind to another’s closes the door of isolation. Disconnecting your mind from other’s opens the door to yourself.”
Transportation To Mind Transformation was recorded by Justin Pizzoferrato (long time engineer for Dinosaur Jr., Parquet Courts, Sonic Youth, Speedy Ortiz, Pixies, Elder, Free Kitten and many more)
Every transcendent psychedelic rock song deserves a sublime video – a video that amplifies the delicious weirdness of the music. However not every psych act is lucky enough to get a clip like that. But BUNNIES, a wonderfully zonked experimental band from Northampton, Massachusetts, has certain built-in advantages. Their drummer is Matthew Newman, aka Mount Emult, a director who has shot wigged-out clips for Pixies, Panda Bear (of Animal Collective), Dying Fetus, Dance Gavin Dance and other adventurous pop acts – and his presence in the fold means that they’ve got a pretty good idea about how to present their visions in vivid color. More saliently, the music that the band makes is so rich and hypnotic that it practically conjures hallucinations on its own. What director wouldn’t want to affix visuals (in this case the wildly artful Opertura, whose videos have been seen on Stereogum, Noisey, Pitchfork, Juxtapoz, Boooooom and okayplayer) to a song as mesmerizing as “The Problem With Link Think”?
BUNNIES is co-fronted by Jeremy Dubs and Jack Science, the possessors of unforgettably eerie voices and true originals on the Western Massachusetts rock scene. Those familiar with the Northampton underground rock will recognize Dubs and Science from Speak!, Severe Severe, Rabbit Rabbit and their collaborations with R. Stevie Moore; that was Dubs singing the chorus on the Pixies’s “Bagboy”, too. With BUNNIES, the dynamic duo of Dubs and Science have helmed some of the most deliciously psychedelic projects ever to come from the Pioneer Valley, including the Roger Miller-produced Music For Dinosaurs By Dinosaurs and the proggy Devoted To The Process Of Action. These albums are dark voyages, and the new album Transportation To Mind Transformation promises to be the band’s boldest, deepest journey into inner-space yet. “The Problem With Link Think”, a two-minute paint-swirl of guitars, synthesizers, and otherworldly voices, is a pretty good indication of where Bunnies is going: directly into your strangest dreams. 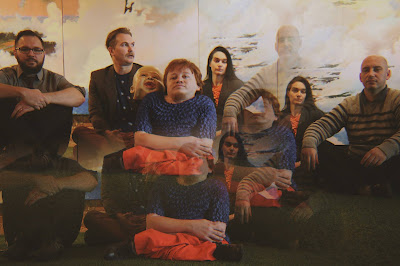 To make the clip for “Problem”, BUNNIES have turned to another team of Western Massachusetts visionaries. Opertura – the collaboration between artists and animators Aya Yamasaki and Jason Brown – have been celebrated for animation that stretch the boundaries of reality like silly putty. In the clip, a pair of grinning kids – and a horned monster – order octopus balls at a restaurant. But before they get dinner, they’re drawn into a pulsating world of glistening undergrowth and checkerboard-tablecloth skies. In its seamless amalgam of danger and pleasure, whimsy and gravity, it’s a perfect match for the music of BUNNIES.
Official Website
BUNNIESPremieres