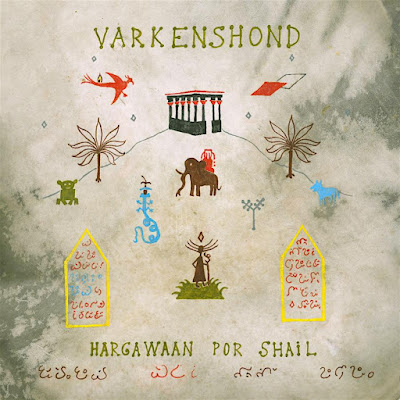 “Pan-ethnic ritual improvisation”
Hargawaan Por Shail by Varkenshond is a beautiful, mystical record of improvisations based on structures and tunes from different parts of the world, released by the always excellent Aguirre Records.
Is Varkenshond a ‘real’ band? Or more of a project?
Pichap: It’s a musical project of a religious group. Some members play in normal groups. Varkenshond used to have artistic ideas about music, but after some changes in line up and new spiritual growth we now make music mostly out of philosophical ideas.

Most free improv folk groups release a lot, Varkenshond has a very limited discography of three releases. Why is that? Are you very critical? Why are you very selective with your output?
We all have jobs and families, and nowadays we see each other regularly in ‘spiritual’ settings. Sometimes we play music in these settings, and every once in a while we record some of that music. When the recordings pile up, sometimes an idea comes up for an album.

I often don’t know what I’m listening to when I listen to your LP. I mean: I don’t recognise the instruments.
Most things you hear are actual instruments. A lot of them are ethnic, like the xiou from China. The life hooter is a very rare wind instrument, originally from Russia, that you can hear on “Phopa Pajrra”.
Do you sometimes build your own instruments?
No, there are no homemade instruments on this album.

The main instrument I hear on this LP is the flute. Why is the flute such a prominent instrument on this recording? Who’s the flute player?
On this album we worked together with flute player Yori Yoki, who also plays percussion on a few tracks. Part of the idea for this album was to make a selection of pieces we did with him.
What does the title of the album refer to?
“Hargawaan Por Shail” (pronounce Hargawaan Por Sha-ool) is Qamkanaya for “break the neck of the Shal”. Shal is the ritual ‘scapegoat’ Bargosh. It means “get rid of the old, rotten self to become new”. For us, the Támoldut idea of getting rid of arbitrary ties and change your path to be connected to both high (the High Ineffable) and low (Krildin) is essential.
Are the recordings on this album your own compositions? Or are improvisations?
All of the tracks are improvisations based on structures and tunes from different parts of the world. We always used the traditional instrumentations connected to the original borrowed material.

There’s a part of Vakrenshond that I can relate to, that reminds of a lot of free folk from Finland, the US and the UK from about ten to fiften years ago: bands like Sunburned Hand Of The Man, A Band, The Anaksimandros, stuff like that. On the other hand, there’s a lot of stuff in Varkenshond I can not relate to, maybe because I don’t know much about non-Western music. So can you place Varkenshond for me? Where would you put Varkenshond within the ‘musical landscape’?
I would say our music is “pan-ethnic ritual improvisation”. This might not help, because there are different styles involved, and it’s definitely non-Western, but I don’t know how to be more specific. We could mention the exact cultures and locations where our material comes from on our albums, but we want people to experience the soul of the music without thinking about ethnomusicology or the image they might have of a certain culture. 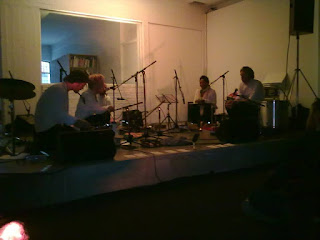 © Yves Dingens
I have the impression that this music has two sides: there’s a ‘light’ sight; esoteric, spacious. But there’s also a ‘dark’ side, like I’m witnessing some ritual that I don’t understand, which makes me think: “What the hell’s going on here?”. So I was wondering: is that a contrast you’re deliberately looking for: the light AND the dark?
I think that’s deliberate, yes, although it’s not necessarily a contrast. We don’t believe that there is a good apart from the bad, a light apart from the dark, a high without low, a happy without sad, a comfort without fear.
varkenshond.bandcamp.com
– Joeri Bruyninckx
© Copyright http://www.psychedelicbabymag.com/2017
InterviewJoeri BruyninckxVarkenshond