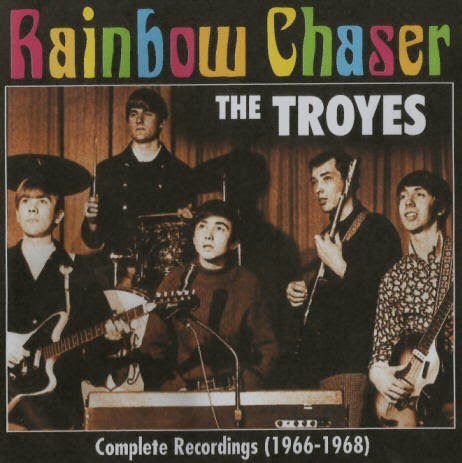 The Troyes “Rainbow Chaser” (Cicadelic Records
2014)
Based in Battle Creek, Michigan, the Troyes existed from
1965 to 1968. Although the band produced only two singles during their time
together, they cut enough material for an album that unfortunately failed to
surface. Thank goodness the shelved tapes were not tossed in the trash, and at
long last here’s the complete audio history of the Troyes.
Released September 1966, the title track of the collection
marked the band’s first single and peaked at the number three spot on the local
charts. Lit by the spunky hum of a pumping Farfisa organ, “Rainbow
Chaser” is further wrapped in a pleasing package of gripping melodies, a
biting guitar solo, and just the right amount of sass and spit to spawn a cool
garage rock vibe, while the flipside of the single, “Why,” captures
the Troyes laying down a shower of smooth and soulful moves. The band’s second
single, “Love Comes, Love Dies” arrived in March 1967 and deftly
nailed detailed psychedelic pop informed figures to an expressively brooding
beat. Tucked on the back of the track was “Help Me Find Myself,”
which jumps, jerks, and jolts to and fro and round and around to a shaking
showcase of dancing organ trills and lively rhythms.
Eager and able to play a mix of musical styles, the Troyes
still seemed partial to hard rocking riffraff. Pronounced by a gut-wrenching
vocal performance and aggressive licks galore, “I Don’t Need You”
spills forth with lethal doses of angst and venom, and then there’s
“Cornflake” that screeches and screams with the kind of acid-related
heaviness linked with acts like Blue Cheer and the Jimi Hendrix Experience. A
noted Electric Prunes influence manifests on the spooky, and oddly but
inventively structured “Tomorrow,” and “The Good Night”
rocks and rattles with naked emotion.
The Troyes had fire in their tummies and raw energy, which
are needless to say, proper accessories needed for being in a rock and roll
band. Drawing their main inspiration from bands such as Them, the Rolling
Stones, the Animals, the Five Americans, and occasionally the paisley-pierced
folk aspects of Donovan, the Troyes conceived a sound that leapfrogged from
scruffy suburban blues to radio-friendly pop rock. Driven and determined, the
band probably would have gained far wider success had promotion been stronger.
Not until now have the Troyes been awarded a retrospective, so what a joy
“Rainbow Chaser” is, which also includes a chunky booklet telling the
tale of the band.
Review made by Beverly Paterson/2014
© Copyright http://psychedelicbaby.blogspot.com/2014
Beverly PatersonReviewsThe Troyes