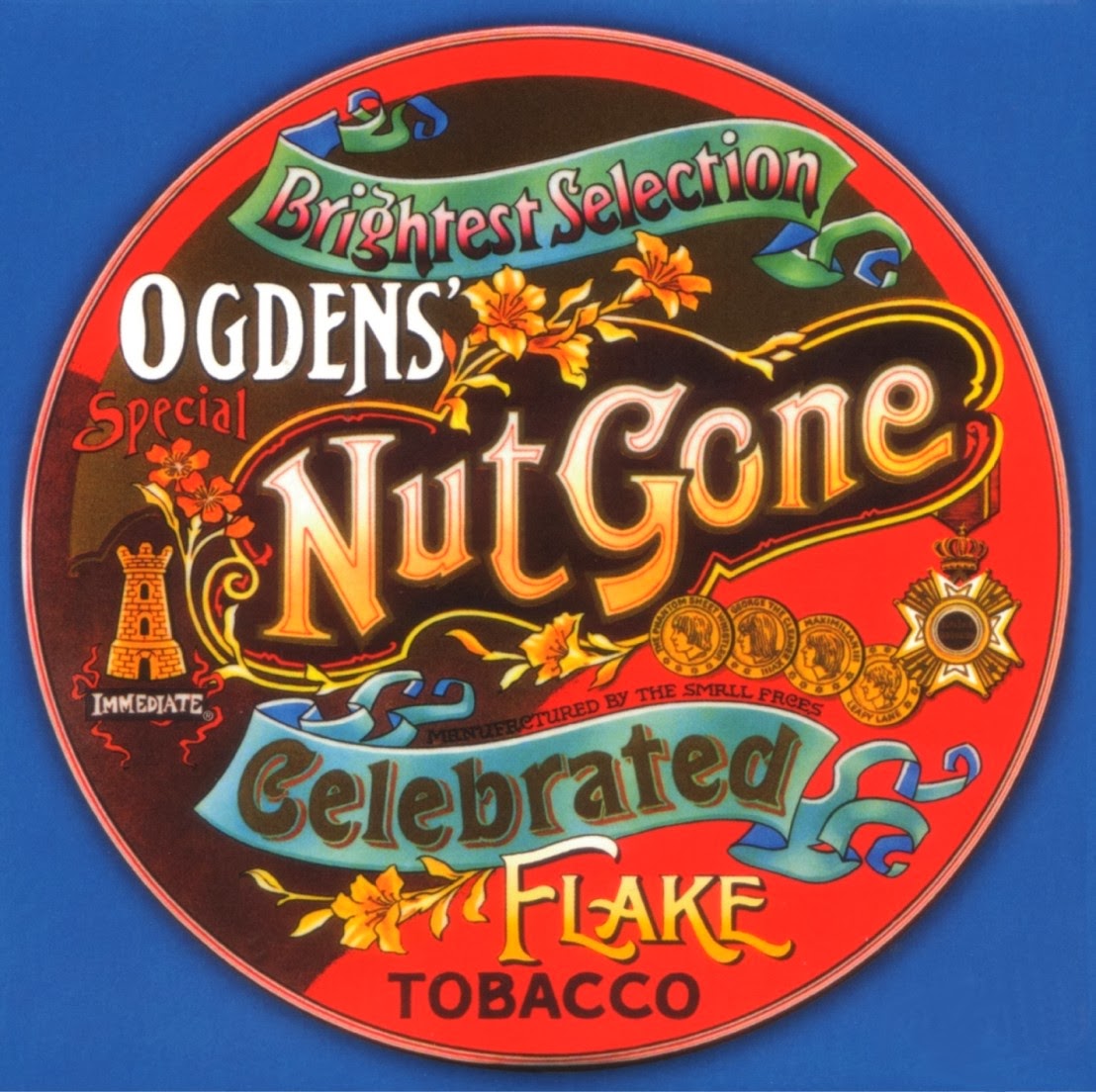 Small Faces “Ogdens’ Nut Gone Flake” (1968) review
An ambitious concept album from one of the greatest of all
british invasion bands…The Small Faces- Ogden’s Nut Gone Flake.
Steve Marriott- Guitars & Vocals
Ronnie Lane- Bass & Vocals
Ian MacLagan- Keyboards & Vocals
Kenny Jones- Drums & Percussion
Stanley Unwin- Cockney Double-speak
The Small Faces will forever be my favorite British mod band
with The Who being a close second. Blasphemy? Well if it weren’t for Roger
Daltry’s “devoid of emotion” vocals and his seemingly disinterested
stage presence, I’d entertain any arguments to the contrary. But I digress,
let’s set the controls for the heart of the sun.
In the hazy, somewhat crazy Summer of Love, 1967, The Small
Faces smoked “dey pot like goods lads” of the day and decided to
record “Ogdens Nut Gone Flake”, a concept album. Largely a departure
from the strengths of most bands, concept records were considered overindulgent
and resulted in a lot bands swan songs. “What’s this? A concept record?
We’ll have none of that!”
You could argue that The Beatles set the bar with “Sgt
Pepper’s Lonely Hearts Club Band” in June of 1967, while the Moody Blues
explored this territory with their November release “Nights in White
Satin.” January of 1968 The Rolling Stones jumped into the foray with
“Their Satanic Majesty’s Request” and in July the Moody’s hit it big
again with “In Search of the Lost Chord”. [“Lost Chord” is
a wonderful musical journey, largely put down these days, celebrating the LSD
trip and Dr. Timothy Leary.] And I would be remiss unless I got on my knees and
chanted “I’m not worthy” in the direction of The Pretty Things’
“S.F. Sorrow”…!!!
The Small Faces put out their masterpiece “Ogden’s Nut
Gone Flake” in June of ’68 and The Pretty Things finished the year with
the closest thing to Sgt Pepper: “S.F.Sorrow”.. brilliant and under
appreciated at the time. The Who and The Kinks put out “Tommy” and
“Arthur” in 1969. Now that we’ve set the record straight….forward,
Tin Soldiers..onto “Ogden’s!!!”
Released in June of
1968, “ONGF” took a year to record and mix. Half a concept LP
drenched and dripping with psychedelic jams and tongue-in-cheek cockney humor.
It was released with its’ die-cut tobacco tin artwork and potent music wrapped
around four stoned, cockney Elves.
Side 1:
“Ogden’s Nut Gone Flake”: The self titled opening
track has Ian MacLagan’s phased organ arc-ing from speaker to speaker pounding
you into submission ..”more you little bastard, MORE!”.
“After Glow” written by Steve Marriott about one
of his girlfriends [some say Pat Arnold] is a wonderful journey loaded with
spatial effects.
“Long Agos and Worlds Apart” written & sung by
MacLagan stands on it’s own and is a perfect segue into-
“Rene”, a paean about a loveable East End
prostitute, Rene Tungate. “Rene” starts off with Lane singing in a
cockney accent and ending with Marriott’s guitar and the Mighty Midget Rhythm
Section of Lane & Jones plowing a path through your brain into….
“Song of a Baker”…I give up! What a great
record! The Mighty Midgets at it again! Some fans consider this the bands best
song. At 2:22 you can hear Lane prompt Marriott with “Jump”, the lead
in to the next line. I love the seemingly unedited looseness that took a year
to create. Incredible! We haven’t even gotten to the concept side!
“Lazy Sunday”, written by Marriott about his
neighbor just to fill out the side, was released and climbed the charts much to
his chagrin.. he never liked the song. “Ere we all are, sitting in a
rainbow..blimey, hallo, Mrs. Jones, how’s yer Bert’s lumbago?” I find it a
revealing and stunning window into Steve Marriott’s former career where he
played the Artfull Dodger in OLIVER at the Noel Coward Theatre in London’s West
End. This was 1960 and led to Marriott working in radio & television…but
as I usually do…I digress.
Side 2:
Narrated impeccably by BBC Radio & Commercials star,
Stanley Unwin, side two starts the magical journey of Happiness Stan, a
electric fairy tale about the cycles of the moon. Casting the double-talking
Unwin was a stroke of genius. Unwinese is hard to decipher but who cares? It’s
hysterical. Having spent spent some time with the lads during the recording,
Stanley wove some of their daily dialogue into his own cockney double-speak.
For all it’s linguistic pretentions, it’s a load of bollocks, but brilliant nonetheless.
“Happiness Stan” starts the tale with Unwin at the
top of his form, “Are you all sitting comfty-bo two-square on your
bodieee? Good then I’ll begin..” [Professor Irwin Corey would be proud]
setting up the harp intro into Marriott’s pop-psych phased vocals.
“Rollin’ Over” with Stan’s intro blows the
Un-Unwin 45 rpm mix away.
“The Hungry Intruder” has the Faces at their
whimsical best.
“The Journey” features Ian MacLagan’s trademark
pumping keyboards.
“Mad John” is prototypical Small Faces of the day.
Marriott’s wonderful acoustic guitar & MacLagan’s piano set the backdrop as
Marriott trades verses with Ronnie “Plunk” Lane’s nasal intoning
morphing into a medieval romp!
“Happy Days Toy Town”….Unwin- “Clap
twiceee, lean on yer back-edo and twistee for awhile-oh’..don’t worry about the
moon. Oh dear joy….cockney, cockney, cockney..remember in your brain bockle,
lad: Wrong starts with a Wubble-U! All joyfold! Goodlee bye-lod-ee!”
A cockney knees up. Indeed!
Review made by Bob Mickey Spillane, The Dangerous R&R
Show/2014
© Copyright http://psychedelicbaby.blogspot.com/2014
Bob Mickey SpillaneReviewsSmall Faces