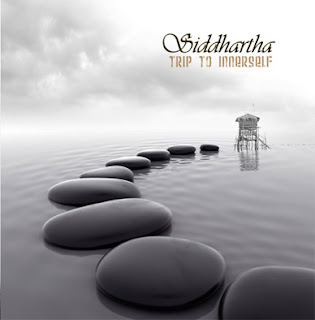 Siddhartha – A Trip to Inner Self (Trail Records, 2009)
Siddhartha have created something special
for us. They’ve forged the true psychedelic pill that Neil Young attempted in
2012, meant in all purports to transpose us from this chaotic world to the
domain of our subconscious mind and whatever enchantment or terror that may lie
within it. It’s a truly bold and bronzy experience—a symphonious expedition
that I felt the need to strap myself in for. It takes a stomach and able mind
to endure an album like this from front to back, there can be no denying that,
but the end result is very rewarding and you’ll wish you’d have taken the ride
a lot sooner. And your first ride will never be your
last. For those unfamiliar, Siddhartha was an
influential book written in 1922, published within America in 1951 and is the
inspiration for many Buddhist philosophizers in reckoning of transcendence and
renunciation (1). It is obvious the artistic intent of this album then; to
transport us from one living world to the next. They achieve that with
musician’s virtuosity and progressive rock’s paint brush; dabbling in many
colors that coat sprawling, mile-long corridors and assembling numerous
soundscapes that are minimalistic and maximal, hushed and deafening with a six
band member base, not to mention the upward towards five on-and-off guest
musicians. The tracks flow seamlessly together in large Rock-orchestral
movements, creating a solid sense of cohesion in the journey with minimal
interruption or time to reflect until the entire trip has slowed to a halt. The
entire experience encourages one to slow down and (forgive the clichéd
expression) smell the roses.
Turkey has, to my surprise, been the source
of a great score of skilled psychedelic groups throughout the years, but none
so coordinated and focused in their intent as what Siddhartha have put on
display here. Their album has been greeted with top honors as the “4th edition
of Prog Awards album of the year in 2009.” A Trip to Inner Self has been
re-issued in a limited collector’s edition as of 2012 (2 ). My advice is to
pick it up while it lasts because nothing this good ever lasts for very long.
1 – Hesse, Hermann. Siddhartha; [New York]:
New Directions, 1951. Print.
2 – “Trip to Innerself [Import].”
Amazon.com: Trip to Innerself: Siddhartha: Music. Amazon, n.d. Web. 07 Mar. 2013.
<http://www.amazon.com/Trip-Innerself-Siddhartha/dp/B003B8TYVE/ref=sr_1_1?ie=UTF8>.
Review made by Hunter Gatherer/2013
© Copyright
http://psychedelicbaby.blogspot.com/2013
Hunter GathererReviewsSiddhartha