Eternal Tapestry is a psychedelic, drone, experimental project going on for a couple of years now releasing quite a lot of albums and they recently recorded a new one. We spoke with Dewey Mahood from the band about their upcoming album A World Out Of Time. It will be released on November 13 on Thrill Jockey.

What is the main driving force behind Eternal Tapestry?

The band has always been about friends getting together and collectively losing ourselves in sonic exploration. Our music is founded on the principal of escaping our individual egos and contributing to something larger then ourselves, creating a massive sound that forms an alternate reality. It’s about escape from the everyday boredom of jobs, consumerism, and meaningless bullshit. I like to think of Eternal Tapestry as a never ending creative process building multi-hued prisms of sound.

The project is running now for a couple of years.

Nick and I have been playing music weekly since 2005, and Jed’s been with us since 2006. In the formative first two years we had a lot of friends come and go, and the music was much more wild and hairy. We have always been a psychedelic band, but in those days we had a foot in the noise scene. Bands like Axolotl and GHQ influenced our methods. The real primary forces behind the band is Pärson Sound and Les Rallizes Dénudés though. Jed was living in Brooklyn at the time and sent Nick recordings of those two bands. Nick and I were hanging out at practice and he said “check out this stuff my brother just sent.” We were never the same! heh heh

These days we have been more influenced by American bands of the late 60’s and early 70’s like Michael Yonkers, The Index, The Weeds, early Grateful Dead, and the Velvet Underground. Our sound has become a bit more traditional over the years, but I feel that is a natural result of playing together for 7 years.

You have a new album coming out. Will there be any major changes as far as the sound goes?

Well, the new one A World Out Of Time features our first acoustic folk tune “Sand Into Rain”. I think it will be a pretty big surprise to anyone who’s been following us. We are big fans of stuff like The Byrds and thought it would be cool to write something touching on that type of vibe. It’s still very much us, just with acoustic guitars and Nick’s singing written lyrics. It was a really cool experiment for us going for a completely new sound. Other then that we tried hard to keep the song lengths down and getting as many ideas recorded as possible. Our inspiration for the album is The Faust Tapes, and we went into the studio thinking in terms of small chunks rather then sprawling free form epics. 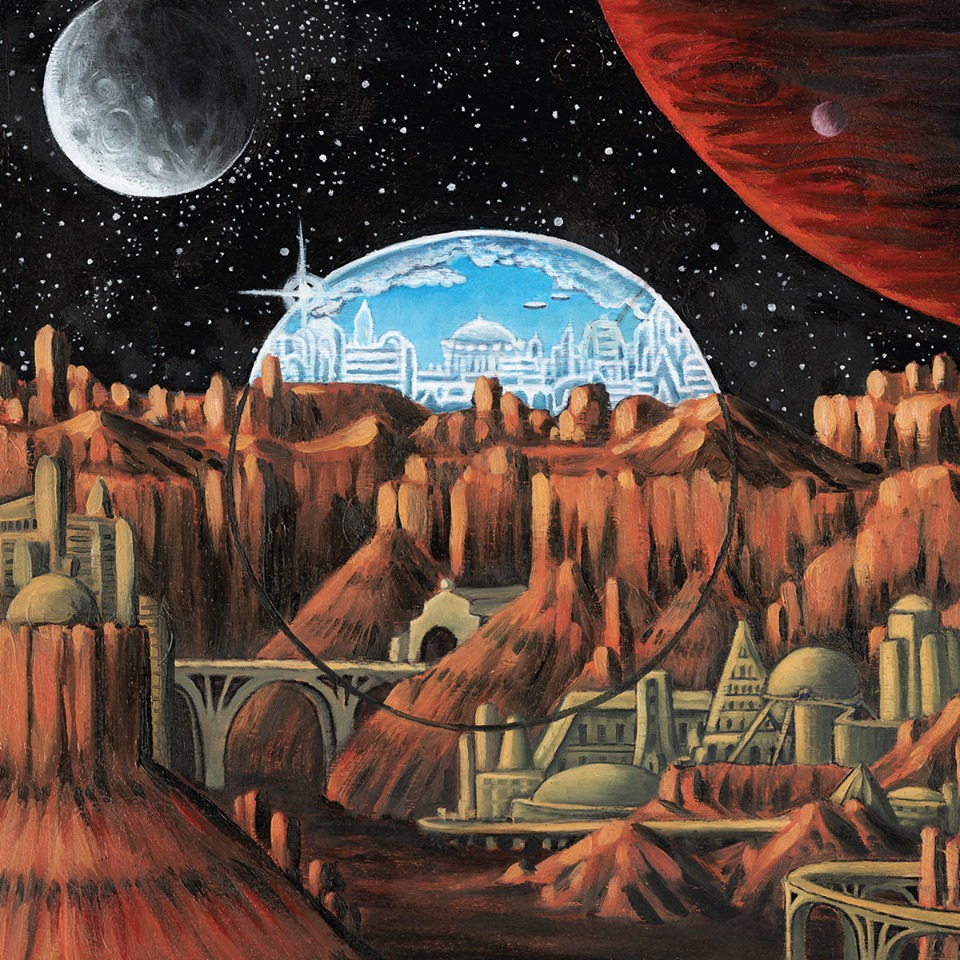 I think I already hit on most of them! heh heh A lot of non musical stuff like Philip K Dick, J.G. Ballard, and Robert Anton Wilson. Writers that tell fantastic tales, and comment on how messed up human civilization is with a sense of humor. Paranoid 1970’s thrillers like The Conversation, The Parallax View, Network. Just about anything by David Cronenberg.

What is the concept behind it?

Well, like most everything we release the central theme is creating an alternate universe. One without corrupt politics, greedy CEOs, genetically modified food, pollution, war. We have this real romantic idealism of simplifying our needs and living a more nature based existence, with loud amps and electronics of course! Our music is based on escape in the intellectual, imaginational sense. The album is designed to work as a single piece of music to immerse the listener in a fantasy world of our creation.

The band is invited to play Roadburn festival in Holland this April so we are working on a tour around this date. We hope to hit countries we missed when in Europe last year focusing on Northern and Eastern Europe, Germany, and Italy.

I just spun the Group Inerane LP on Sublime Frequencies from a couple years ago, Guitars From Agadez Vol. 3. Such amazing and beautiful music played by these guys out in the middle of the desert. Even though we are culturally very removed from them, I feel we are both communicating via the same basic language of ecstatic melodic guitar improvisation and mantrid drones. I’d love for Etap to travel to Africa and jam with some of these dudes!

I’m always in the middle of a few books. I just finished this incredible book called The Man Who Planted Trees about this dude David Milarch who’s collecting specimens from the oldest and largest trees still alive. With little funding this guy is traveling around the world, climbing trees, taking cuttings, and growing new super trees. It’s DIY, roll up yer selves, and do something about climate change and deforestation. Real inspiring stuff.

Thanks for taking your time. I wish you good luck with the upcoming album. Would you like to send a message to our readers?

Be yourself, consider all ideas/opinions but don’t accept anything until you’ve given it plenty of thought, eat plenty of garlic, visit the mountains and ocean, spread joy to the people around you. Thank you.