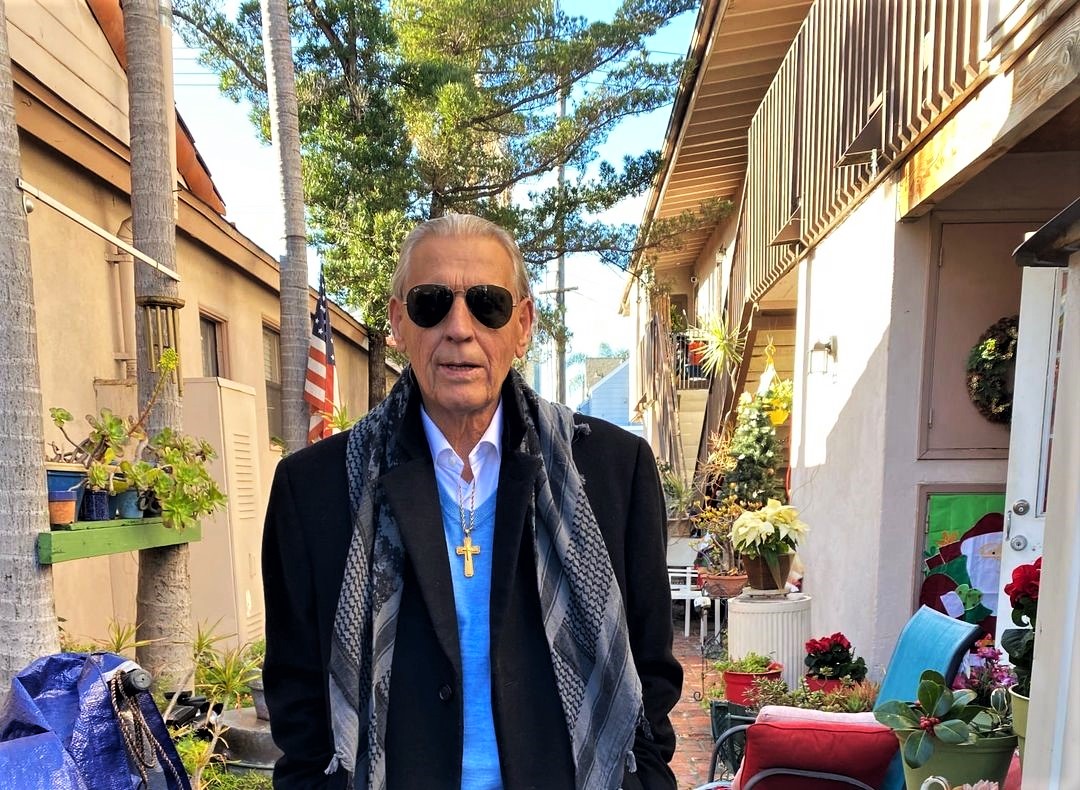 This reporter was sitting around in his kitchen one night when the phone rang, and it was Jim Morrison’s brother-in-law of 22 years, Liverpool, England’s Alan Graham calling.

Al grew up alongside all four Beatles (six, counting Best and Sutcliffe) and still more Quarry Men, going to some of the same Merseyside schools, in and out of the Cavern Club on Matthew Street. Graham’s life is full of notable connections to big names from the last few generations before and after his connection to Jim, who he considers “the greatest poet who ever lived,” but their association was profound and intense, however brief, as evidenced by the multiple tributes Al has produced over the years in his self-made life as an independent talent, including books, operas, songs, and now this. “I’m starting a chain of portable whiskey bars in just a few weeks, a moveable feast like Jim always wanted,” he said excitedly, as well anyone might, delivering news of this caliber. “and I’m gonna bring one to Denver, so get ready!” 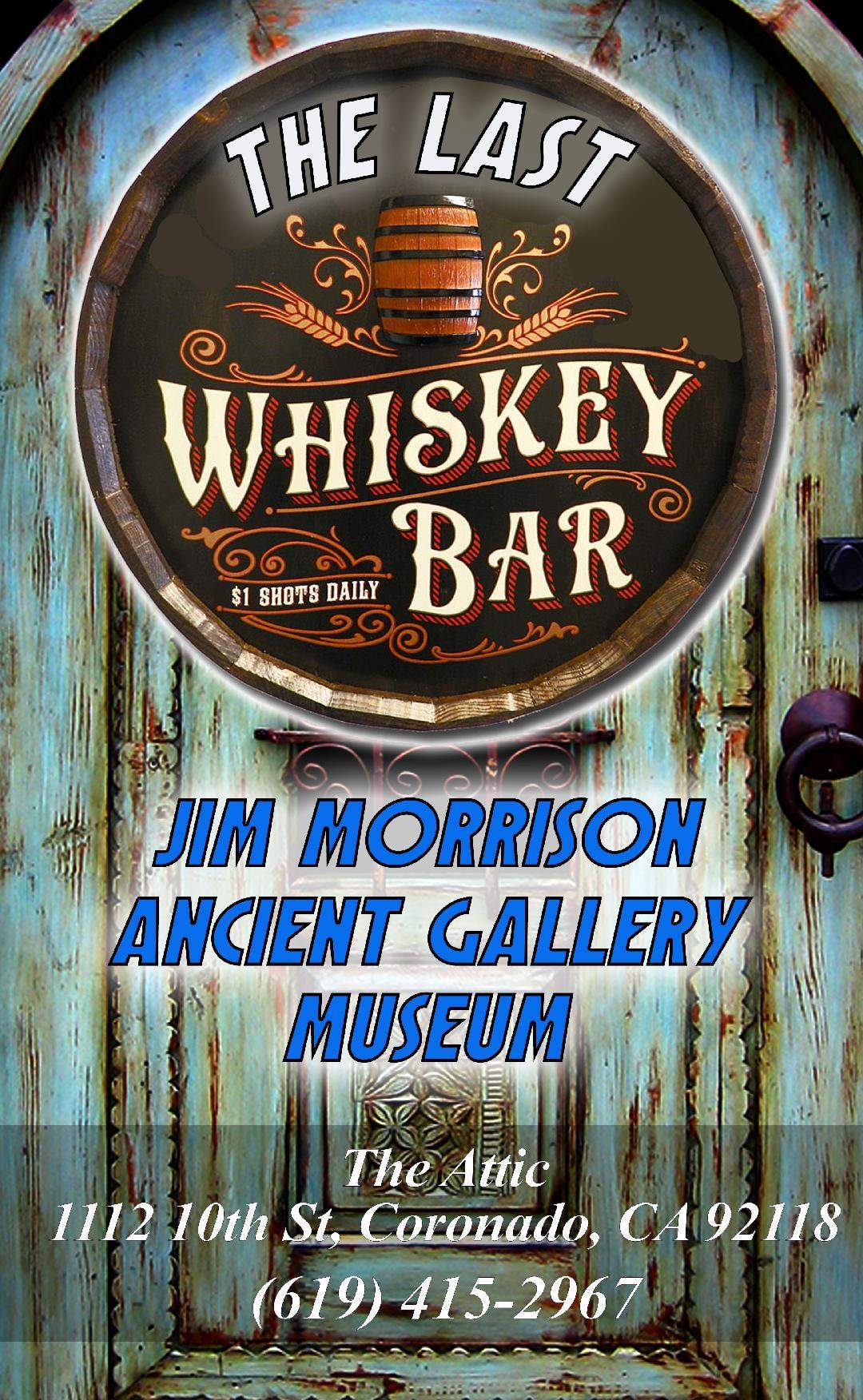 I wasn’t used to good news out of nowhere like this. “What? Tell me more.”

My bizarro karmic apprenticeship to this venerable, sometimes cantankerous personage has been going on for several years. The mental gymnastics performed when he requires my attention and trusted assistance in conveyance of the details of his life (two books edited so far) might be considered a more complete work of art than any of the writing I’ve ever done in notebooks or on computers, and now maybe it was about to pay off. The first Last Whiskey Bar, footage from which is featured in the embedded video, has just opened in the island-city of Coronado off the coast of San Diego, in a space called the Attic. “When I go into a place, it’s not like I take it over or transform it,” says Al. “I walk into a place, take a look at it, talk to the owners and find out what’s their special thing they need, and add that in.”

In one video presented with this article, Graham gives us a tour of the first location at the end of a long day, with the streets of Coronado Isle gone quiet outside, affording his audience a video tour of the Attic in the Coronado Visitors Center housing the last remains of James Douglas Morrison’s poetic whimsy for the world touching on some biographical data from his colorful history— an on-and-off minister most of his life, for years he’s been donating fresh fruit to neighborhoods in Los Angeles and San Diego, and now that he’s almost reached 80, Al is making ministering a full-time career. The camera pans around of the room full of curios as he walks across the checkered floor where the Last Whiskey Bar is making its first appearance as a newborn happening, even lapsing into a bit of Scottish song at the end to show you his liver as the camera zooms in on the sign reading, “THE LAST WHISKEY BAR $1 Dollar Shots Daily. Final Resting Place of Jim Morrison.”

Graham met his future bride, Anne Morrison, or “Anna” as he calls her, in Earl’s Court, London, in the late-middle-1960s, in the hotbed of U.S.-English cross-pollination resulting from the Beatles’ breakthrough. “[The American students] were celebrating us, but in a nice way, we were celebrating them,” says Graham on one video, somewhere in his seventies now and commanding a team of assistants placed in top cities all over the world from his headquarters on an island off the coast of San Diego. I’m Al’s agent in Denver, organizing a series of happenings in promotion of the latest upgraded re-release of his three classics, two volumes of underground history, ‘Before The Beatles Were Famous’, ‘I Remember Jim Morrison Too’, and a collection of verse called ‘Poet Rain’ partly inspired by the Beats.

After Anna’s brother Jim had a fight with his Naval admiral father over his refusal to go to Vietnam, the nascent rock icon swore off contact with his family, living on the rooftops of apartments and commanding gangs of pickpockets, among other mostly-unknown adventures, losing a lot of weight and ultimately starting a rock and roll band with Ray Manzarek, who he knew from UCLA. Graham returned with Anna to her hometown of Los Angeles, California, just in time for the release of the Doors’ self-titled first LP in 1967, featuring a headshot of her missing brother Jim on the cover with three other band members inside it, walking in to find Anna in tears listening to this album.

Al was one of the Lizard King’s most frequent companions during the wildest days and nights of Doors stardom, witnessing Jim’s alcoholic excesses and correctly diagnosing them as a hereditary disorder, equipped as no other biographer with insider family perspective. You’ve never heard of him because he was part of Jim’s family, “which might make you think twice about trusting Danny Sugerman or any of the other billion chroniclers of his six years of fame.” Besides unprecedented intimacy with the close-knit Morrison family’s history and character (did you know Jim was a direct lineal descendant of Braveheart William Wallace?), Graham knocked shoulders with all the other notable Liverpudlians (not just the Beatles) before meeting Anna in London and taking his adventures stateside. And well varied the legends thereof, some ongoing from ever since, involving multiple outlaws and/or free speech champions like Larry Flynt when he ran for president, and be assured the watchword now is positive.

Al’s intimate connection to the Morrisons, a secretive military family with a code of non-disclosure, make him one overlooked insider to an important part of U.S. cultural history. And he’s still causing trouble for squares as an old gent. For the last few months, he’s been hosting a podcast called The Crystal Ship from his underground stronghold off the coast of San Diego over a wavelength broadcasting from the heart of Lotus Land. There’s also talk of an episode from Paris in short time—where Graham’s book on Morrison was recently published in French by Lamiroy Editions—to be shot at Morrison’s gravesite in Pere la Chaise cemetery alongside the graves of Rossini, Gertrude Stein, and other cultural stalwarts. The time seemed ripe for a gang of whiskey bars to pop up to complete the latest series of impromptu cultural happenings by Big Al.

When he answers the phone, he is usually in the middle of a conversation, sometimes putting me on speaker phone. I haven’t seen any depression. “Alexander the Great . . . Genghis Khan . . . Larry Flynt . . . any man who ever did anything . . . they were manic! They all knew something that nobody else did. They were ready to fail! Lee Iacocca was once visited by a billionaire sheikh from Iran, and you know what he told him?”

“What?”
“’Come back when you’ve had your first bankruptcy.’ You get that, lad?”
“He was ready to fail?”
“He was ready to fail because he knew something nobody else knew. He knew it was about the journey more than the destination. Flynt was the same way—always ready to dangle that check, and throw it away.”
“Well, I hope you don’t fail.”
“Zack . . . are you kidding? I never fail.”
“You’ve got a great track record.”

“Because I’m always ready!” Graham laughs. “KPXI is the only nuclear-powered radio station on God’s Green Earth,” he continues, giving me the call-letters of his network, “in fulfillment of the lineage of the antediluvian ancestors, and the lineage of the Knights Templar ancestors, in protest of the insolence of officials in this society thrown wildly out of balance where the rich corporations never give a shit about the little guy like you and me—here am I, Knight Alan Graham, in honor of the legacy of his brother-in-arms, James Douglas Morrison, poet first and iconic songwriter and vocalist for sixties rock and roll supergroup The Doors, announcing an impending series of pop-up whiskey bars, here on The Crystal Ship podcast on KPXI, to be called The Last Whiskey Bar, one or more coming soon to a city or cities near you, currently making its first appearance at the Attic at Coronado Visitors Center in in Coronado, CA, then appearing at subsequent locations in San Diego, Los Angeles, and Denver.”

“Things went sideways, then they went the other way for a few weeks,” says Graham. “It may seem quiet now, but we’re bringin’ it back on with a bang now.” Fans of the future should keep their eyes and minds open for a staging of the Last Whiskey Bar popping up in a city near you and yours any time now. English-speaking fans of the sixties and underground history can get Al’s books here.

“Readers of this article are privileged to have made contact prior to liftoff: Graham has just opened another Whiskey Bar at the Millennium Biltmore Hotel in downtown Los Angeles to correspond with the publication of his I Remember Jim Morrison Too in English, French and Spanish.”