‘Be The Consequence’ by Extermination Day | Album Premiere 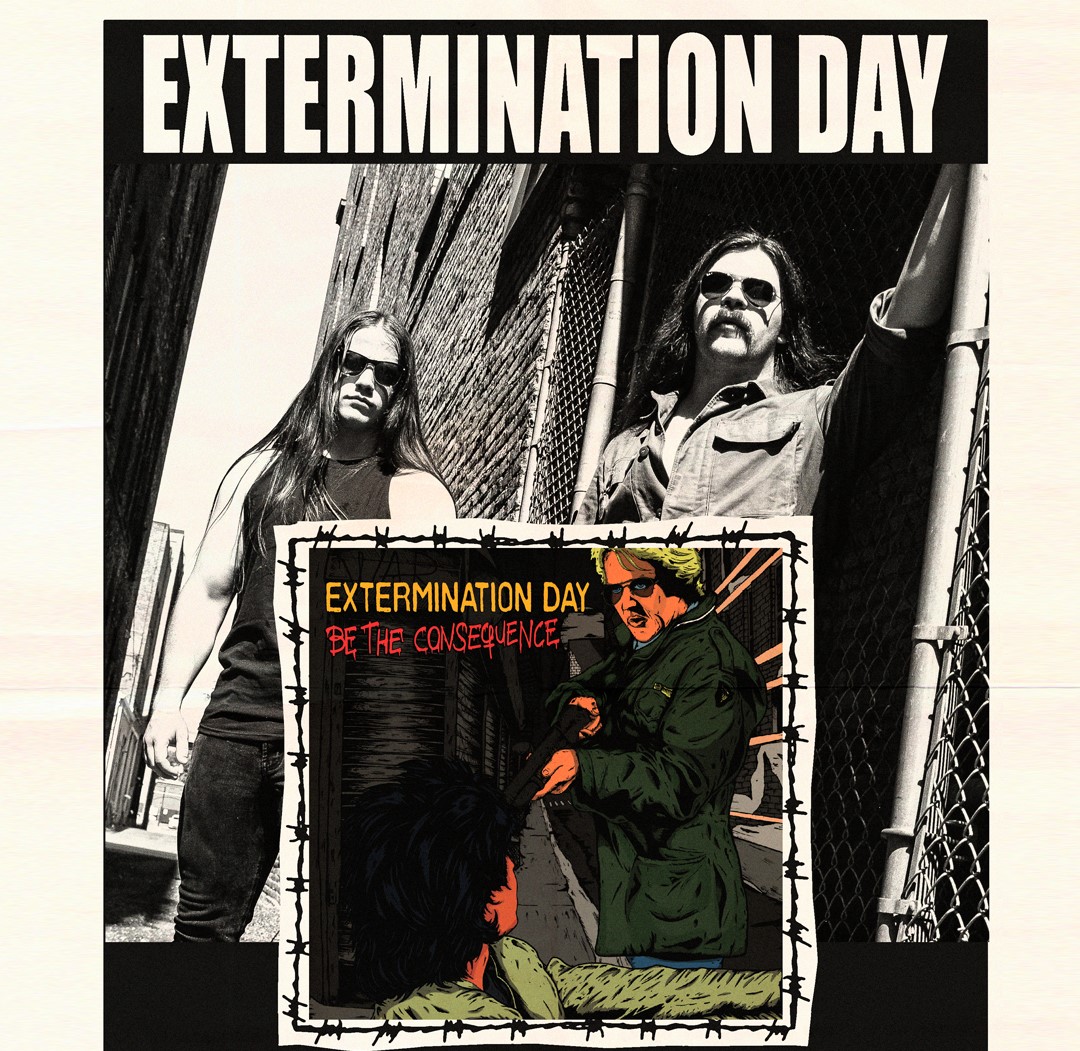 ‘Be The Consequence’ by Extermination Day | Album Premiere

Exclusive album premiere of ‘Be The Consequence’ by Extermination Day, out August 5, 2022 via Hoove Child Records and Green Coyote Records.

‘Be the Consequence’ is a a punky, fast-paced, and urgent album, perhaps best described as what Trouble might have sounded like if they hung out at CBGB’s in the late ’70s. This album will be out August 5th on CD via Hoove Child Records and cassette via Green Coyote Records.

“If I had to describe this album in one word, I’d say ‘angry’,” says guitarist/vocalist/bassist Nate Towle. “I was writing a lot of this album during the 2020 riots in Minneapolis, a lot of which I witnessed firsthand. I saw buildings set ablaze and unhinged police officers pepper-spraying and attacking folks that weren’t breaking any laws. Between that and a general sense of unease, be it from the pandemic or the volatile national political situation, there wasn’t a whole lot to be happy about. We were and still are appalled by the state of the world, and it shows in our music”.

Extermination Day was formed in early 2020 by Towle. Inspired by the film The Exterminator, he singlehandedly recorded a demo tape before enlisting drummer Jason Oberuc (currently of Suffering Hour) into the new project; the two would go on to record a self-released EP called If Ingested, Consult a Mortician later that year. A newly-found appreciation for early punk rock coalesced with the band’s pre-established interests in doom metal, the NWOBHM, and ’60s/’70s hard rock, further pushing the duo into developing their unique rough-and-tumble style.

Towle and Oberuc frequently jammed together and fleshed out song ideas before entering Black Dust Studios in September of 2021 to record what became Be the Consequence. Under the supervision of engineer and co-producer Dylan Haseltine, they recorded with the intention of capturing a live and raw sound, cranking amplifiers to full volume and bashing drums beyond recognition, with Towle barking every syllable of the songs’ lyrics with intense force. The result is an honest, uncompromising album, which is bolstered by its low-fidelity production style and unkempt attitude.

The title track ‘Be the Consequence’ serves as a call to action, its unbridled energy setting the tone for the album. ‘The Exterminator’ directly references film character John Eastland: a Vietnam war veteran-turned-vigilante who becomes the enemy of criminals and police alike. Nuclear war fears, once a relic of the cold war, are reexamined in ‘F-89 Scorpion’, which tells the tale of a pilot forced to fire the world-ending weapon. Other tracks like ‘Ghetto Ghouls’ and ‘Kill (Like a Motherfucker)’ provide matter-of-fact observations about urban life, the latter featuring a saxophone solo by Bruce Lamont. ‘Crackin’ Skulls’ is a critique of far-right agitators being comfortable enough to express their views in public.

“I had a lot to get off my chest, and this album serves that purpose”, says Towle. “Musically, it’s a logical progression of my artistic style. It’s the perfect amalgamation of my previous experiences with my past projects [Satan’s Satyrs, Wicked Inquisition]. Collectively, this is our statement on a world gone mad – our weapon against the man”. 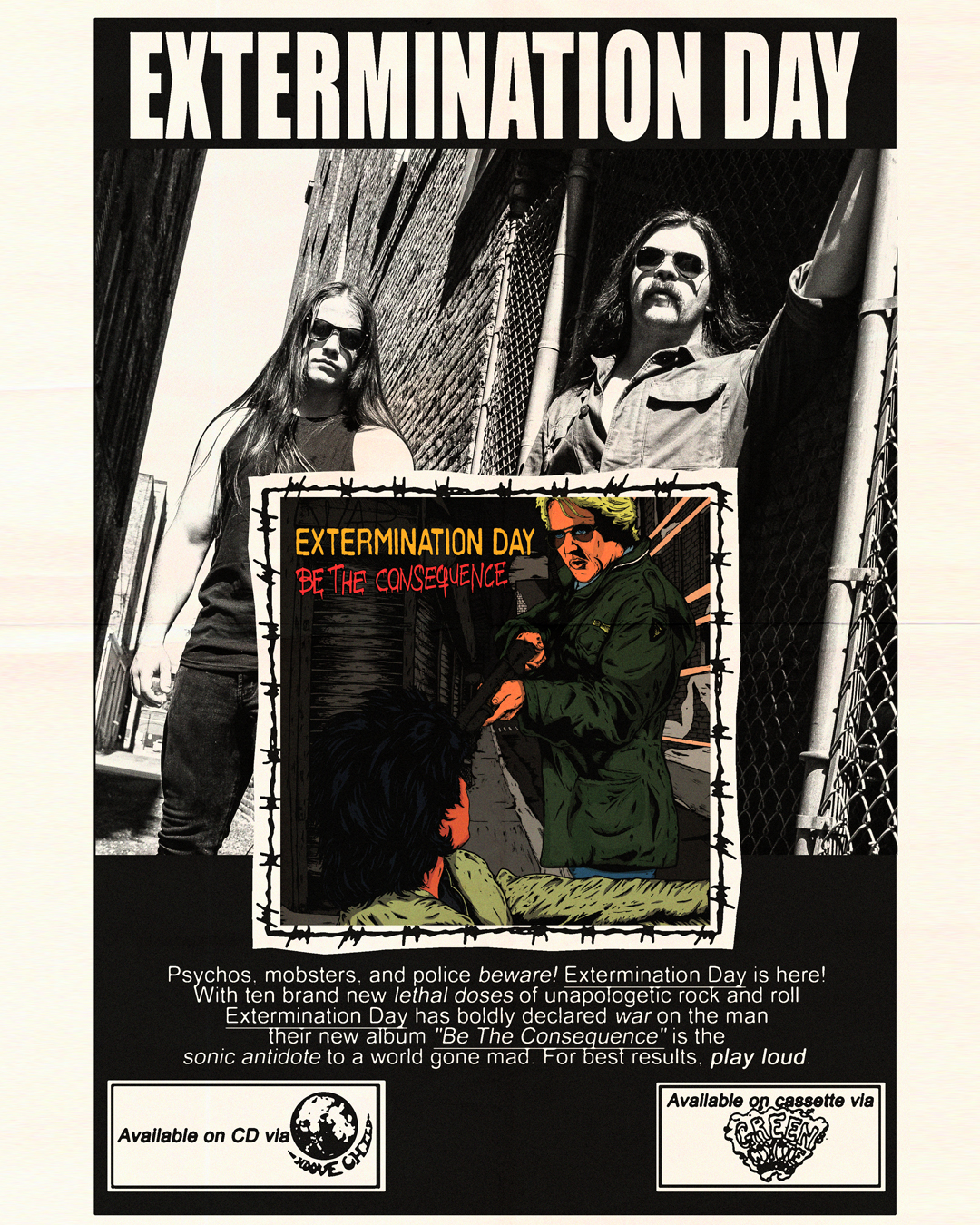 Be the Consequence is very much a modern album; its lyrical themes and intensity are more relevant than ever. The ten tracks stand together as a collective statement which defy trends in favor of honesty and integrity. It forces listeners to open their eyes and see the true destructive nature of humanity, and pulls no punches in doing so.