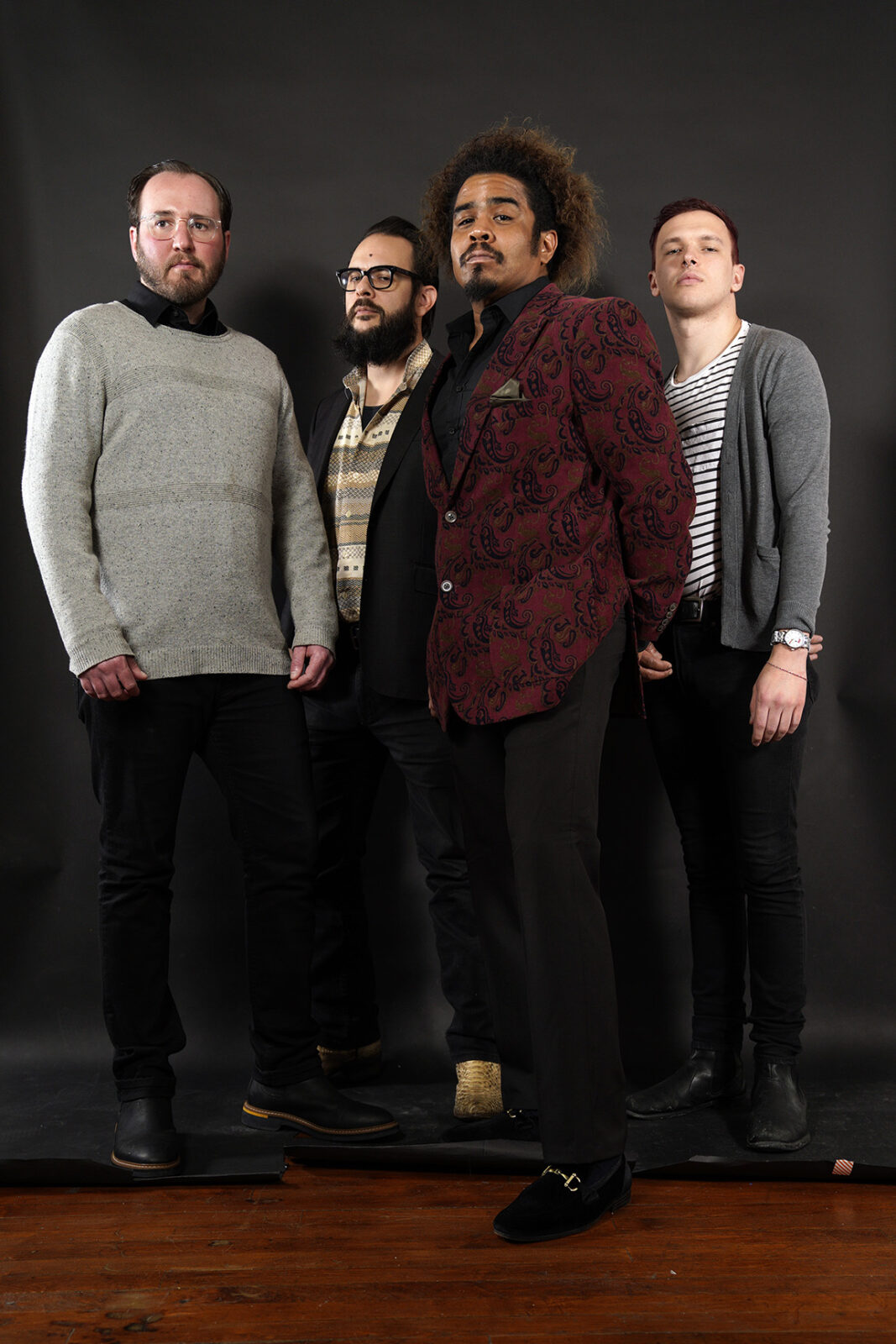 Kansas City’s electro future rock quartet, Various Blonde is releasing a new music video for their single, ‘Too Many Secrets’.

Various Blonde’s current lineup is Josh Allen (guitar/ lead vocals/synth), Mark Lomas (drums, keys), Jason Nash (bass), and Bryson Thomas (guitar, vocals). The video, directed by Inti Pérez Peña, is shot in black and white. It pairs the industrial groove of the song with a heavy story. “Adam is a young priest [played by Daniel Espinoza] who lives in a small town. He has the divine task of listening to the confessions of the people and keeping them secret. He can hear but never tells. Adam tries to act normal when recognizing the faces of people who have confessed their sins to him, but one day Adam can’t take it anymore.”

The priest is overwhelmed by the “whisperers” in the video (played by Beth Cast, Fernando Díaz, Isabel Jimenez, Manuel Rodarte, and Margarita Molina) as they get super close to his face confessing their /secrets/ creeping in my head/ flashing green and red/ it’s the ride before the fall/.

These secrets reach a tipping point in the video as the priest begins to spiral. Josh Allen sings and now I’m sinking, drinking, overthinking/ about the way that it could be/. Our priest finds himself in a bar drinking and smoking, then he’s out on the street as confused onlookers walk by in the background.

The instrumental parts in ‘Too Many Secrets’ are carried by Jason Nash’s distorted basslines and accented with tastefully melodic guitar leads. Allen’s vocals are smooth and sultry as he croons what feels like a forbidden love song – especially when you’re watching an admittedly sexy priest go through some shit. The song builds to a finish as dawn approaches. The young priest, having stayed out all night, finds a kind of peace in solitude and smiles as the church spires rise in the background.

What was the songwriting process like for ‘Too Many Secrets’?

The music came before the lyrics this time. We created a structure for a groove we like and then started doing a little trial and error with synth and guitar tones. The vocals just kinda fell into place after that.

Gear talk: There are some great tones in this track. What’s everyone’s favorite instrument or piece of gear that they just can’t walk by without picking up and playing.

Bassist – Jason Nash is a huge fan of his Ernie Ball Stingray. The active electronics make the fuzzy bass tones we use really pop!

Drummer – Mark Lomas prefers his laptop. The ability to write, play, and record music on it makes it his most versatile piece of gear.

Vocalist/Guitarist/Synth noodler – Josh Allen is a huge fan of his line 6 hx stomp multi fx pedal. It’s super versatile and has a broad range of functionality. From amp modelers, to synth, bass, and guitar effects it quickly became a go to for crafting new tones and sounds.

Guitarist – Bryson Thomas chose his laptop as well. His MacBook is his only piece of gear that’s never crapped out on him or given him problems. Other items in his arsenal have had to be replaced but his MacBook has stood the test of time.

How did the story for the music video come about?

We’re on a small label out of Mexico City called Discos Amatista. They linked us with Inti Pérez Peña who wrote the treatment and directed the video. They took the “too many secrets” aspect of a relationship and applied it to the relationship priests have with their congregation.

Why is the priest smiling at the end?

I believe it’s because he’s not sorry for what he did.