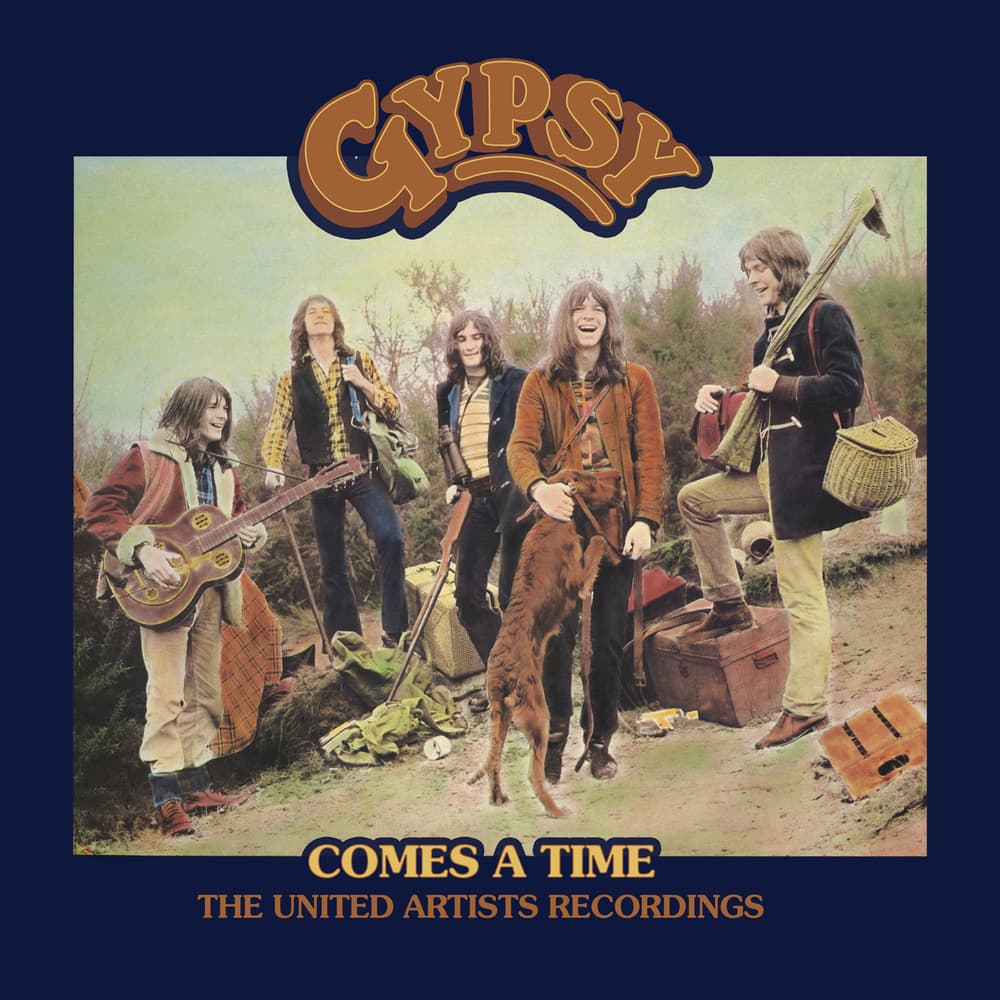 When we look back into modern music’s history, it’s made more difficult (not just clouded) unfortunately because of some fad called the internet, a tool which assumes it knows more than the user. Lucky it’s not a drill or combine harvester then. In this case, when some (usually) American group copies an already-used name, then the hair-pulling fun and games begin. Our tale starts in the 1960s (a century ago?!) perhaps by those already dreaming of a brain-shredding tool to better muddy future waters. Fortunately, Cherry Red has just released ‘Gypsy: Comes A Time’ as a double CD with the band to help clear some of the (cob) webs.

Our subject is the original Gypsy, or “English Gypsy” stateside for obvious reasons. They developed from a band called Legay (1965-March 1969) in the Midlands city of Leicester, not Legacy as some websites and their foolish unchecked spellcheck wrongly say. Named after their first drummer Legay Rogers, who left due to illness, replaced by the celebrated Rob Townsend (of fellow-Leicester band Family in ’67 then Medicine Head), then by 15 year-old David ‘Moth’ Smith, they had one single on Fontana in ’68 that’s on psych compilations, a new style replacing their Tamla repertoire.

John Knapp (guitar, keyboards, vocals), Robin Pizer (guitar, vocals), Rod Read (guitar, vocals) Dave McCarthy (bass, vocals) and ‘Moth’ Smith (drums, percussion) changed their name to Gypsy Moth (again the drummer’s nickname) which was shortened to Gypsy when their new manager/co-producer Peter Swales left working for the Rolling Stones. Unusually, all of them except the drummer wrote songs—individually but not as a unit—while influenced by American West Coast bands such as Buffalo Springfield, CSNY, Moby Grape and, say the band, H.P. Lovecraft, especially in the harmonies.

Their repertoire was always bigger than just an album though, live and on BBC sessions (10 for John Peel and Bob Harris 1971-73) apart from the debut-promoting In Concert at London’s Paris Theatre which survives on u-know-where. Top gigs included with Led Zeppelin at London’s Klooks Kleek Club in April ’69, then the Isle of Wight Festival during that summer’s August bank holiday. Liked so much, they were invited to play next day on the Sunday, headlined by Bob Dylan whose Nobel for literature proves they don’t know what that word means and contrary to its founder’s intentions. Gypsy were the only act ever to play twice on the same weekend of that famous festival. They also supported Family and Taste at the high-profile Camden Rock Festival (1970) and the Who.

During the first half of 1971 they entered the studio signed to United Artists, label for such as Canned Heat and Can. The fact that some of the roster gigged often and especially at counterculture events (Man, Groundhogs, Hawkwind, Help Yourself, Brinsley Schwarz) meant exposure was never in short supply. Gypsy recorded 90% of the debut LP at the famous Olympic studio in Barnes, once a cinema then at the cutting edge of recording technology from ’66. Hendrix, Stones and Zeppelin recorded most of their period output there. The finishing touches were at Island Studios. But they didn’t use a producer, the songs had been performed live for a while before. The rather thin booklet notes of the new CDs omit mentioning two singles of album tracks and Let Me Take You Home on the label’s double compilation All Good Clean Fun that year.

In John Knapp’s view here, the eponymous May 1971 LP was too relaxed and unlike their energetic live shows which were much heavier in sound. Ten tracks open with a restrained boogie backed by organ, not a typical opening but the rest more than takes up the slack. Airy, dreamy guitars with harmonies are a bit CSNY-like but also a distant nod to their Motown roots. A melancholy acoustic strum adds to some keening ballads by all the songwriters (Knapp’s Please Don’t Stay has some great—Gibson?—fretwork), upbeated to a chunky-chorded romp with fine drumming about a gypsy lady (Let Me Take You Home).

Standing Alone Feel So Bad is perhaps nearest to their live sound, rocking with a dreamy middle break. Pony Ride’s wig-out with a shade of Man’s Spunk Rock is a fun closer, yet the eight-minute Turning Wheel is worth the entrance fee alone. It trips like early Neil Young or Juicy Lucy with riveting twisting guitar including pedal work. John Peel called it the best debut he had ever heard, though he said that rather regularly. The bonus tracks are the non-album single Changes Coming / Don’t Cry On Me released in August, an energetically rocking A-side with a Brinsley-style B-side, though the album’s country stomp Feel About The Country Fine might have fitted. Knapp’s 12-string here was added at Island.

That same month the band flew back from Germany to appear on Top Of The Pops. Incredibly, Pizer’s song was then banned by the BBC for being too “political”! He says today it was a loose commentary on current events during those years of global demonstrations. Although a close-knit band (and less than open to press interest), they felt that Rod Read and their style needed changing, which was amicably done when Ray Martinez (ex-Spring also from Leicester) joined, though an outside professional muso who saw it as a job.

In the early summer of 1972, United Artists contacted to say the next album would be produced by John Anthony (Lindisfarne, Genesis, VDGG etc.), who chose Rockfield Studios in South Wales for the recording with Trident used for mixing. He thought them great musicians open to new, experimental ideas, hence the occasional addition of horns and strings. The title, Brenda & The Rattlesnake was again the drummer’s (and used as a later band’s name!), about a metaphorical stripper although they refute the concept album notion. Another ten tracks, this time only one by the bassist (the atmospheric rocking closer Comes A Time, the LP’s longest track, with boogie wah-wah) was released in late 1972 and forms the second CD of this definitive edition.

The album opener Brand New Car (backed with You Know Better Than Me, followed by Let’s Roll / Without You, were lifted during the year as singles without success. In the same style of the A-side on the LP is Shame, and the B-side is Without You, another West Coast ballad by Knapp with uncredited pedal steel guitar. The fuzzed-up opener might reflect the label paying more attention to the product, for like Let’s Roll’s honkytonk piano and sax there are almost glam rock elements. Midnight Fighter is American AOR, a bit Southern rock a la the Allmans, but this might be the producer’s influence (meddling) as happened to so many in ’72 and soon after such as Stray, Juicy Lucy, UFO, Cactus. There are horns and strings on the quirky Stackridge-like Change Your Mind, while Pizer’s acoustic guitar-backed Universe might point to a new direction with Martinez. There’s less guitar interplay than on the debut but a maturer, fuller sound.

The late Malcolm Dome’s liner notes abruptly end with this album, though it’s good to see the band’s input. Some net-digging (e.g. the excellent Afterword: Musings on the byways of popular culture: And that was Gypsy 30 years later) reveals that a third LP also with Anthony was recorded at Trident (self-titled Orange Album due to the studio’s acetate cover), but as a result of the surprising lack of sales and changing direction, Gypsy was dropped by the label. It has deteriorated from playing over the years, alas, and a cassette owned by a non-band member isn’t being relinquished.

Gypsy continued to gig but their fees went to pay back tax in spite of earning nothing from the albums. In 1974 they appeared in a film by Tony Richardson (Dead Cert) performing Knapp’s Brand New Car. Martinez was fired but he had session-hits with Robert Plant (Big Log) and Cliff Richard (The Only Way Out 1982) before joining other locals Showaddywaddy on lead guitar from 1985-95. A bit later Pizer left the by-then quartet, briefly joining Nutz, and the band folded. They formed Bad Habits in 1984, a socially aware rocking punk band who did several LPs. They interchanged both monikers thereafter (Fortune Teller as Gypsy in 1995). ‘Moth’ and Knapp later gigged with Flicks (Go For The Effect 1979 Ariola) and Diesel Park West, first known as Psychedelic Filberts, a popular local band who were performing into this century.

Hux Records issued a compilation in 2004 called The Romany Collection, which was the first album, single, and six unreleased songs from the Rockfield sessions. This was copied by AMR Archive in Japan eight years later; neither outshine the flapped digipack crisply remastered here. Knapp says he always felt the West Coast angle wasn’t viable and should have stayed more English in style. After all, at the time of their debut they had an average age of only 20. They sometimes also recall Patto, Daddy Longlegs, Juicy Lucy or Skin Alley, some reviewers say early Nazareth, Argent or Thin Lizzy, but only as distant echoes. For sure the west coast tag’s misleading and blocks rewarding interest as the shared vocals offset by blistering guitars colour a vivid soundscape.

Incredibly, across all their output there are no covers either on albums, singles or radio sessions. It might be regretted there are none of the latter here—being fine improvised jammers and heavier outside the studio—but it’s still an excellent overview of a band that was much enjoyed at the time; the editor of CITA still recalls 50 years later their excellent guitar duels at Isle of Wight as do I at the Greyhound. Hailed in reviews back then as a breakthrough band, their ability should have enjoyed a better career, if only sales had matched the audience responses across Europe, where they enjoyed extensive radio play similar to the BBC and praise by such as John Peel and Bob Harris. This enjoyable collection shows why.