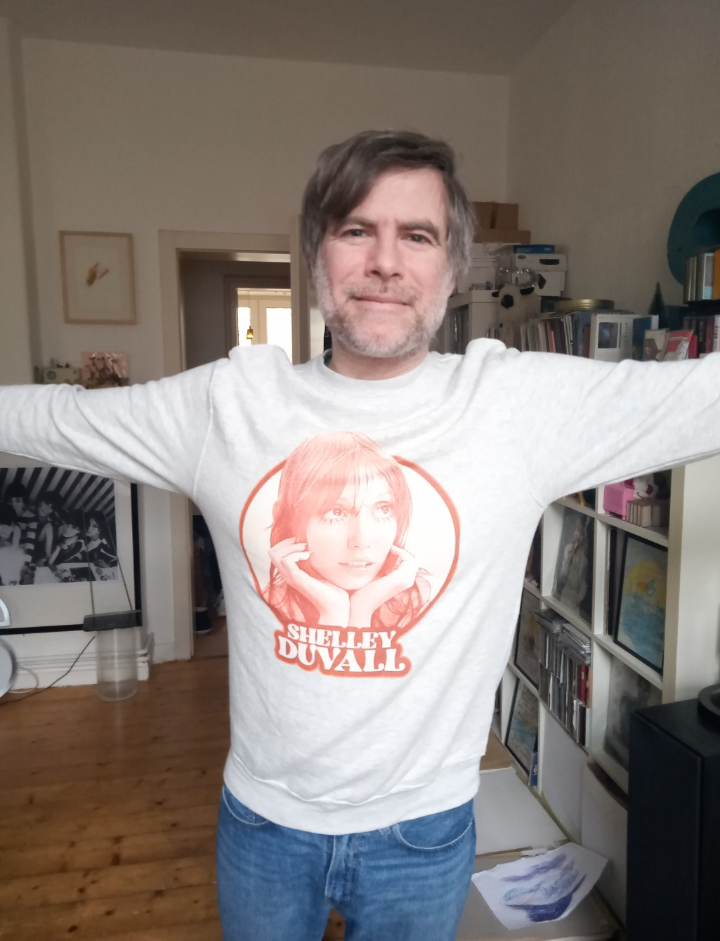 My favorite concert of this year was Sigtryggur Berg Sigmarsson, his performance from last summer at De Nor in Antwerp. The 44 year old Icelandic musician and visual artist undressed, ate an apple, told a US touring story and repeated the line “I am not an entertainer”.

How do you remember the concert in Antwerp at De Nor yourself?

Sigtryggur Berg Sigmarsson: That was such a great festival Dennis put on. Such a nice Ultra Eczema birthday party. Sadly, I could only stay that one day. But I loved being there and seeing friends again. Great vibes.

Just before going on stage to do a performance I usually try to take that energy and feeling I’m having and amplify it, so if I’m feeling nervous for example then I will take that nervous feeling and use it for the performance. Also often I will just black out and things will take turns on their own, like turning on an automatic pilot switch in my mind or something.

So sometimes when I see a video clip from a performance I feel like I’m watching somebody else performing.

I call it “a concert”, but do you see what you do on stage as “playing a concert”? Or more as “a performance”?

I get what you are saying. Of course I probably can’t fully escape the “concert” element since I’m so used to working with sound and have years of experience with doing live gigs, but at some point, say, maybe 15 years ago (or even more) I started putting performative things into my live gigs, until it got more and more into being pure performances and with me showing up without a laptop or any other gear. Just showing up and performing. I like to perform like that, just using my voice and body.

And I prefer to have my performances short. I like that a performance is over just before people start asking themselves “What the hell am I watching?”

What was this performance about for you?

That particular performance at De Nor I wanted to make a little “best of…” for Dennis for his UE birthday. So in a way it was a mixture of three different performances that I’ve been working on. But I do a lot of improvisations within these structures I’ve built throughout the years. So I try to keep it that way that every performance is different. Sometimes more or less. But at least it’s a bit different. Always putting in some small new details and things like that.

I remember the line you repeated was: “I am not an entertainer”.

I am not an entertainer. That’s a sentence I heard a friend of mine say to an art curator who was putting together a group exhibition and the curator found that his work would not fit in the group show as he thought it was too “heavy”. So my friend’s reply was: “I’m not in the entertainment business”. So I borrowed it for my performances since I thought it just fits right in there.

People often laugh during my performances, understandably, so I thought it would be nice to scream that towards the end as a good ending of a performance.

You arrived at De Nor in a training suit and then changed clothes on stage. Changing clothes is normally something you do before you get on stage, not while you are already on stage.

I’ve always thought that nudity in a performance is the most banal thing to do. You know, during a performance when somebody gets naked, you know that feeling ha ha. It’s just really banal. So banal that I liked the idea of starting to start using it for my performances. And I have done so in the past. Not anymore but I just had to do it as I thought it is the worst idea one can do in a performance. For me, it’s really the worst idea to get naked.

I mean, you can experience a performance where somebody is sitting on a pillow or a chain and quietly eating an apple. And there are tons of performances in that style. Ok, so I think those two things in performance art are totally banal things. So I thought, why not combine these two things. Just imagine seeing somebody sitting in a chair and quietly eating an apple and then get naked. Just throwing all the banal things together and trying to get away with it. To me that sounds great!

I remember an art curator in Holland asking me to show him some of my art books, I have done quite a few, and in some of them I have put together photo documentations from various performances of mine throughout the years. He looked at two photos of me in one of the books which showed me naked during a performance in Leipzig and he looked at me and asked kinda annoyed “Was it really necessary to get naked?”. And my reply was: “That’s exactly why I did it. To get that reaction.”

You were dressed in an Ozzy Osbourne T-shirt. Are you an Ozzy fan?

Should one be well dressed on stage, to show that you take it seriously, as a form of respect towards the audience? Is dressing up before you get on stage a way of saying: “And now it’s showtime!”?

No idea. But I do the changing clothes part during my performances just to get a flow going, to get into the performance. It helps me think, and while I’m changing the clothes I talk, tell stories. It helps me get into what comes up next or thinking about what I should do next.

While you were changing clothes, you told a US touring story.

Actually, it’s a story I told so many times that it helped me get a flow going. 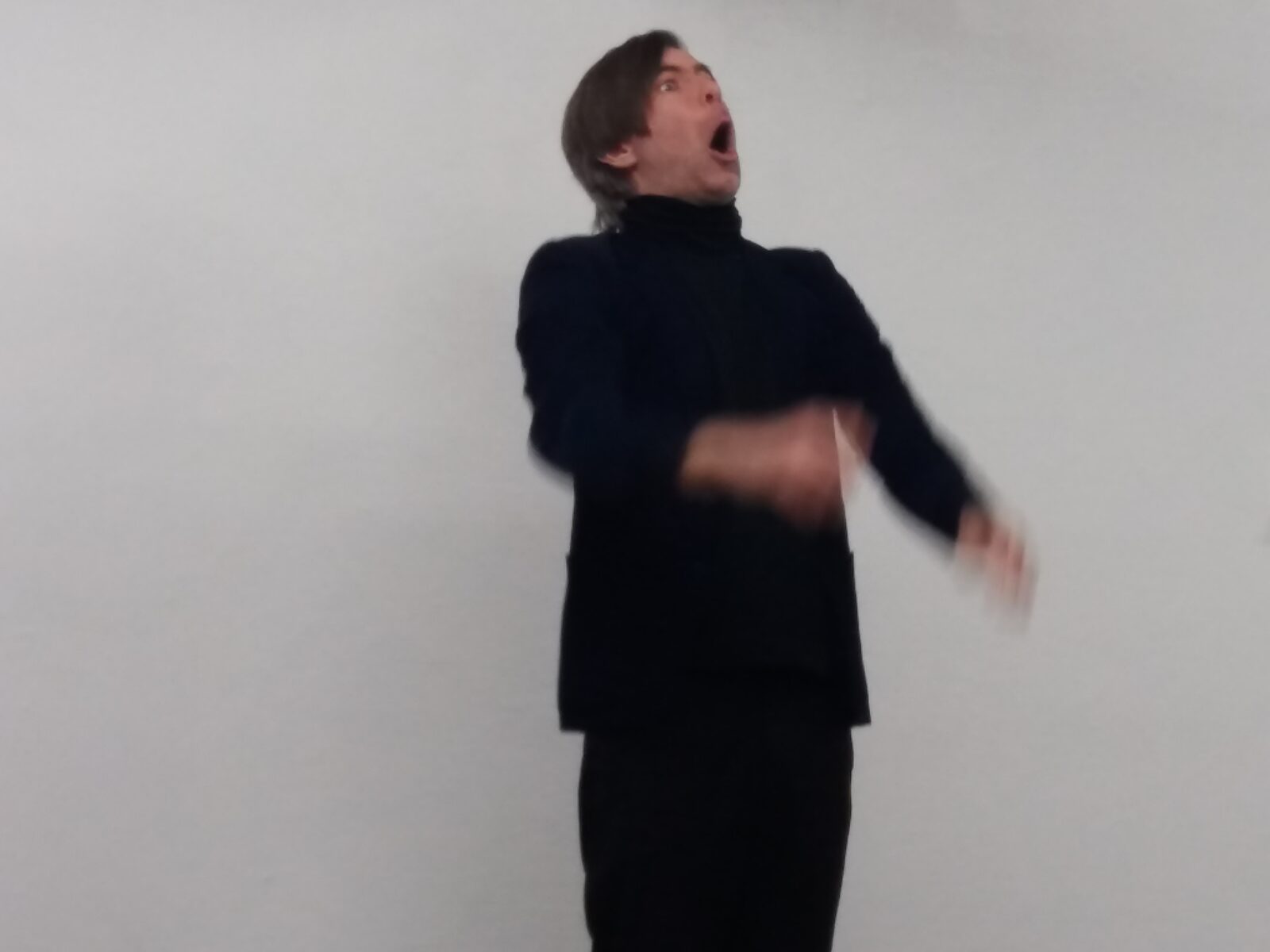 When you were undressing I thought, at a certain point, that you were going for the full monty but that was never your idea, right?

No, it was not my intention to get fully naked. But I like this idea that people wonder if that’s gonna happen. The last few times this year when I performed I had people telling me that they were glad that I didn’t get naked. Like I said before, it’s such a banal thing and even still today getting naked makes people feel uneasy.

You referred to yourself as “the laptop drone guy”. Is that how people see you?

I really don’t know. But during a long tour where I did more of a performance than music/sound, people came up to me afterwards either being disappointed and saying something like “Oh, I thought you were a laptop drone guy” or saying they were happy that I did a performance instead of a laptop drone thing. I guess you can’t please everybody.