We did an interview with Finnish doom-rockin unit Lyijykomppania two years ago, soon after the release of their fifth album, ‘Tietoja epäonnistumisista ja päättämättömyyksistä, tai Väkivaltaa ja vääriä lääkkeitä’. Don’t ask me what it means, there’s an answer in the interview and it’s too complicated.

And as Lyijykomppania never was the fastest band, suddenly another album was released in April 2021! It has a shorter name (‘Tarpeettomia ikävyyksiä’) and yet the band is able to offer killer stuff. Add this news to the fact that the band has its 40th anniversary this year, and you see that there was no other option but to do another conversation with Lyijykomppania’s leader Esa Moilanen.

I was going to start our interview with Covid-related question, but this year Lyijykomppania celebrates its 40th birthday and you have a new album, ‘Tarpeettomia ikävyyksiä’. Isn’t it the best sign of the band’s “health” and high level of activity?

Esa Moilanen: Might be. At least we all think this latest album was worth all the work we did for it.

What about official celebration?

Because of this Covid-thing hardly nothing was to be done. Our last gig at Korppi Rock Festival was in June 2020 and since then – all (few!) gigs have been cancelled or postponed. So it seems rather difficult to have some fun with our fans. And – of course! – our tiny for personnel only-“Celebration Day” (hail to Led Zeppelin!) did not take place because of some sad and stupid reasons. A pity.

I was listening to ‘Tarpeettomia ikävyyksiä’, and I wonder why does Lyijykomppania remain quite an obscure outfit for people outside Finland? You keep all the band’s features from the early 90s, you have this authentic individuality and at the end of the day you are able to offer catchy and really remarkable music!

Thanks for your kind words, but… I suppose our music has no larger interest as well in Finland as abroad. And marketing this kind of music with our resources is naturally impossible. Co-operation with for example some bigger distributor is obviously impossible. – I’ve heard some copies of ‘Tarpeettomia ikävyyksiä’ have been sold in Germany lately through Levykauppa Äx.

Did you ever have a period when you collaborated with a bigger label or distributor than yourself?

And how supportive are Lyijykomppania’s local fans? How often do you receive feedback?

Not very often. Some people contact us before or after the show. And we have our Facebook, but I don’t know what’s going on there. I don’t use Facebook.

What about the years you with Jarkko Strandman on vocals? He did play bass in To/Die/Fore, and they were quite popular back then so it could attract people’s attention to Lyijykomppania as well.

Any attempts in this case were not made. And I think To/Die/For and Lyijykomppania are quite different bands indeed.

Correct me if I’m wrong – the new album’s title could be translated as “Unnecessary boredom”, and I feel some irony in this name as new songs are anything but boring. I’m wondering what kind of message you put in its artwork? I fail to find any connection with the album’s title, and the cover is controversial –what is it? A scaffold or just a log for chopping wood?

I’d rather translate ‘Tarpeettomia ikävyyksiä’ like “Unnecessary troubles” or “Unnecessary difficulties”. And again you have something to think about… The artwork was mainly based on Lemmy’s ideas as well as the front and back cover of the album. It is an axe and a log for chopping wood. In the back cover you can see an old man in his cold house with no fire to warm him and an axe in his hands. Maybe he is going to make some firewood – or solve some other things, like unnecessary troubles…

Did you share all work over new song between you and Lemmy? I remember last time you told he has composed all music as you have wrote all lyrics for ‘Tietoja Epäonnistumisista Ja Päättämättömyyksistä Tai Väkivaltaa Ja Vääriä Lääkkeitä’.

As before Lemmy composed all songs, I wrote the lyrics and Vuorinen made the singing melodies. Arrangements by all us three.

It was fun to watch a video you’ve done for your new song ‘Mummot naftaliiniin’, it’s simple, and yet it has its energy and forgive me – commercial potential. Why did you decide to keep this video that simple?

Obviously because we are so simple. Black and white it had to be. We had a suitable (and cold!) place to shoot the video and one pro-class camera (wo)man with very simple lighting and nearly no staging’s at all. The Manu was mainly by our manager, gorgeous magister Katja Pihlaja and cut by a camera woman (I don’t remember her name, sorry) and Lemmy.

I won’t pretend – I didn’t even try to translate songs’ lyrics you put in the album’s booklet, let me be honest – it’s almost unreadable, but probably it’s just a part of grand plan. So I want to ask you to make a comment about the message behind each song on ‘Tarpeettomia ikävyyksiä’.

‘Kuileman eskadroona’ (The Squadron of Death): True-based story of one military Light Unit during World War II used constantly in very heavy fights against the Russians so the men were killed almost all – for several times (they were replenished when it was possible from reserves). Squadron is a cavalry (they had though no horses in WWII) unit the same size as a infantry company. – Based on interviews and literary sources; quite a pacifistic piece of Finnish heavy metal.

‘Tuhlaajapoika’ (A Spendthrift Boy): This song is about a person who gives a hell to nature or the future of the world: he has the right to consume! Burn gasoline, fly by jets to the other side of the world et cetera. Life is for living!!!

‘Asiantuntija’ (An Expert): You know: those who tell us things we already know or anyone who has even a bit of brains inside his skull can conclude. TV, radio et cetera. is full of them. – And I suppose they get well paid…

‘Yksinäisen tähden harhailija’ (A Wanderer of the Lone Star): You might say a humoristic story of a male person drinking alone at home, lights off, sitting in his kitchen “solving” the problems of life. In fact a sad story of (Finn) men’s alcoholism, loneliness, lack of social skills et cetera. The name of the song is inspired by Lyijycomppania’s “official” booze Jaloviina (a half vodka and a half cognac) which has a star on it’s bottle top. – Weird…

‘Mummot naftaliiniin’ (Grandmamas (in)to Naftalin): This song is inspired by the lack of nurses who work with our senior citizens needing 24 h care. Several irregularities have taken place in Finland lately, partly reported to the large public. My wife is a nurse working with those old people. In the night shift 2 nurses and 60 old timers. Once after the night shift her working partner – extremely tired – said something like: Bloody hell, if we could put those grandmas into naphtaline and then close them in sacks! – Now you know what is waiting for us…

‘Varpunen’ (A Sparrow): A rude ironic story about our hypocrisy. Shortly: one man walks perhaps to work in one dark and cold winter morning and notices a dead sparrow lying on the snow. He stops and thinks: Oh, if we all could become good people like that dead sparrow. – Maybe I crossed some limit writing this, but it’s done what it’s done.

‘Niksejä hevosen kengittämiseen’ (Some Tricks How to Shoe a Horse): Instrumental. Lemmy’s tribute to Jethro Tull (my favourite band). – Jethro Tull was an English (Scottish?) agriculturalist in the 1700th century who wrote a guide on how to shoe a horse. Might be a slightly prog / folk influenced piece played with very heavy metal touch.

‘ART’: The title comes from the words ahneus, röyhkeys, typeris (greediness, insolence, stupidity). A peculiar story (because it’s difficult metaphors). Let me tell you: after writing the ‘Viimeinen voitelu’ album something was left. I didn’t know what. Anyway: I wrote Antti Kaitainen (on Harmaita säveliä) as a kind of continuation to Viimeinen voitelu. Anyway: the story of Antti had to be shortened somehow or other ways the song would be too long. But after many years I decided to write the rest of Antti’s journey to the black lake. As I warned you: allegorical story hard to find out the point. But at least this part of Antti’s journey gave me a chance to mock those three things: greediness, insolence and stupidity.

‘Äänislinnan vakkamestari’ (A basket master-maker of Petrozavodsk): Should be the last part of Lyijykomppania’s Kantala Suite. A true-based story about a man who lived in my home village. During WWII he served in Äänislinna, obviously in the maintenance unit. Wounded badly in his feet during the last fights. After the war made his living in several works, but made very good baskets from wood sheets. In this story he had had “a couple” of beers and is bicycling home with a basket full of potatoes on his bike. He feels the potatoes go along the road. The boys see it and help him to collect those potatoes in the basket. At home vakkamestari notices that the boys have also put stones instead of potatoes in his basket. And he swears!

‘Töppöset pystyssä’ (Shoes Up): (Literally “töppöset” means a kind of boots made of felt; also used in Russia as far as I know). Again: a story of a man who cares only for himself. He has everything: a house, a boat, a cottage, a family and a good rank and work. Although he misses his wife and children (of course it was wife’s fault), he keeps his property and gives a hell to the other people. In the chorus Vuorinen shouts: “But in the end you are with your shoes up! (dead)”.

Thanks for revealing all these stories behind your songs. You know it’s both educational and entertaining, a kind of Aesop’s fable. Actually a rare thing nowadays. What’s your own favorite lyrics writer amongst rock or metal bands?

‘Tarpeettomia ikävyyksiä’ has a lot of Lyijykomppania’s original sound you worked through on your early albums. How different is the situation around the band nowadays in comparison with the period between ‘Uimakoulu’ and ‘Viimeinen voitelu’? Would you say the band became less or more popular?

Lyijykomppania has never been popular – and will never be! Let me tell you something: I suppose you’ll get further information about Lyijykomppania’s years 1993-1996 even this year. Let’s take just one thing: I feel our work or style of working has changed to a more professional one. But not in its bad sense: we still have good meals, have “a drink or two” (I heard somebody laughing!), discuss this and that and of course – sauna! Things like that. 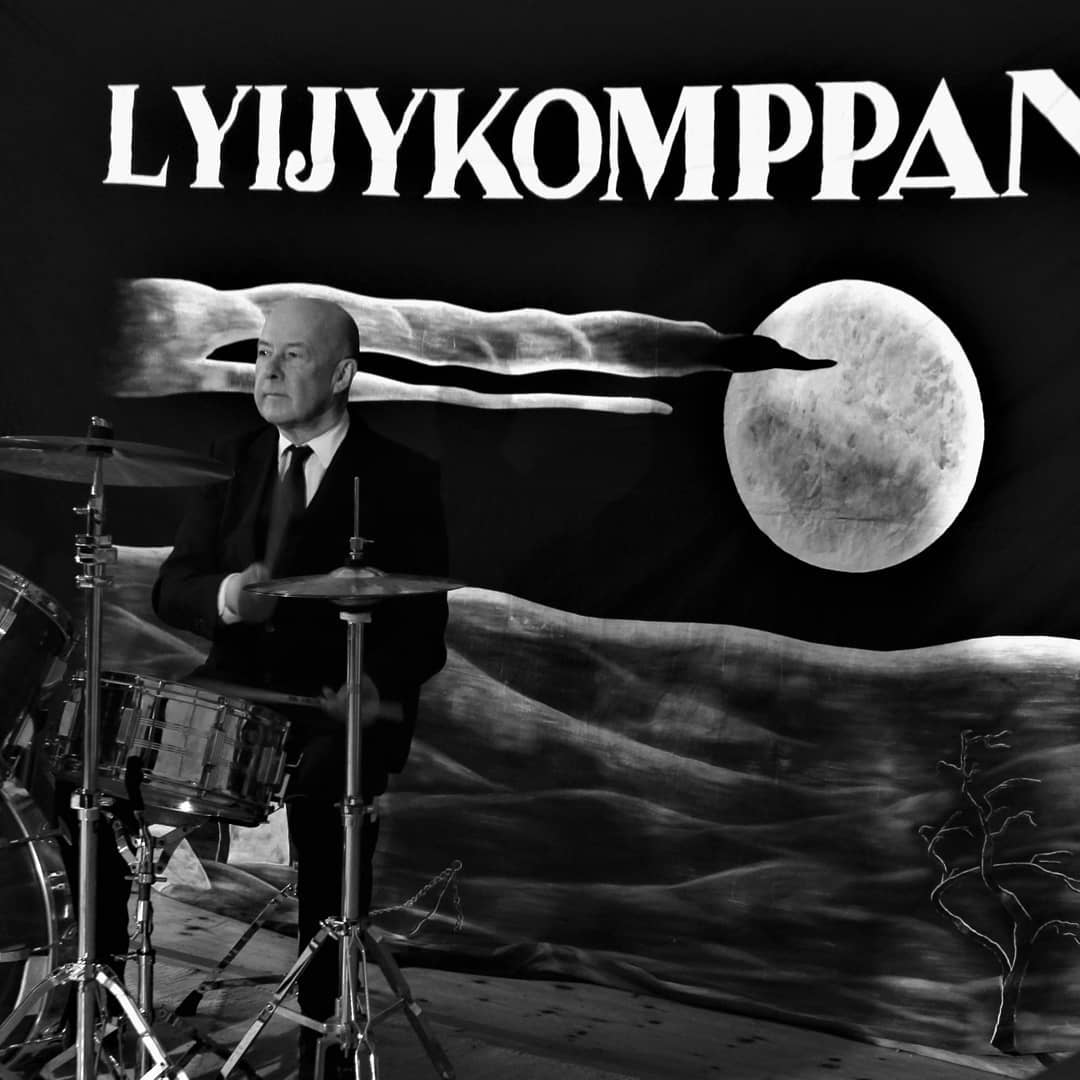 Der Greif is “resting” right now, partly because of Covid partly because of Antti’s and Palkeinen’s family and work matters. We are waiting for how this situation goes (as do Lyijykomppania). So still the same line up in Der Greif.

Thank you for another great interview! Accept my congratulations with Lyijykomppania’s anniversary and I hope the band will get proper recognition finally. You deserve it!