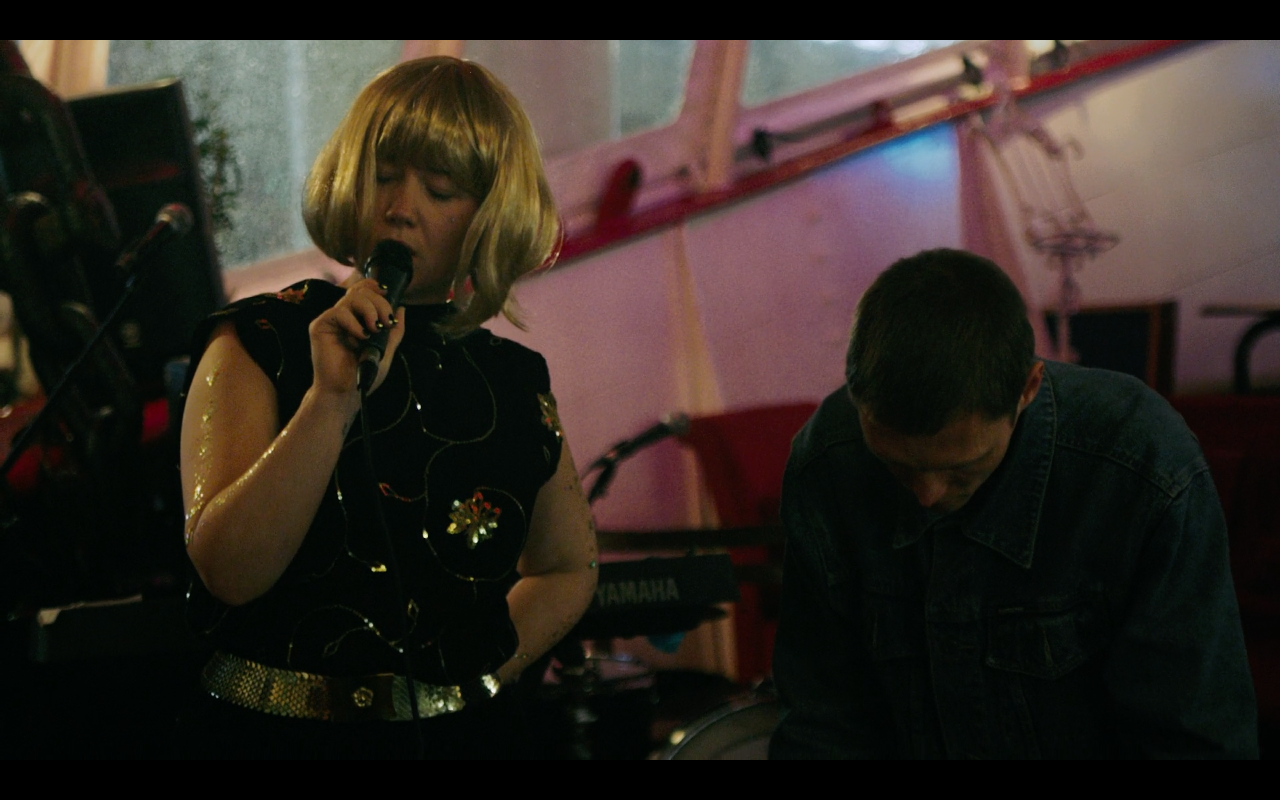 ‘Of Feathers And Bones’ is the melancholic lo-fi loop-based vinyl debut album of Goldblum, the duo of Michiel Klein (Lewsberg) and Marijn Verbiesen (Red Brut).

Some tracks are almost pop songs, especially when there are vocals. They reminded me of the Solex debut album.

Marijn: I must confess, I’ve never heard of Solex. I will have a listen.

Michiel: I’ve heard of the name but never listened to the music. But yes our music, and our recorded output specifically, is often structured as songs. But most of our music was created during improvisations, either live or at home. Afterwards I create songs like structures for some of the compositions. You could call these pop songs if you like, but maybe I see them more as folk songs with simple and repetitive structures. We don’t write climactic choruses and our music is not meant to reach a mass audience. Also, we don’t reproduce and repeat our songs. Live shows are improvised and I bring new tape loops every time to keep the element of surprise. Also ‘Of Feathers and Bones’ is not just a collection of songs, but two suites of songs. The songs often bleed into each other and in this way also work as one big composition per side of vinyl.

But apart from structures in composition, pop music and pop culture are an important part of our music and general outings. I mean we create loops out of pop songs so it’s obviously going to be a part of our sound. We use all kinds of music, whatever we find on the used cassettes, but pop music is definitely a part of it. I think the pop songs we like best contain melody, rhythm and noise in equal measures and that’s what we try to do as well. To create a mixture of very recognisable or memorable moments and abstract or obscure elements. 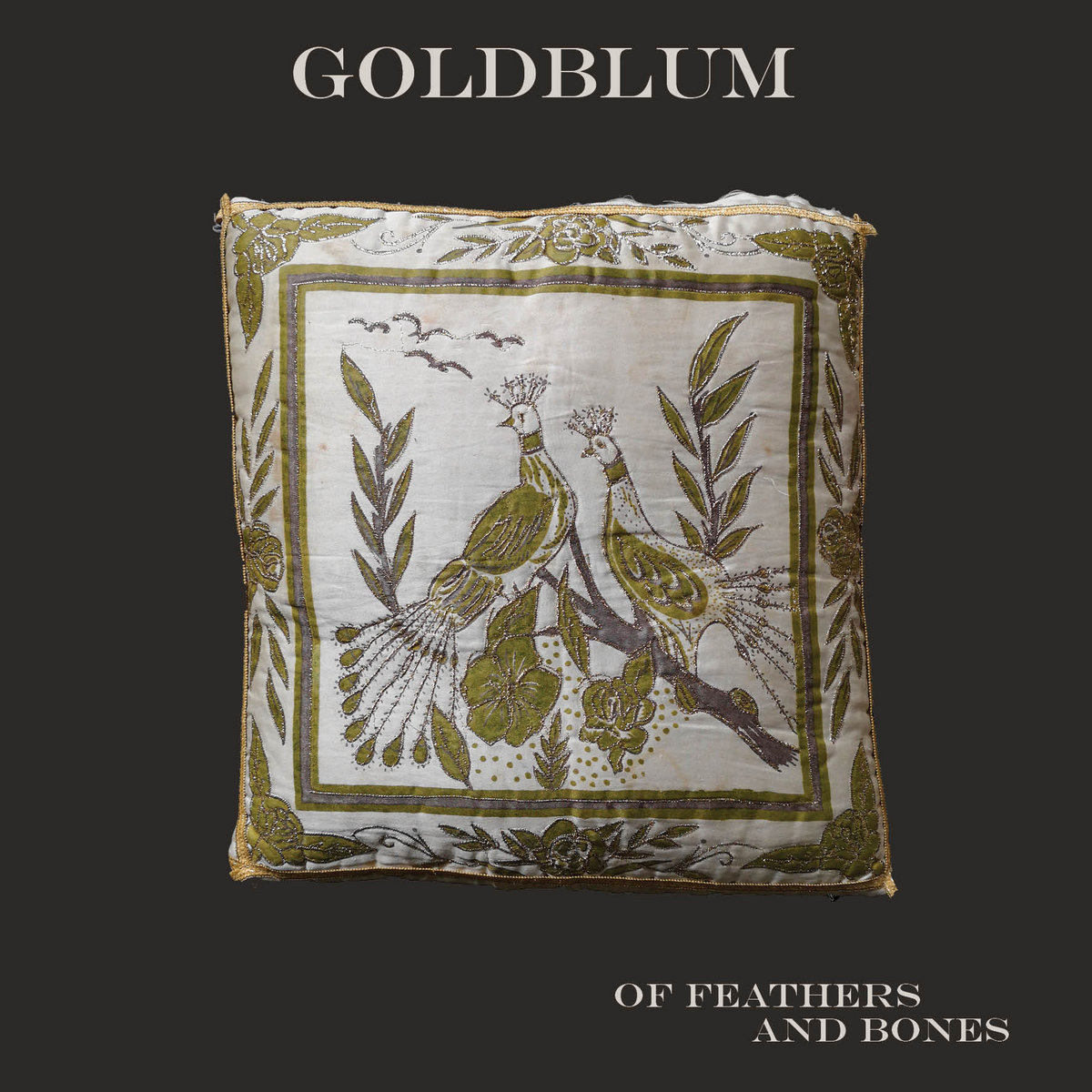 “Our loops are created randomly from second hand cassette tapes”

The loop which starts the album is not a clean loop.

Michiel: We are not trying to create clean loops with Goldblum. It might happen accidentally but not intentionally. We are not looking for the “best” parts of a certain song or composition and then loop them. Our loops are created randomly from second hand cassette tapes that we find on flea markets and in thrift stores. We work with the music that’s already on these tapes so it’s always a surprise what will end up on the loops and that’s the beauty of it. To work with material that we accidentally stumble upon. That’s what triggers us to get creative, the element of surprise. From there we can add our own vocals, or keyboards and all kinds of other instruments and objects and noises. Anything goes really.

How do you make your tape loops? The old-fashioned way: a piece of tape on a cassette? Or with a loop station? Or digital?

Michiel: We create our tape loops “the old-fashioned way”. Because like I explained earlier, that’s how we “select” our loops, with a crucial element of chance and surprise. But we are not analog purists, we record, layer and mix our sounds on a computer and if we feel like editing a certain tape loop after we’ve loaded it in the computer then we do it. It’s good to have a certain amount of “rules”, a frame, when being creative but it’s just as important to break those rules when you feel like it. In the end it’s about what works for the song or the album as a whole.

My favorite tape loops are the 18 minute long loop on Aaron Dilloway’s ‘Modern Jester’ 2LP and the ‘Lady In Red’ loop made by Oneothrix Point Never.

Marijn: Aaron Dilloway is one of my favourite loopers and artists. I saw him perform live just one time, in Tilburg in 2014 and I was drooling through the whole set. But that’s also because I cannot always control the liquids in my mouth in general. The Eccojams from Chuck Person move me to tears really. I don’t like all of his (Daniel Lopatin) work, but this is high in the sky.

Michiel: Yes, Dilloway and (early) Lopatin are favourites for sure. As are other people from the 00’s noise scene like Dylan Nyoukis/Karen Constance/Blood Stereo, Orphan Fairytale and the “free folk” artists from Finland. Other favourite loop artists, both in my youth and now, are hip-hop producers. Not those who make the “hardest” or “funkiest” beats or hi-fi productions, but those who take musical elements out of their original context and place them in a new one and make it alien and weird. Building a mood and atmosphere. RZA’s productions for ’36 Chambers’ and all of the first solo albums by the Wu-Tang Clan members are still some of my favourite recordings ever. Finding out later about DJ Screw’s psychedelic explorations and all these other underground DIY mixtapes opened things up even more. And when Earl Sweatshirt went full on introspective with ‘I Don’t Like Shit’ and especially ‘Solace’, a 10 minute song or EP or album he produced himself and just uploaded to YouTube, that was a very special moment. In my eyes ‘Solace’ is where this whole contemporary wave of introspective hip-hop, with Mike and Navy Blue and all these other artists really started and it’s inspirational to watch it unfolding in real time (even though I’m experiencing it from a big distance, listening to their recordings on the other side of the ocean).

Marijn: For me making and listening to music is all about the feeling, like how I often come back to Les Rallizes Dénudés and especially the ‘France Demo Tapes’. It’s dark, raw and psychedelic rock music, they play just one or two chords in a song (that might take up a whole side of a vinyl), but for Goldblum I used the sexy slow paced feeling to keep me grounded. Archie Shepp’s Blasé with those amazing vocals of Jeanne Lee is another favourite for similar reasons. On the other hand, Blood Stereo was important to find my “Innerlijke Stemmen”. Same goes for the surreal vocals of Ksiezyc, an experimental folk band from Poland.

The album got a, euh, “remarkable” pillow on the cover. I’m afraid to call it an ugly pillow. Bought at the same thrift store where you buy your tapes? Hope you didn’t spend too much money on the pillow…

Marijn: I love this pillow, thank you very much.

Michiel: Yes what you might find ugly, we might find beautiful. And we find this pillow very beautiful. It was the reason why we chose it as the image for the front cover. But it also reflects some aspects, some contradictions, that I feel are important to Goldblum. It brings together the exotic and the mundane and ordinary. It’s shiny with gold and glitters but also very worn out and dirty and used. Like most pillows it’s nice and soft but it also contains some synthetic fabrics that kind of irritate your face skin. Is it a utility object or decoration? Either way, we’ve had and used this pillow for such a long time, it’s become a part of our lives. This cheap mass product, made in some far away factory, became a deeply personal totem.