Recorded back in 1968, smack dab in the middle of the psychedelic 60’s ‘Live At Ronnie Scott’s’ was derived from the personal recordings of drummer Jack DeJohnette, where they’ve been in storage for over fifty years, with over two hours of music has been remastered for this outing.

The late 50’s and nearly all of the 60’s saw some simply brilliant jazz being laid down, those years also saw some extreme and unimagined changes as well, where cool cats and kittens were blown away with the stunning jazz conversations that were being held on stage, where lucky for so many, a good number of those have surfaced over the years, redefining and re-envisioning those wayward nights. Here Bill Evans is backed by his trio, and I use the word ‘backed’ loosely, as these gents swing together like no one’s business, where we find Eddie Gomez and Jack DeJohnette simply setting the stage on fire in their low-keyed and at times demandingly emancipated matter, one that never ceases to please these ears.

Not on this outing, though on the tapes, you get to hear Jack DeJohnette talking with Chick Corea about this show and these recordings, where perhaps one day we’ll be privy to that as well. As I’ve said, this collection is drawn from Jack DeJohnette’s personal archives, where ‘Live at Ronnie Scott’s’ comprises twenty scintillating tracks captured during the Bill Evans Trio’s month long 1968 residency at the eponymous saxophonist impresario’s Soho club. This is Resonance’s second live Evans album to emanate from that venue, along with Evans in England, derived from a 1969 stand at Scott’s and featuring Eddie Gomez and drummer Marty Morell.

Saying that the music is creative would be an understatement, it’s a high water mark for Evans, where he became a hero for a new jazz generation, complex in its understated and in understandable manner, things come off as simply flowing, where it’s all quite beautiful. Yet with that in mind, expect to be crushed by crashing symbols and a whopping snare drum that may sound initially oppressive, though I assure you, you’ll slide into the grove and never look back. 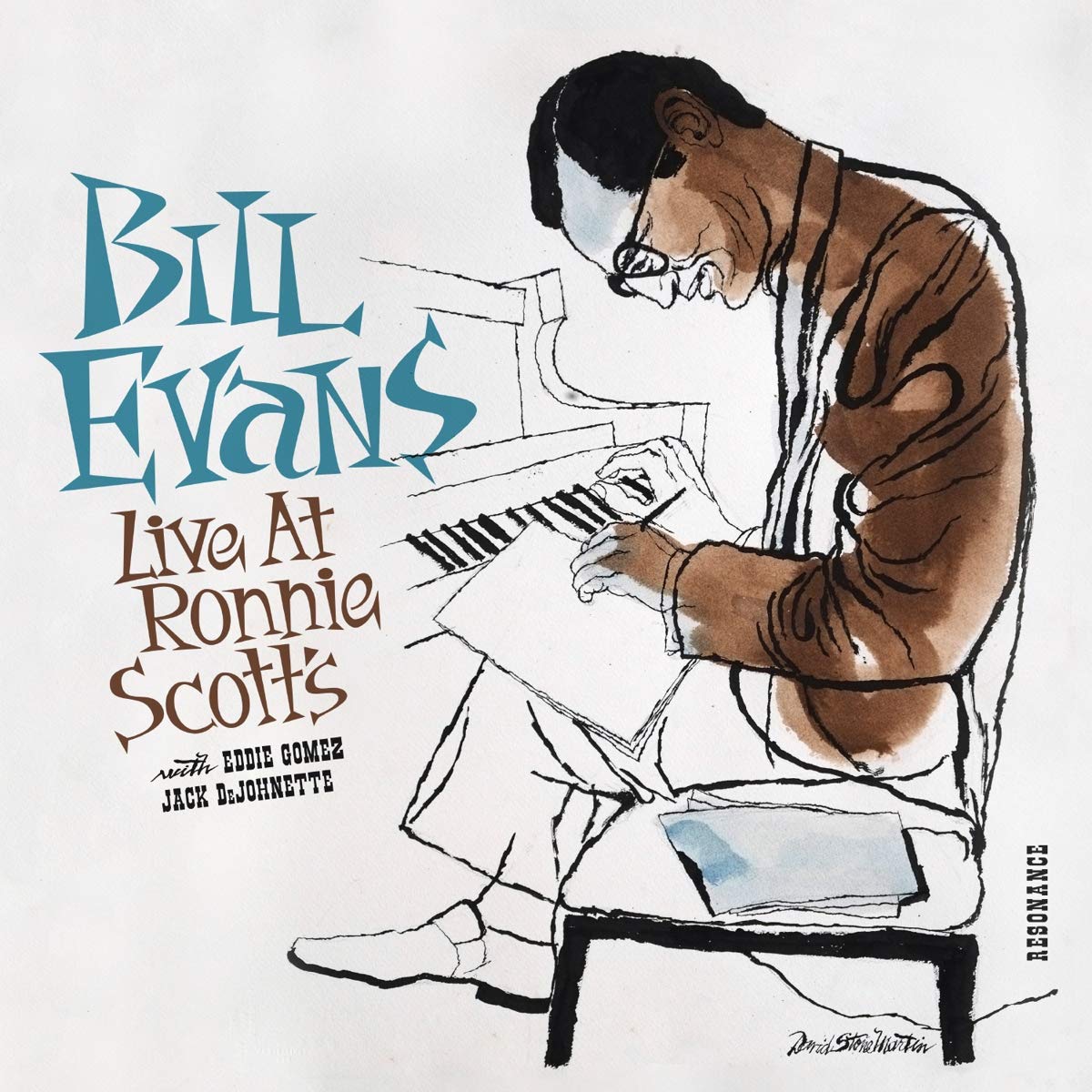 Others have said that the overall result is a somewhat lackluster performance by Evans. Either due to percussive agitation or tour boredom, he tears through songs with little in the way of grace or tenderness. Still, on the other hand (and we do have two hands), there are plenty of bright spots. Gomez delivers sublime solos and is showcased extensively on several tracks, while on a number of songs DeJohnette produces lovely support, whisking Evans’s temperament into a froth. In those cases, songs turn out sunny side up and are not to be forgotten.

Now, this is not an essential Bill Evans’ album by any stretch of the imagination, this is for those who admire live recordings, or for those who are completists. All of this material may be found in other places and delivered far better, though it is a delight to turn back the pages and remember when.

*** The Fun Facts: Illustrator David Stone Martin has created a one of a kind lithograph to grace the over, a continuation of the work he’s done since the 1940’s, with the 180 gram double vinyl set being mastered and cut at 33 1/3 rpm by none other than Bernie Grundman, pressed by RTI and limited to seven thousand hand numbered copies world wide.