After eight studio albums of pummeling, intelligent, virtuosic rock and thirty years of steady touring, Local H has released Lifers, an album that ranks pretty goddamn high in a discography so reliably excellent it’s getting too hard to rank the albums at all.

“The louder you are the more fun you have.”

Amazingly, the band has only two members: Ryan Harding on drums and Scott Lucas on everything else. During a hectic time of releasing Lifers into a pandemic-choked world and bringing live music back to the American Midwest via safe, socially distanced drive-in shows, Mr. Lucas was kind enough to answer a handful of questions about the new album.

Lifers arrived smack-dab in the middle of a global pandemic, obviously nixing all promotional touring plans. However, you’ve still committed to a rigorous performance schedule, broadcasting many solo ditties, plus two (so far) three-hour Local H concerts, one celebrating Lifers’ release, one a fan-voted album in its entirety.

a. What sorts of impetuses are driving these broadcasts? Surely there’s an itch to perform and a wish to connect with fans, but you’re really going full bore.

Scott Lucas: Yeah. With the new record, we were totally gearing up to get out there and go on tour. And we took most of the year off last year to make people “miss us” — so that itch to perform was SUPER itchy. We just decided to put all that energy into streams and daily impromptu cover performances. Each time you put out a record, there’s that instinct to shout it out from the rooftops. Usually that means going out on tour. Couldn’t do that this time. So we did what we could.

b. Your live shows often end with the audience passing your sweaty body along the room to the merch table, where tons of giddy fans can lean in and let their boozy breath waft over you. Of course we common folk can only speculate, but have you thought about what an H show will look like in the post-pandemic world?

Who knows? Obviously, I’d love to get back to those intense sweaty shows someday. But maybe those days are gone forever? I sure fucking hope not.

“We’ve got a right to be fucking angry” 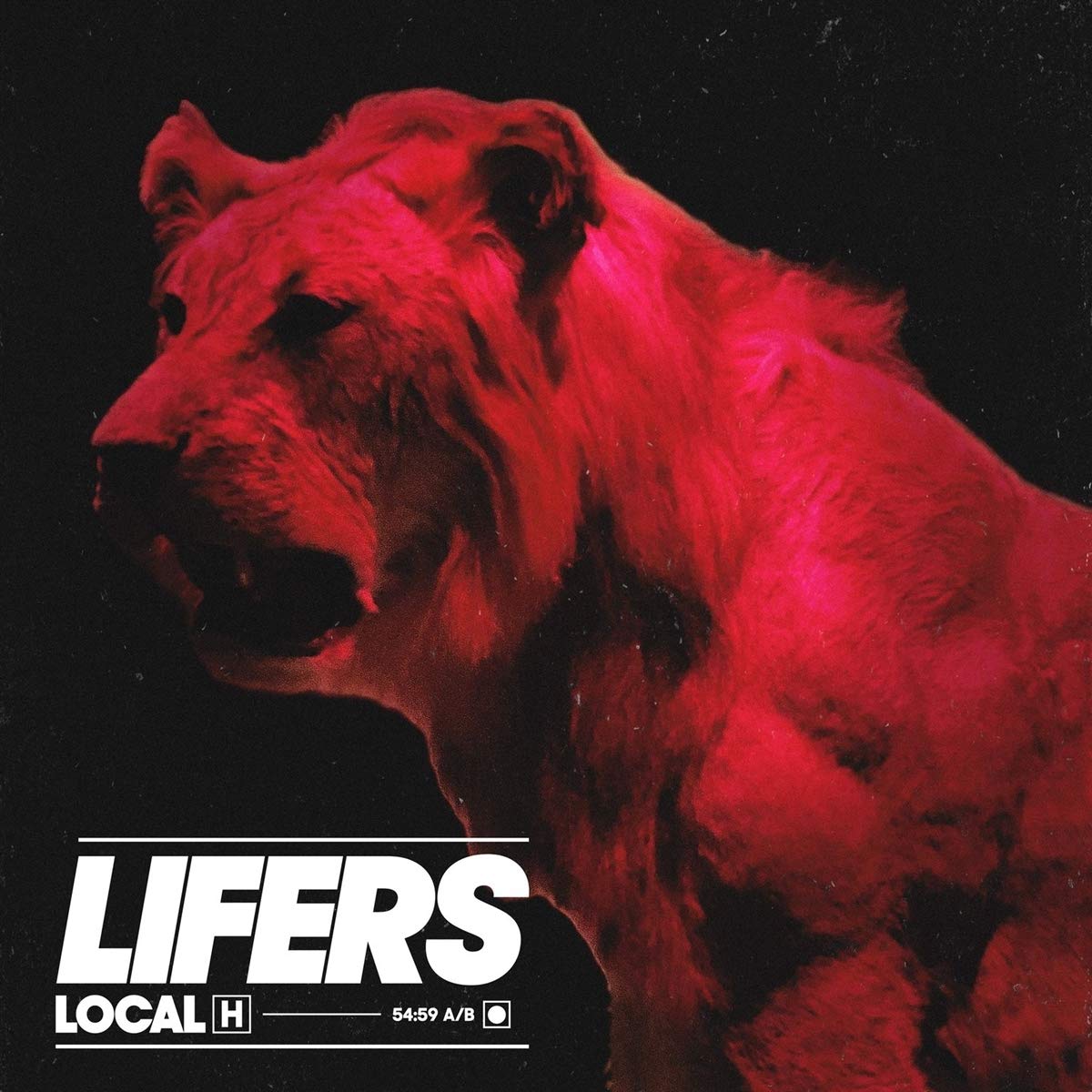 You’ve stated that Lifers “might be a concept record about the end of the world … or it might just be a party record with loud guitars and cowbells.” The opening song, “Patrick Bateman,” definitely makes a case for both takes. The guitars are revved up, the background vocals are harmonized, and there’s even some good old-fashioned tambourine a’shaking. But the lyrics, about “lizards wearing human skin” with “fans in the Ku Klux Klan,” seem to point toward one particular orangey, gelatinous American psycho. There’s something cathartic about listening to such a dismal message conveyed so buoyantly. Are you after catharsis with “Patrick Bateman”? Rattling the cage?

People always ask “Why are you so angry?” And sure I can be angry —we’ve got a right to be fucking angry— but I think people miss out on the fun parts of bashing the shit out of your instrument and screaming your head off. It IS cathartic. A friend of mine used to say, “The louder you are the more fun you have.” He had a point. The trick is to just be honest about what you’re doing and saying.

Lifers has a distinct shape/organization. The shorter, punchier numbers get the show going, but by the second half the album has stretched out in many ways. Can you talk about your sequencing decisions? For example, was a monster like “Defy and Surrender” ever in the running to open, or was it destined for the back half? Was the spacey, slow-building “Innocents” always going to bring things to a close?

That was definitely the plan. Almost to cleave the record in half. The front half is for the “casual” listener. The “don’t bore us/get to the chorus” folks. The back half is geared more towards our hard-core base. The true-blues who are more inclined to get adventurous with us. The people that don’t give a shit about “Bound For The Floor.”

What about the shape of a specific song like “Defy and Surrender”? It opens with some guitar riffs that sound instantly classic, but by the end of its ten-minute running time it has morphed through a lot of sonic space. Can you talk about how you went about writing/assembling such a beast?

Putting a song like that together is a lot like putting together a Frankenstein’s monster. You’re stitching together a bunch of parts that don’t necessarily fit and you have to figure out a way to make it work. To make the beast get up and terrorize the villagers. Songs like that are a lot of fun. Especially live.

As the last sinister, echoey guitar lines (or are those synth noises?) fade at the end of “Beyond the Valley of Snakes,” “Sunday Best” arrives, one of the downright loveliest songs you’ve ever released. How did such a beautiful track arrive on Lifers, practically sharing centerpiece duties with “Snakes”? (And, since “Sunday Best” turns out to be a love song, how would it get along with the dozen of its decidedly bitterer love-song cousins on Twelve Angry Months?)

We’ve always included mellow acoustic songs on our records — but, yeah, this is definitely the best one we’ve ever done. That’s just a Zeppelin thing. The light and the shade. Dynamics. All that crap.

After thirty years in the game, your guitar prowess is legendary. You can make that thing, it seems, do whatever you want. On “Demon Dreams,” for example, the rhythm guitar is fast and buzz-saw-sharp, and the lead lines sound like you’ve harnessed some kind of magic ghost bow. On a song like “Hold that Thought,” though, you step back and let a simple (but very catchy) bass line do a lot of work by itself. How do you decide your approach?

I don’t know how much thought is put into it. The riff usually dictates that. Again — it’s all Zeppelin. That whole “guitar army” thing that Jimmy Page was doing on those records made a huuuuge impact on me when I was growing up. I also love how he would just make the records and then figure out how to reproduce it live later. Like, fuck it. The record is the record. The live show is something else.

You have a knack for repurposing colloquialisms in your lyrics. You can make a phrase like “Where there’s a will, there’s a way” (or “Call your mama”) sound darker (or even more transcendent) than it ever would in its “normal” context. Do you gather these types of phrases with the intention of reusing them, or do they arrive serendipitously?

I usually just collect phrases and couplets and keep them in my notes section on my phone. If I hear something that strikes my ear, it goes in the phone. It used to be pockets full of bar napkins. Now it’s the phone.

Your enthusiasm for films is well-catalogued. How does that medium influence your music? Are some Local H albums analogous to the work of certain directors, cinematographers, actors?

Sometimes. Like Pack Up the Cats was influenced by the structure of Goodfellas and Boogie Nights. That whole tragic rise and fall thing. But to be honest, I’m influenced by everything. Regardless of the medium. I don’t really believe that rock musicians should be referred to as artists—that shit drives me up the wall—but even if I did, I don’t think I’d think of myself as one. I’m more of a fan. Of everything. All the way down to the shittiest disposable pop crap. Not so much an artist. More of a regurgitator. That is if you wanna be gross about it.