Pauwel De Buck is a tape collagist- and manipulator from Belgium. His latest release is a self-titled mini-album on Kerm.

It’s pointless to still call it ‘experimental’ or ‘avant-garde’

This is what I think I’m listening to on the A-side of your tape: “An over weighted middle aged man at a fitness work out, with his dog sitting next to him.”

You’re right, more or less at least. It was no a fat guy, but me who went out for running when on holiday. I recorded my breath and looped it afterwards. I never go to run so I was completely knocked out after 10 minutes. The further development of the piece reconstructs me loosing control over my own body and mind during this complete waste of energy. I don’t like sport at all, but thought it would do me good.

Those fast forwarding and rewinding tape sounds on the B side, is that what you recorded or is there something wrong with my copy of your tape?

I don’t think it’s your tape, as far as I know about the quality control of KERM these things don’t happen with his releases. On the other hand, there was something wrong with my tape deck and especially my tape delay, the only effect I use when making music, the old machine is so worn out that it starts to sing on itself, even when I leave it on and do nothing with it. I had very beautiful moments with it in ‘the studio’.

People like Aaron Dilloway, Dylan Nyoukis, Graham Lambkin, are those your heroes? Or you do I have to go further in time: LAFMS, Henry Chopin, Godfried-Willem Raes?

It is through all the above named people that I realized that making music can be a very simple thing in itself. Without owning all that expensive equipment or being a well trained musician. When I discovered the music of Chopin I was completely blown away about its genuine simplicity and the craftsmanship of something he completely developed himself. His music (and that from the other people you name here) had never felt radical to me, just very honest. To me this is the output of a process of listening to sound without putting it into a musical hierarchy and transforming it into something of what is created by just using your own imagination.

“There’s so much more to do with a the idea of recorded sound.”

I never took any music lesson and never played any ‘real’ instrument. At some point and without any clear reason, I started to mess around with some music software, but that quickly bored me out. I kept a strong obsession to make sounds but I didn’t have any input, so I started to record sounds on a cheap zoom recorder and collaged and looped them into what was for me a musical piece. This transformation has always been a very important thing when making music. When I started making these recordings I was invited a few times for festivals focusing on field-recording, but listening to water drops and so called city-soundscapes for a whole night wasn’t the most inspiring thing, I quickly left that so called scene of ‘sound ecologists and researchers’ and went my own way with it. I always thought there’s so much more to do with a the idea of recorded sound. In that way I feel more related to the artists you name yes.

You use tape and tape recordings to make your music. Does this make your music retro, you think? Or is it rather nostalgic? Or should I see it as a kind of tribute to tape music and tape manipulation and old cut-up techniques?

None of this makes sense to me. I only use tape because it is so direct and simple to use, you don’t have to understand anything of this technology because it is so basic. I know there are people pretending that you have to know the physical concept of how tape works in order to make music with it, but that’s just bullshit. I don’t know how it works in its core and I’m able to use it and create my own universe with it, you just have to develop your own techniques and go on with that.

What I do like about tape, and not from the aesthetic point of view, is that once you start to work with it and manipulate it, it creates his own language on top of what you intend to do with it, it has his own will and you just have to accept the mess it creates. This of course only happens if you work with machines which are half broken, as the ones I use. If you try to get your machine in top shape you won’t experience the magic such an instrument can give you. 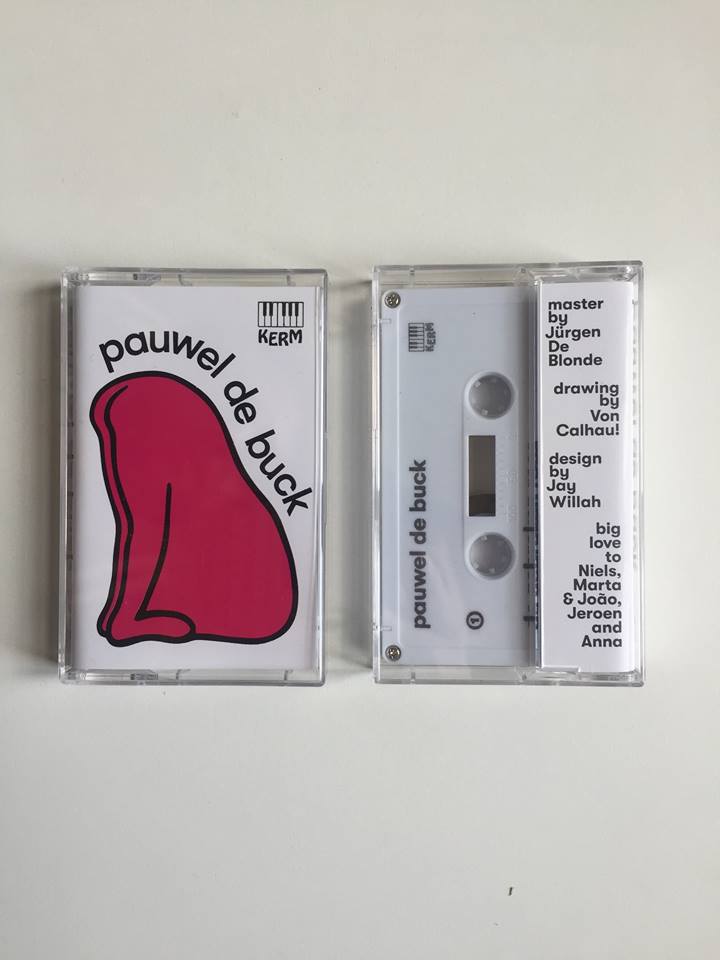 Why do you choose for tape?

As I said, it is easy to use and very direct. If you don’t play an instrument, you don’t want to work with computers and don’t have the money to buy expensive synths but you’re thirsty to discover and create new sounds, you automatically come out with a tape machine. I still have the feeling that I can stretch possibilities with this gear. Although my recorders are getting rusty and start to disfunction more and more because of using them in a rather unorthodox way, they still work and keep on making sound. Real strongholders!

You’re in the ‘avant-garde’ genre, but is ‘looking back in the avant-garde’ not a contradiction? Is it not your task to ‘push things forward’? Or can’t we go ahead without knowing our past?

This is how you see my music, but I don’t place myself in this tradition. I listen to a lot of that music, but when working on my own music I’m pretty much in my own world and can’t be bothered with other people’s work.

Also, there’s no task for me when making music, I can do what I want, If I’d like to push it backwards that’s equally fine. I don’t see any reason why people try to be visionary in making that kind of music, it’s all done, it’s pointless to still call it ‘experimental’ or ‘avant-garde’ music, most experiments with tape and electronic music are done by now.

Rashid Becker said that, because he’s so much aware of the enormous amount of releases, that he feels it’s his obligation to be selective with his own output. Does this sound recognisable to you?

No, not at all. I don’t want to make a difference in what gets released. I also don’t care about how much gets released. I think the more, the better, if I don’t like it I don’t listen to it, someone else will do then. The reason I only put out a tape every 5 years is because I work very slowly and I’m not constantly in my studio. Sometimes I don’t touch my equipment for months.