Down on the streets of Chicago, in the musical venues and the cozy dim bars around the city, catch Daydream Review glaring on the stages like a diamond mirroring a color splash of psychedelic music tinged with a sparkly dream pop sound. Formed by Elijah Montez, the band has released 3 singles to date, prior to their self-titled debut album release. Lose control and find yourself immersed in their trippy and atmospheric sonic texture which unveils the story of self-exploration at its best.

Where are you guys from and how did Daydream Review start?

Elijah: Daydream Review kind of started in Chicago… Eric (drums), Zac (guitar/keys), and Derek (bass) are from the Midwest, but I’m from Austin, TX. Before I moved up to Chicago, I wrote and performed with a different lineup under the name Laissez Faire Cassette. I guess Daydream Review is the spiritual successor to all of my previous writing projects. 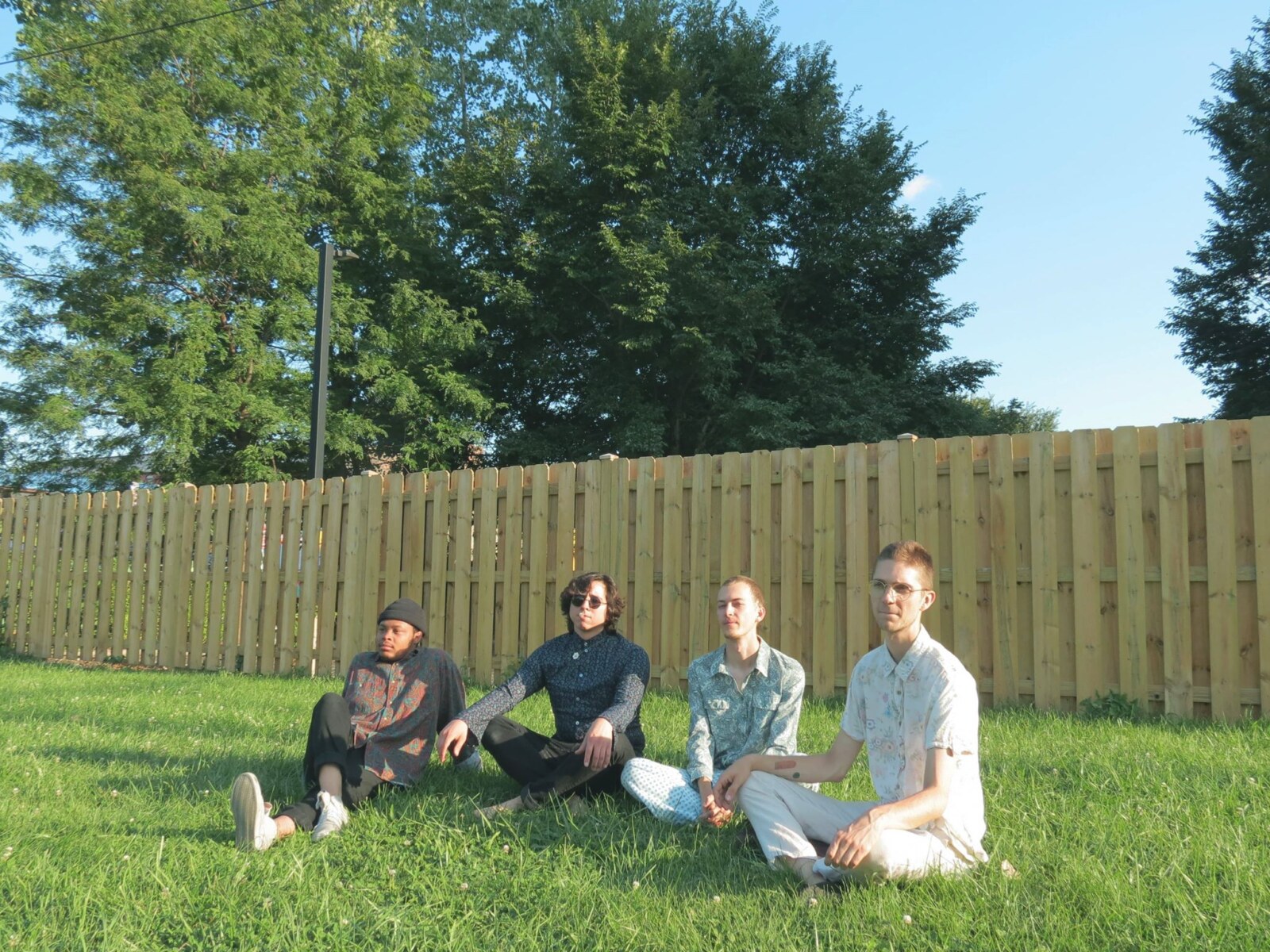 “I guess Daydream Review is the spiritual successor to all of my previous writing projects.”

What about the line-up? And how did music hook you guys to pick up your first instruments?

Elijah: Ha, the line up just changed a little bit! Derek, our bassist, is the newest addition. Personally, playing music was something I had always been exposed to when I was a kid—my grandfather played bass in a Tejano band when he was younger and so there was this existing exposure to it from my family throughout my childhood. I took violin classes in elementary school and Spanish guitar in high school and started fiddling around with writing songs around then while also learning bass and guitar, but it wasn’t until I was in college that I jumped into writing and recording.

Derek: I had always known I wanted to pursue music from a young age, especially after watching my friend play Red Hot Chili Peppers covers on his guitar. I fell in love with jazz in high school and started playing bass with friends, but nothing serious came out of that. Then for some stupid reason I decided to quit all of it and study architecture. After a miserable two years, seeing two of my favorite bands (DIIV and Hoops) play live forced me to reckon with the fact that I had abandoned my true passion. So I moved to Chicago, even though my parents advised against it, and studied recording at Columbia. Now I’m out here living my dream, or should I say, daydream?

Zac: I always loved music, I would listen to and sing songs all the time at a young age, and was always curious how it was made so I decided to dive in at about age 12, starting with keyboards. Then I started experimenting with production at around 16. And then I started incorporating more instruments after I met a good friend of mine who played other instruments. He inspired me to learn guitar and put me onto some good music that inspires me to this day. Definitely, having friends who played other instruments helped me to get into playing more.

Eric: Yeah, and I’m actually just Mitch Mitchell brought back from the dead.

Why “Daydream Review”? How do you describe your sound?

Elijah:“Daydream Review,” the name anyway, I first thought of as an album title for my previous project, but the meaning is related to this propensity that I think a lot of people have to analyze, or over-analyze, their own experiences, especially experiences with psychedelics. I’d say the sound is a result of a lot of introspection and nostalgia. 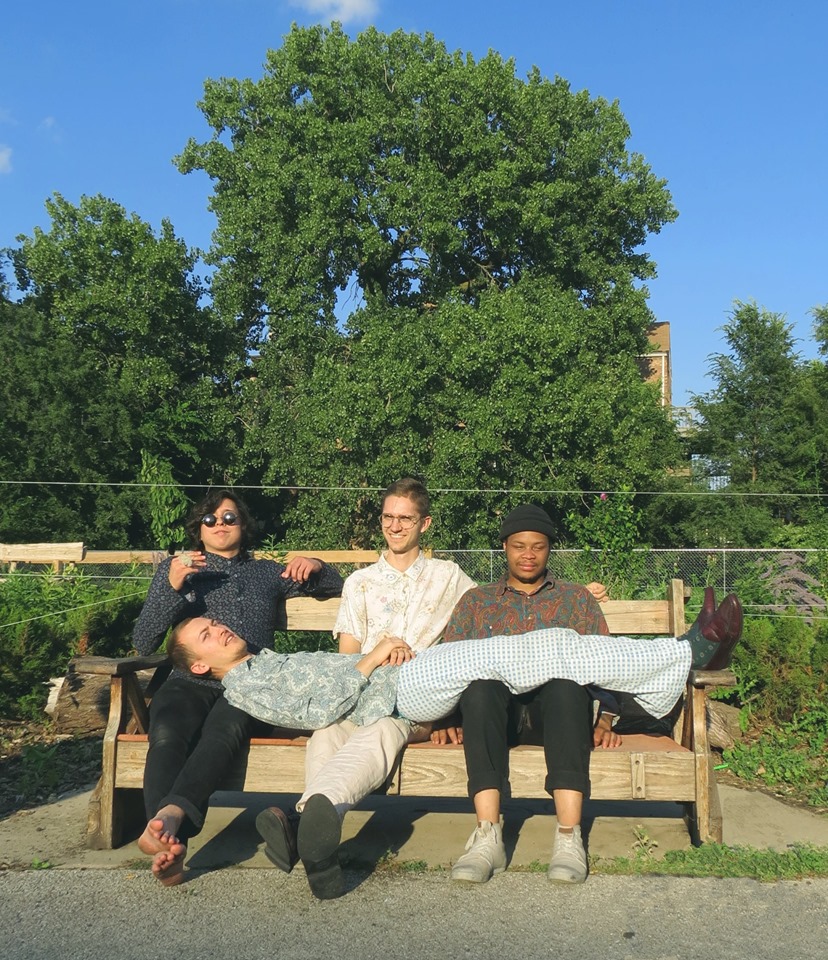 What are your icons and biggest influences, whether it’s other artists, music, film, life, people?

Elijah: In terms of specific people? Brian Wilson… there are others, but he looms large in my mind when I think of people that have an impact on my music. Brian aside, the friends I’ve made in Chicago who make music are amazing and inspiring. It’s lovely knowing people personally that are doing things you admire, and exciting to watch them succeed.

What are some of your favorite records?

Elijah: Pet Sounds by The Beach Boys – I think it’s rooted in a lot of the same stuff I use as a basis for writing, which is this very beautiful sense of nostalgia and introspection.
Magical Mystery Tour by The Beatles – I personally would put it up against Sgt. Peppers, it’s just that this album is kind of a hodgepodge of new weirder songs and the odder tracks that didn’t make it onto Sgt. Peppers. It feels very experimental and fun.
Tulips by Frank Maston (interview here) – It’s like an instrumental version of Pet Sounds. A lot of the music is very evocative of the same feelings but without lyrical content, which is quite lovely.
Skiptracing by Mild High Club – The arrangements on this album are so well-thought-out. Alex Brettin has a penchant for adding subtle details that can add so much to a song, so there’s this sense that all the pieces are critical.
Lonerism by Tame Impala – The lyrical tension on this album is soooo good and the music does such a good job of supporting it. Also, the music just fkn rips.
Moonlust by Holy Drug Couple – The atmosphere of this album is ethereal and surreal. Its arrangements are also 10/10.
Dusk at Cubist Castle by The Olivia Tremor Control – The melodies are simultaneously lush and understated, there’s a sense of subtlety that’s taken advantage of and the band has a willingness to experiment that’s hard not to love.

You dropped your third single, “Looking Glass,” a while ago. Would you like to describe the story behind this track for the readers?

Elijah:“Looking Glass” is about the buildup of a trip, that feeling of turning your head and realizing things are shifting and finding yourself in an altered state; a sudden change. You don’t even catch it right away, which is fun—you just find your surroundings blooming into something else entirely. The title references that, looking in a mirror on a trip is always a strange moment and so it ended up guiding the structure of the song, with each part building into a new segment and then flowing back together by the end.

“The writing process is a place for catharsis to occur” 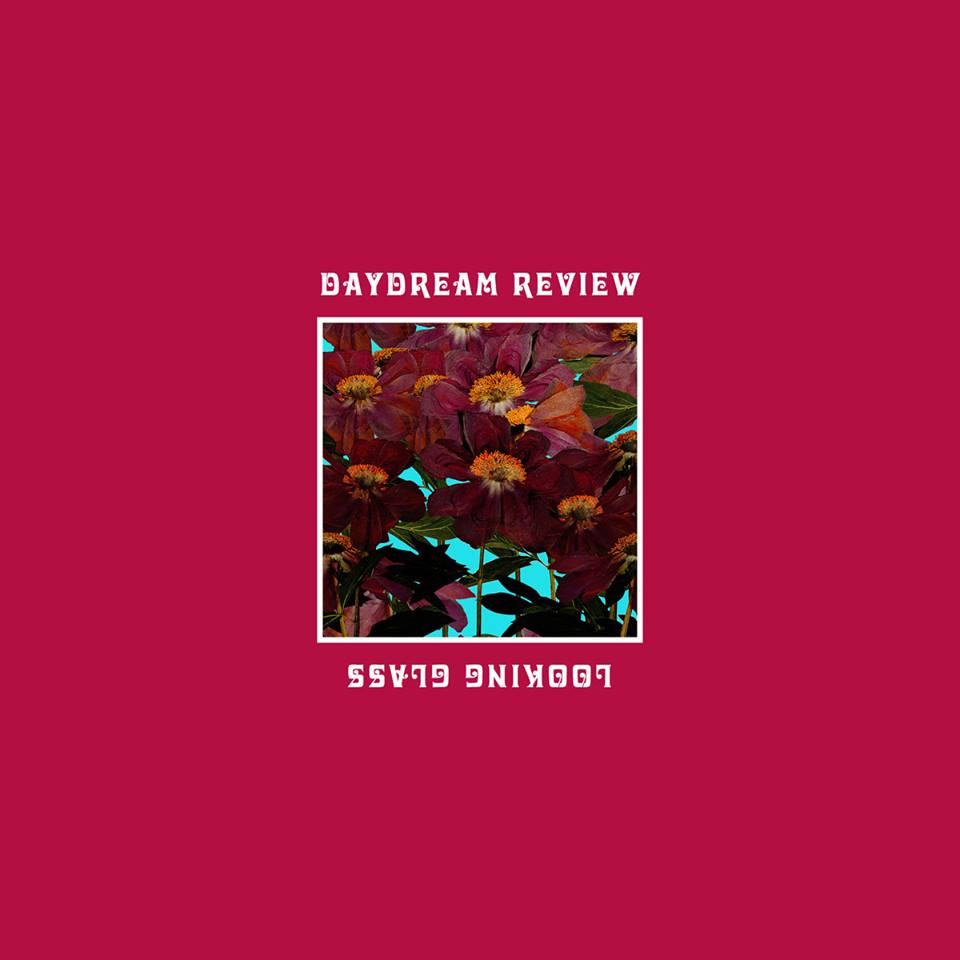 To my personal view, your trax are the result of a musical blend, “A small piece of the whole” and a “rainbow drip splash” of positive personal experiences. What do you think?

Elijah: I tend to write things that are more positively influenced, and perhaps a little escapist… Music definitely serves as a positive outlet for me to counter dealing with depression and anxiety, so some of the things I write about are initially rooted in those feelings. The writing process is a place for catharsis to occur, and turns those thoughts and feelings into something positive. So in a roundabout way, yeah, I’d agree with that.

I believe you are feeling so excited for working on your debut album. Can you give us some updates on it? How is your experience with the album making in Chicago?

Elijah: We’re super excited! We have 4 out 10 songs wrapped up, and 6 to go. Of those, about 4 have a more concrete direction they’re heading in, and 2 have a more loose form that I’m playing with. Making the album in Chicago is awesome, though. There’s a really supportive scene of musicians here, and I’m grateful to be making music alongside them.

When you start a new piece, do you start with something in mind, or does it just create itself as you go along?

Elijah:Generally, when I sit down to write, I have like 4, or 5, or 10 ideas that are all kinda jumbled up and “writing” is just the process of smoothing them out and piecing them together. Writing like that lends itself to experimentation while you’re tracking, which is fun; like having a general route in mind, but allowing yourself to wander. It also lends itself to having the most to work with in terms of arrangement—having an overabundance of stuff going on is not a great thing for a final track, but when you’re writing it’s great to have a lot and then be able to remove things and allow the arrangement to get more power from this subtractive method of composition. 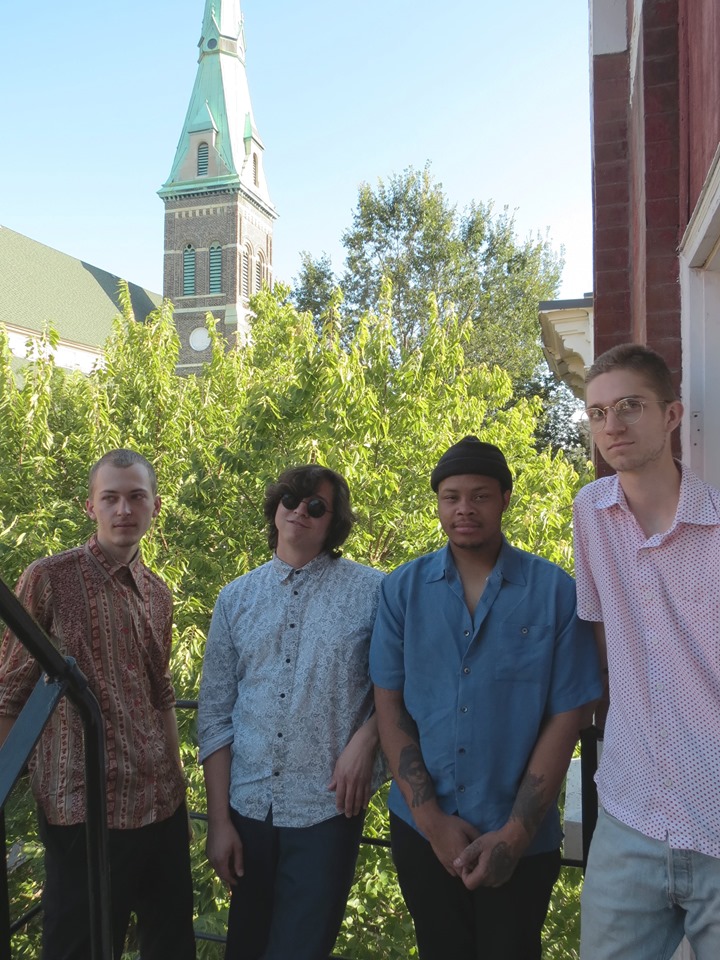 What are your plans for the immediate future? And any gigs or festivals you dream to perform at for further future?

Elijah: We’re working on our first full-length album, so wrapping that up and sending it out into the world is something we’re all excited for. Of course, we’ll be playing gigs around Chicago in the meantime (most immediately, 9/28 at 365-VIII and 10/20 at Sleeping Village)!! We would love to play a specifically psychedelic festival like Levitation or Desert Daze—Levitation particularly because I grew up in Austin—but we’re hoping to play some shows at SXSW next year, which would be a trip after attending as a fan for so many years. 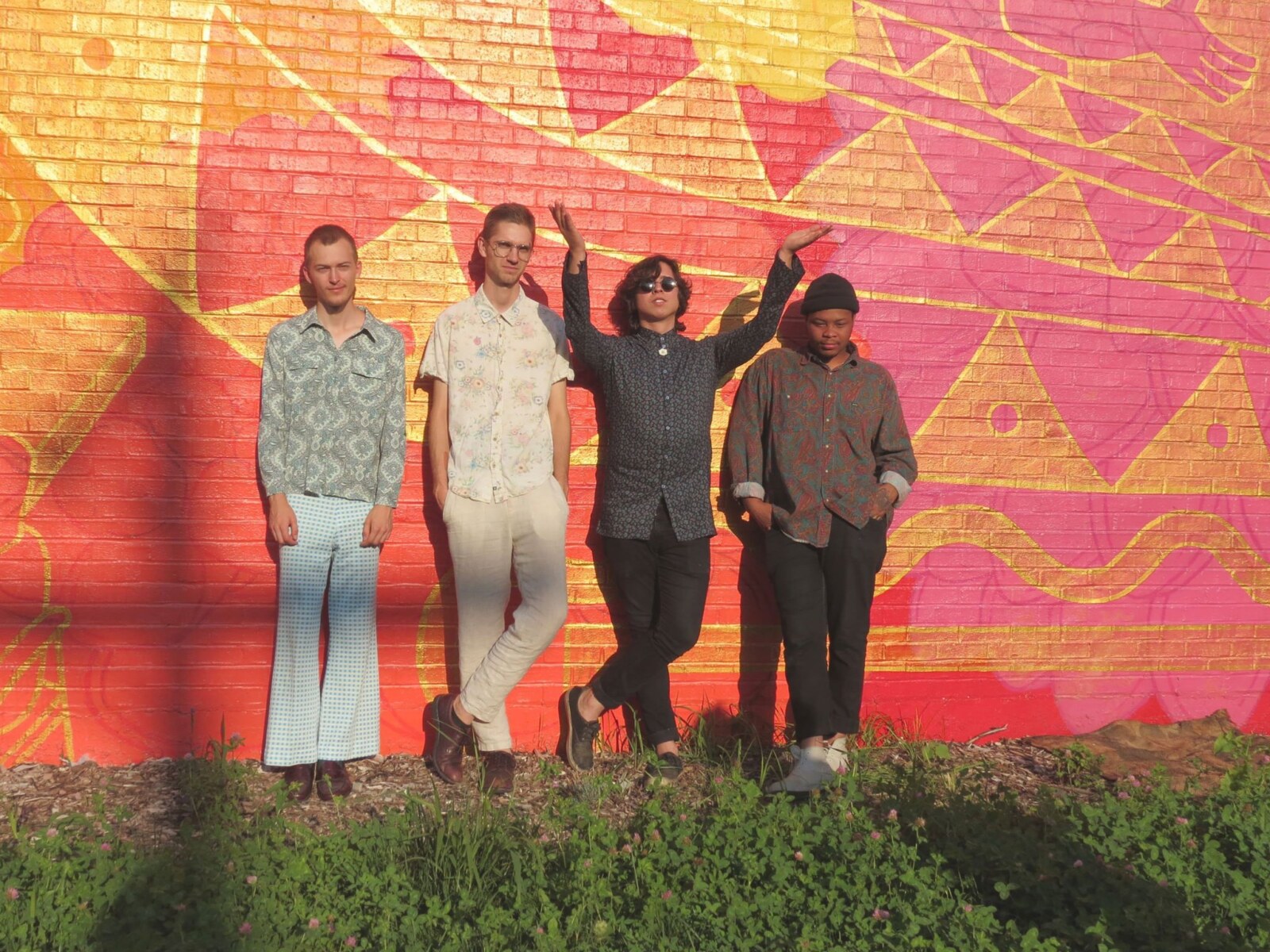 Anyone else behind Daydream Review that you would like to credit?

Elijah: My partner, Kait, is super supportive and I love her very much. She’s a really beautiful singer too, and she actually contributes harmonies on a couple of songs. My parents are always wonderful and encouraging. Paul Cherry, who has mixed a couple of the tunes on the album, has given me some really great advice about music arrangement and composition. But the person who probably has as much of a stake in Daydream Review as I do is my brother Christian. We started writing together long before Daydream started and we still bounce ideas off each other all the time or help each out when we’re stuck on something. He’s also a supernaturally gifted producer; he picked it up at 15 and hasn’t slowed down a bit, now he’s finishing up his degree in music production. He mastered “Looking Glass” and his DNA, so to speak, is kind of embedded in the final version of each track.

Thank you! Any final message for the readers?

Elijah: We hope all of you reading enjoy our tunes! Go listen to “Looking Glass!” Come see us at one of our shows and say hello, we love getting to meet people and talk about music and it always means a lot to talk to people who enjoy what we do. Thank you!