From The Vault: Teenage Fanclub – “Bandwagonesque” (1991)

From The Vault: Teenage Fanclub – “Bandwagonesque” (1991) 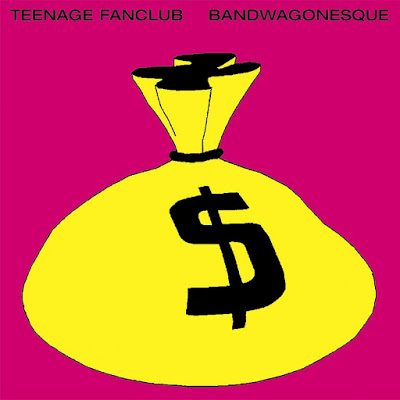 After twenty years, Bandwagonesque certainly needs a second look, not simply a revisionist look, but a critical and influential look. With that in mind, I could easily say something to the effect that Teenage Fanclub are a criminally underrated band who deserve more, though that statement, while perhaps true, is far too open ended and hardly objective.
Bandwagoneesque is arguably a stunning if not beautiful body of work, one that’s nearly perfect, a body of work that has stood the test of time with ease and grace, where Teenage Fanclub have moved from new kids on the music scene to a band who continue to deliver quality material in much the same manner as did Luna and the Sand Pebbles. I say this because while hints of their past still show up on this album, for the most part it is a re-emergence for the band, infused with a loftier sound, more polished, perhaps more mainstream, yet still with an undeniable power and grace, delivering a sonic musical landscape that blurs boundaries and settles in nicely as the record spins on.
It’s only in looking back at this record that it’s able to be defined. Certainly the first words that come to mind are power-pop, though on a deeper dive, one intrinsically understands that Teenage Fanclub embodies their own personal brand of harmony coated lovesick songs delivered as major key rock n’ roll that goes back as far as the Beatles’ single “I Want To Hold Your Hand”. If there’s one aspect that rises above the rest when it come to Teenage Fanclub, it’s that in the end the band seems to have more than a passing association with their music, it’s more that they live within the sound they champion and love.
Yes, like all things, music has its trends, yet as did Luna and the Sand Pebbles, Teenage Fanclub have skillfully managed to have developed a preternatural ability for blocking out what’s current and hip on the music scene, where their visions resound with clarity and purpose, regardless of the date on the calendar. The band have never been the darlings so many music lovers instantly gravitate to, where for undefined reasons, they’ve always come across as possessing humility, all while dishing out pristine harmonies matched by perfect melodies, songs that don’t so much hang in your head as remembered visions, but as records you’re nearly drawn to time and time again for the fluid nature of the music, along with their off kilter lyrics, where Teenage Fanclub can be forgiven anything, as they come across as being entirely unaware of the lines they’re singing or the notes they string together with a sly smile, even as they cascade a rush of endorphins.
While sounding fresh and intoxicating, they’ve always managed to sound retro, though not for the sake of sounding retro, it’s simply that there’s a fluidity created that allows the Fanclub to glide unencumbered, where their reference points become forgotten as the songs roll on, where when making comparisons to say, the Beach Boys, Nirvana or REM, one instantly recognizes that Teenage Fanclub bring something more emancipated to life than the Beach Boys, REM, Nirvana or even Big Star ever managed to. I could suggest many reasons for Fanclub remaining vital (while other bands from the time, say Nirvana, are now nothing more than historical moments in time) and that’s entirely due to the band never making a definitive statement or being defined and locked into a timeframe. Oh yes, I can see so many eyes rolling around in so many heads, along with Kurt Cobain fans covering their ears at such blasphemy, but the truth of the matter is Bandwagonesque has far better production, the guitar riffs are better than anything Nirvana ever laid down, with Kurt Cobain saying, “Listen to Teenage Fanclub, they’re the best band in the world.”
If there’s one line I’d love to keep from my initial review it would be, “I’m sitting here listening in my heavy terry cloth bathrobe and I feel cool as Kim Deal, feeling that I want to do something dangerous.”
*** The Fun Facts: The album cover was designed by Sharon Fitzgerald. When Kiss member Gene Simmons, who had trademarked the logo of a moneybag with dollar symbol, was made aware of the record he sent a letter to Geffen Records, who in turn gave in and sent Simmons a cheque, according to Simmons’s book “Sex Money Kiss”.
– Jenell Kesler
From The VaultJenell KeslerReviewsTeenage Fanclub