Who’s in Naxatras and what do you all play? Have you made any changes to the lineup since you started or is this the original lineup?

John Vagenas: Naxatras is John Delias on the guitar, John Vagenas on the bass and vocals and Kostas Harizanis on the drums. The original line-up featured a second guitar, but that was years back, when we started in 2012. We used to be named Dust at first and then Temple. The names were pretty unoriginal, so when we changed our line-up and became a power trio, we also changed the name to Naxatras.

For me, it was a series of events. The first music I heard consciously was Eminem, still in primary school I think. Then, as the teenagehood started, I found some Nirvana and Scorpions CD’s my sister used to listen to and I really liked that. When my father found out that I liked rock music, he gave me a CD with classic rock stuff, like “House of the Rising Sun”, “Eleanor Rigby”, “Hey Joe”, “Foxy Lady”, “Hotel California” and “Satisfaction”. I was hooked. Then I went to my village for the summer and found out that some of the kids had gotten into metal. They “brainwashed” me for all the time I spent there and, when I got back to my hometown, I went and bought lots of Black Sabbath, Deep Purple, Dio and Iron Maiden CD’s. Then I was a metalhead. I was listening to the Fear of the Dark album at least three times a day! It was a couple of years later that I discovered Pink Floyd. Then it all changed…

Me and John (Delias) met at the Film School of Thessaloniki. It’s a department of the Fine Arts School and that’s where we studied. We met the first week there, started talking about music, like Kyuss, Nightstalker and all these stoner bands and we decided to jam. John was already jamming for years with Kostas, they are childhood friends.

From the first jam we felt it was coming out pretty nice, so we made it into a band. We never played covers, just original material. The first and only time we played a cover was years later, when we covered “Planet Caravan” for a Black Sabbath tribute compilation by the Greek Metal Hammer magazine.

What does the name “Naxatras” refer to in the context of the band name?

Naxatras comes from the word “Nakshatras” that refers to the various phases of the moon in Hindu astrology. It sounded cool and fitting with our music, maybe because of the connections that Hinduism has to psychedelia and spirituality, but we spell it differently because it looks better with an “X”!

There are more than one way that a song can come up. Sometimes we just jam and end up with a more or less complete song, like in “The West” or “Land of Infinite Time”. Some other times someone comes up with a pretty much whole song and everyone fills in their part, like solos, basslines or grooves. This was the case with “Waves” that John brought along, for example, or “Prophet” that I brought along. And in other cases combinations of the two can happen, like, “On the Silver Line”, for instance, where we got inspired by a warm-up riff and groove we played at a rehearsal but the rest of the parts got composed later.

It was recorded, like all of our albums, at Magnetic Fidelity. It’s a studio in rural northern Greece. Jesus I. Agnew is our sound engineer in the studio. Every album we’ve made until now has been recorded in a fully analog way, on reel-to-reel tape (our first one was recorded on cassette, though) and completely live. The only difference with the last one was that the vocals were overdubbed, but all the rest was recorded live in just two-tracks (left and right)! We’ve never made a multi-track recording. It was released by us, no labels involved. We’ve never worked with a label either. All the decisions in the production and release are taken by us. We always release our albums on Bandcamp and stream them on Youtube, Spotify, iTunes and such platforms at the same time. We do have distribution though, by Sound Effect Records, a Greek label. 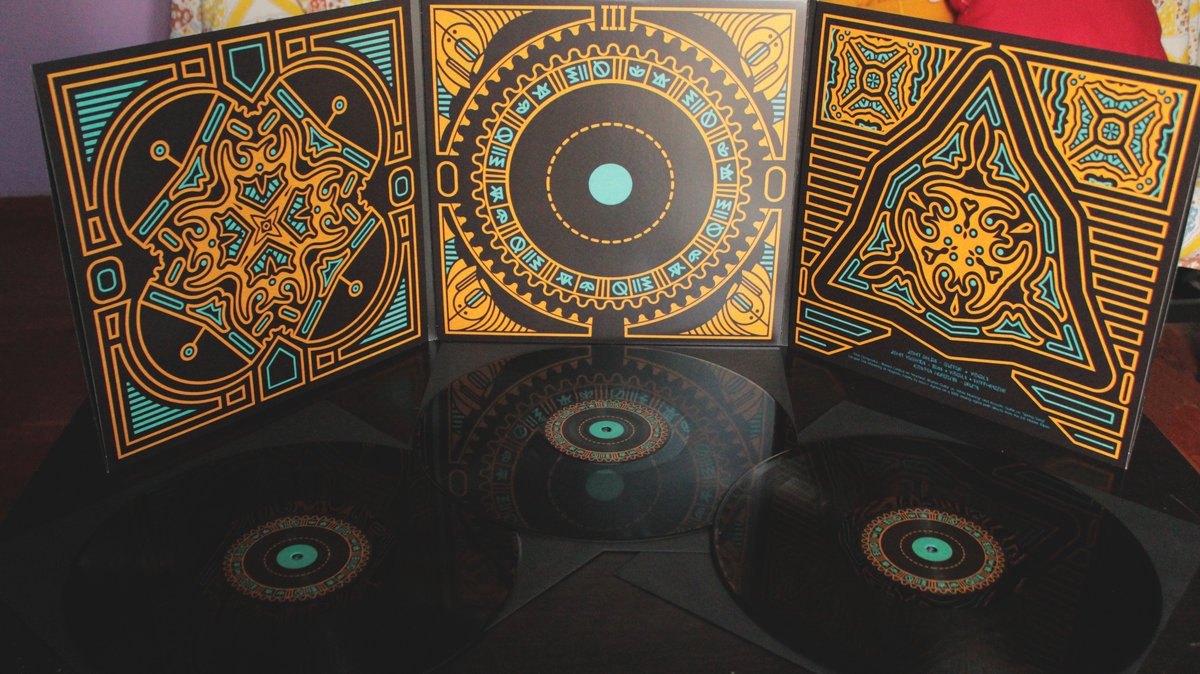 The artwork was made by Chris RW, a very good friend of ours. He’s a great illustrator and we work really well together, he also made the covers for our previous albums. Usually, we throw a general idea on the table at first and then we talk about it and he works his magic until the final artwork is made. We do argue a lot until that point, but it’s a very productive kind of arguing and it’s all for the greater good of the final piece. As the years pass, we understand each other better and we improve the balance between us. 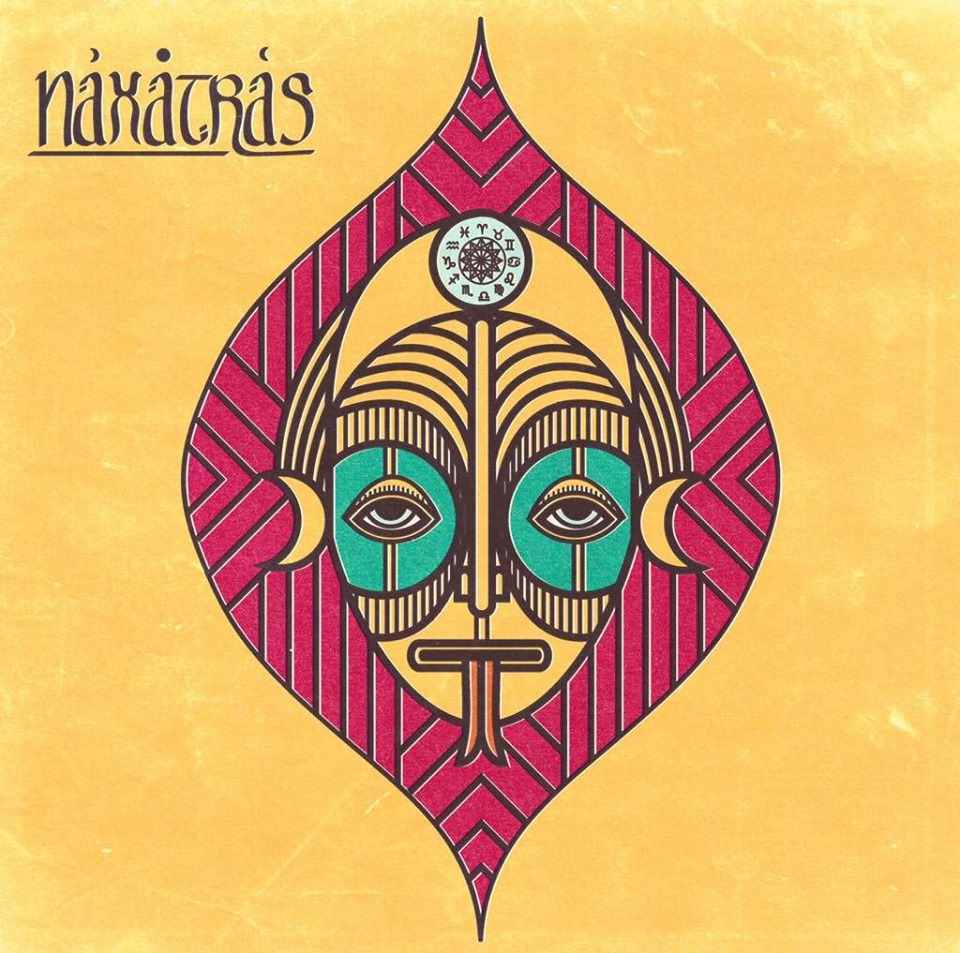 How would you compare your latest release to your self-titled debut and II?

We’ve heard a lot of people saying that III is more like the continuation of the debut album. We tend to agree, the sound and the approach, even the artwork, goes more into that direction but with more focus on the composition, more prog rock references and a slightly darker atmosphere. II is a story on its own, it has the space concept going on, we tried to convey the cold and emptiness of that void we call space. Production-wise, II was recorded direct-to-master, no mixing or mastering afterwards whatsoever, whereas the first and third one received a mastering treatment. But II and III were both recorded on reel-to-reel tape, so that’s a common point. 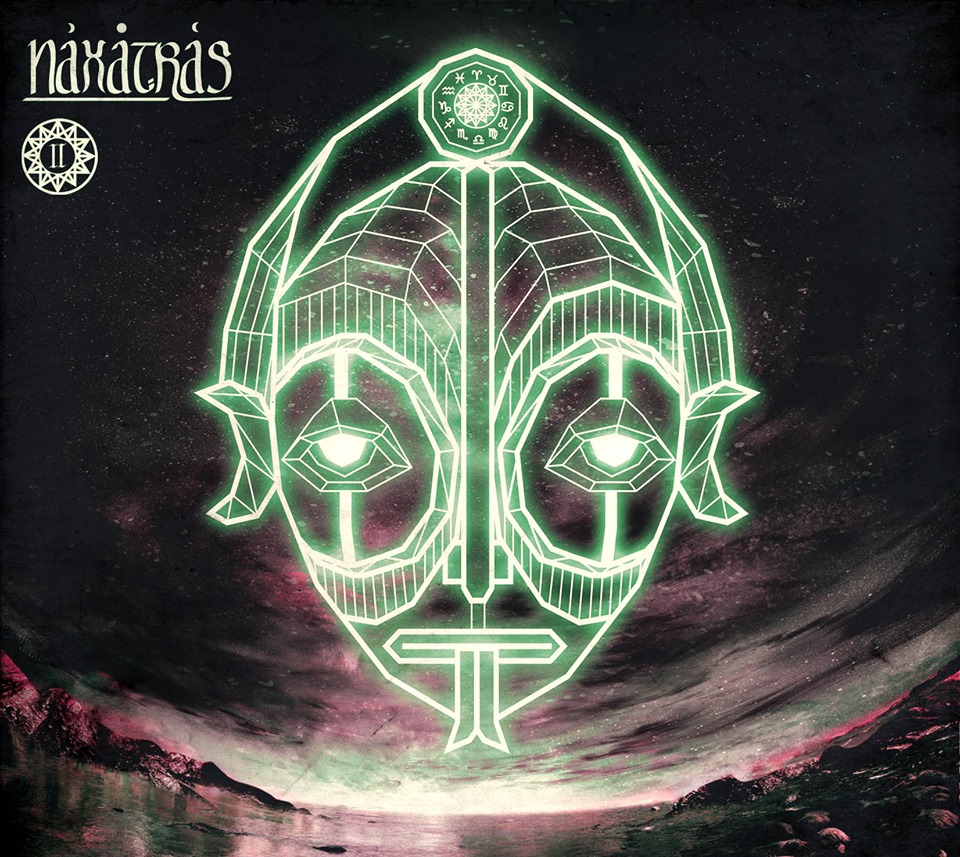 Is there a certain concept behind each album?

On the first album, not really. On II there is a loose concept about space travel, there is a progression from nearer points of the universe to the more distant ones and the two final songs go inwards, instead of outwards. It’s like after reaching the central point of the universe, there is a spiritual experience outside of the concept of time and space. The final song is like a farewell to it all. III has also a loose concept about a journey, but this time there are references to fantasy and maybe a kind of ancient future, like an ancient civilization that used to be very advanced but with mythological aesthetics. First we had the songs and then we arranged them in a way that they describe a journey to another reality, a prophecy and a quest to rebuild the world from the ashes. But whether this all is clearly conveyed or not, I really don’t know!

There’s also an EP from 2016. All of your releases are now available on vinyl, and not just as a regular vinyl, but beautifully packed edition. It sounds really good. What kind of process do you have at mastering material for the release?

All of our vinyl releases have been cut by Jesus I. Agnew, our sound engineer, directly from the master tapes. So it’s a pure analog chain, no digital elements, no computers involved. We try to make the vinyl editions really special, because it is really worth it. Everybody wants their records to be beautiful, as well as good-sounding. More cool stuff is coming too… 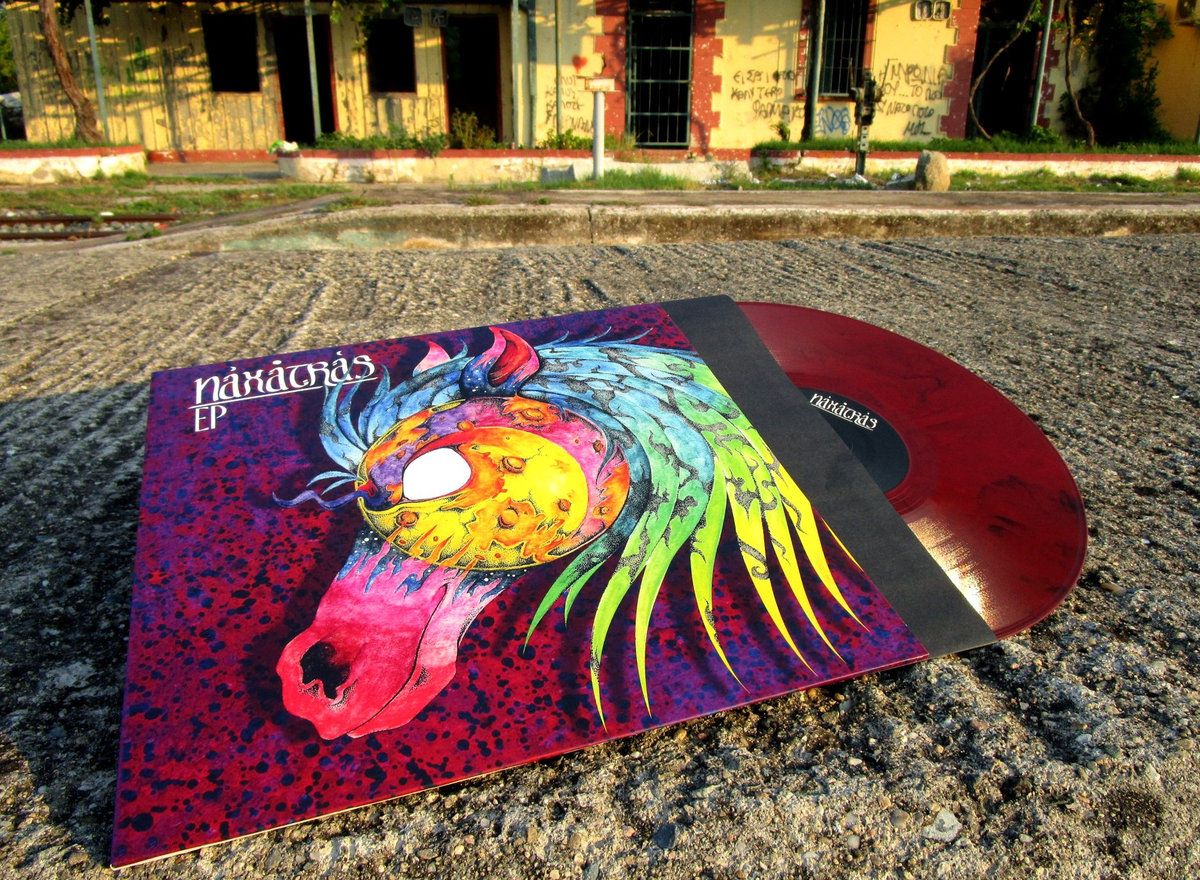 What kind of equipment do you use?

We play with custom instruments (the bass and guitar at least). They’re made by Vagabond, an instrument maker in Thessaloniki. I have a custom made tube amplifier and matching 2×15 cab for bass. The amp is called “Beyonder”. It really sounds exquisite. It is really, really heavy though, so for touring I mostly use a Marshall tube amp with a classic 8×10 Ampeg cab. John played a Fender Deluxe for the recordings, but uses a Marshall Plexi with a matching cab for the guitar now. Kostas has a Ludwig and a Pearl set for the drums. In the recordings we have used other stuff too, a custom-made modular synth made by Jesus, called “Bob”, a custom made theremin, an old organ and a Minibrute analog synthesizer.

Live Rituals at Gagarin 205 was recorded in Athens, at our release show for III. It is our biggest headlining gig until now, there were more than 1000 people there. Greek Metal Hammer urged us to record the whole thing and release it as a free CD with the magazine. At first, we hesitated, but we thought about it and decided that we don’t have anything to lose by it. The actual show was two hours long, we played the whole of III and songs from all our albums as well, but a little more than half of it went into the CD, because of the CD limitations in duration. It is available in digital form on Bandcamp for some months now. 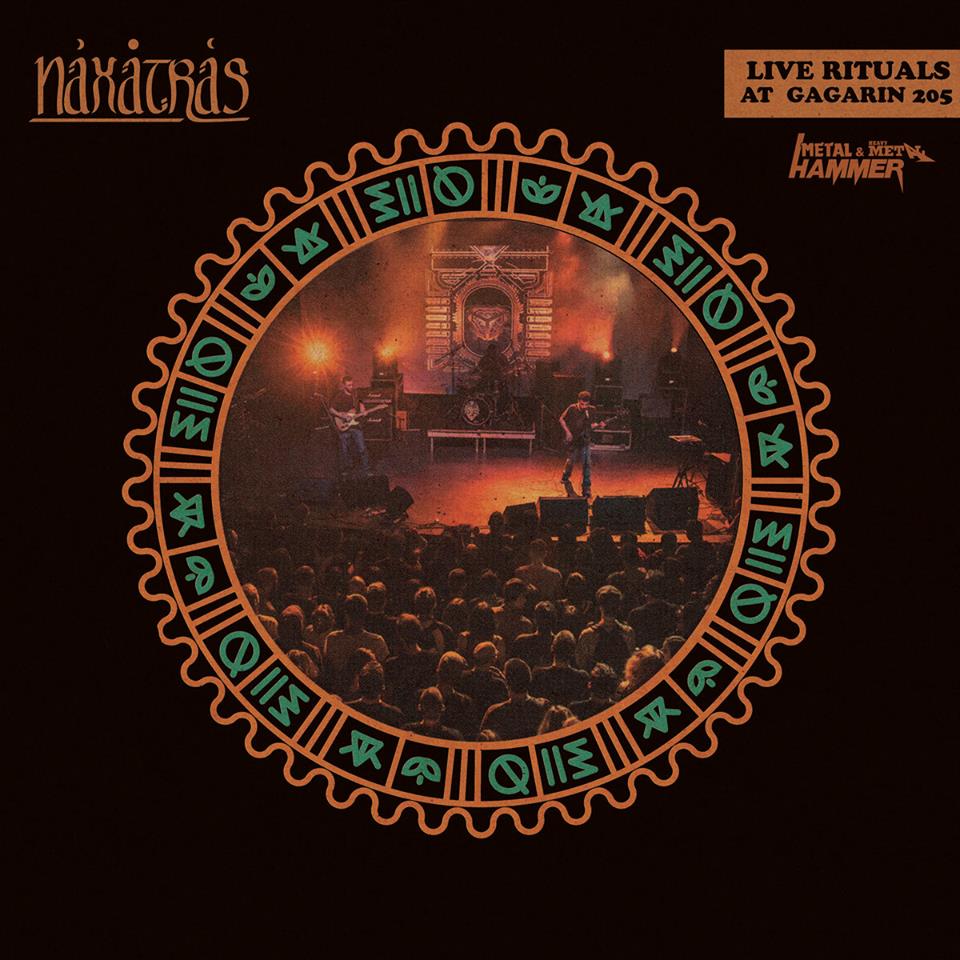 For 2019, we’re going to keep touring for the promotion of III, there are also some really nice festivals coming up, including Desertfest in both Berlin and London. On the same time, we’ll start working on some ideas we have for the next album, preparing the ground mostly. When the touring stops, then we will fully focus on the new material. And then another album, another tour, you know the drill.

Moon Duo for sure, Föllakzoid, Atomic Bitchwax, My Sleeping Karma, Elder, 1000mods, Child, Earthless and loads of others that I can’t remember right now!

We are huge Pink Floyd fans, so all the classic Floyd albums would go in here for all of us. Argus by Wishbone Ash, Funkadelic by Funkadelic and Kind of Blue by Miles Davis also. There are many great bands nowadays too, the most recent albums by All Them Witches, Orb, The Babe Rainbow and Kikagaku Moyo are great. Khruangbin is an excellent band too.

Thank you so much for this interview and for all your kind words about our records! Our love goes to the people who have supported us these years, beautiful things are coming, stay tuned!