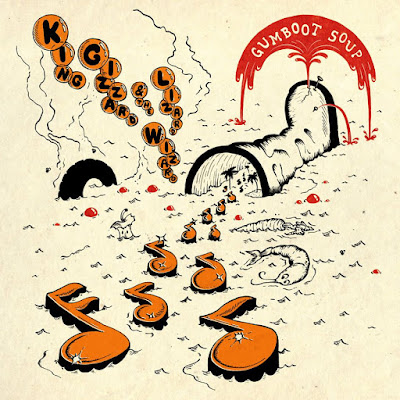 King Gizzard & The Lizard Wizard – Gumboot Soup (Flightless Records, 2017)
https://kinggizzard.bandcamp.com/album/gumboot-soup
Keeping the promise to their fans to release five albums in 2017, the Lizards snuck this one in under the wire on New Year’s Eve! But the Lizards are not anything if not prolific – this is their 13th full length in a little over six years, so fans have a lot to chew on and newbies have a lot of catching up to do. Luckily, the band are proficient songwriters and the septet which sometimes feels more like a commune than a rock band focus on quality, not quantity. So don’t go fearing this is just a collection of B-sides and flotsam and jetsam that was scraped off the cutting room floor to meet their remit. No, this is as strong a collection as anything these space cadets have released, suggesting without any doubt that they are at the top of the Australian psych scene.
‘Beginner’s Luck’ is sultry, Pepper-esque pop, ‘Barefoot Desert’ is giddy, playful nonsense with a wonderful, childlike innocence at its heart, and the experimental jazzy flickerings of ‘Superposition’ (complete with broken tape coda!) add that typical King Lizzard kitchen sink variety to
The band expand into funky Talking Heads-meets-Funkadelic territory with a touch of the Dead’s bopping ‘Shakedown Street’ shuffle on the effervescent ‘Down The Sink’, although the glammy, Rammstein-ish industrialised metallic stomp of ‘The Great Chain of Being’ is rather out of place in these usually sedate surroundings. Elephant Six fans of acts like Neutral Milk Hotel and Olivia Control will enjoy the bubbly, Beach Boys-y fluff of ‘The Last Oasis’, and the spacey froth of floating ‘The Wheel’ (not a Garcia cover!) lifts us off to frilly flights of fancy amongst the galaxies far, far away!
Recommended to fans of everyone from Asteroid No. 4, Anton Barbeau, Robyn Hitchcock and Brian Jonestown Massacre to the Oh Sees, Phish, Flaming Lips, and Ty Segall – a great variety, indeed and wonderful company for music fans of the myriad genres the Lizards explore with great success.
– Jeff Penczak
© Copyright http://www.psychedelicbabymag.com/2018
Jeff PenczakKing Gizzard & The Lizard WizardReviews