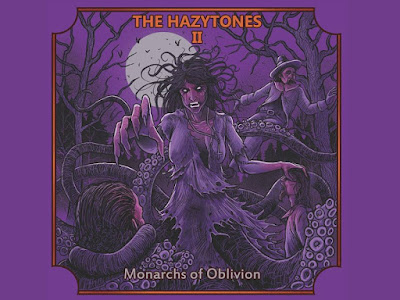 The Hazytones – II: Monarchs Of Oblivion (Ripple Music, 2018)
The Hazytones, a trio from Montreal, have, on October 5th, and in conjunction with Ripple Music, released their newest collection of songs. II – Monarchs Of Oblivion is the first album I’ve heard from the band, and, for the sake of fresh ears, I chose to dive into it without going back to their earlier work. That being said, this is a groove filled, fuzzed out, killer record, and a great intro to the band for new listeners.
Hell, the second track, begins with a really sweet, groovy riff. For the verses, they palm mute that same part for added power, but open it up as the section moves on. I really dig the slow tempo they use before the solo, it’s got a great heavy feel; plus, it leads up to the guitar solo nicely.
Just from the first two tracks, I could already tell that I really liked their guitar tone, bass as well. But the tone in the beginning of “The Great Illusion” topped it, and showed that they aren’t going to rely on the same tone for every part. This song, and some of you will hate me for it, has a Ghost sound in the vocals; especially in the chorus where even the music takes on that feel; it’s like if Ghost was heavier, and fuzzier. At 4:20, the slow tempo, the rhythm guitar, and then the colliding solo are all awesome; that slow groove is excellent, as are the space-y effects going on under it. I also liked the diverse sounds the vocals use, it all helps to make this is a killer track.
“Monarchs Of Oblivion Part 1” is another excellent example of what this band can do. When the full bands enters, the groove is unmistakable, and there is, once again, a slight Tobias Forge tone vocally; mostly in the verses. The mid section has, what sounds like a saxophone underneath the mix, which, if it is what I think, is pretty fucking cool. The arrangement of this tune is also very well done, nothing sounds forced, or out of context. This leads right into “Monarchs Of Oblivion Part 2”, with no breaks between killer guitar parts.
Part 2 is equally as good as its predecessor, with groove, diversity, and absolutely kick ass guitar parts.
One of the aspects of this group that they are a trio. I love to be able to have the bass stand out during lead sections, as the bass on this album is fantastic; there’s some really stellar playing that locks onto the drummer so tightly!!
Obviously, I liked this album quite a bit. I’m thinking that many of you will too, and I urge you to give this band a listen; it’s well worth the time. Fans of stoner, doom, and psych, as there are some psych elements throughout this record, should all find something here to love! Enjoy!!!
– Tom Hanno
© Copyright http://www.psychedelicbabymag.com/2018
ReviewsThe HazytonesTom Hanno