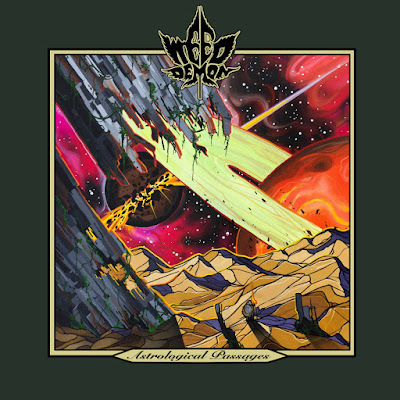 Weed Demon – Astrological Passages (Electric Valley Records, 2018)
https://smokeweeddemon.bandcamp.com/album/astrological-passages
This is a very intense record from Columbus, Ohio based quartet Weed Demon. Their first release Stoned To Death is from 2015 and you can also hear it on bandcamp. The band has evolved quite a bit since then, though. Astrological Passages features five intensive stoner doom tracks.

The album starts things off with a powerful track and ultra intense in-your-face vocals (drove my dogs out of the room). Powerful riffs and hypnotic stoned stuff. At around six minutes, the mood changes for a brief period with some nice effected guitar and then the power doom slowly grows as the vocal returns again. “Sigil Of The Black Moon” starts with some horror film soundtrack and then slowly builds on a simple guitar and bass line. Ominous to start and then the vocal and more heavy guitar kicks in. The riff is very familiar but I can not place it?! Anyway, the track gets very hypnotic and repetitive for several minutes and then at around five minutes in, we get the first guitar solo of the album, with a nice slow bluesy stoned feel. The doomy sound is very spaced out at the end of this track yet also traditional. Great track. Quite psychedelic actually. “Primordial Genocide” kicks in as super heavy and doomy. At times the vocal is a bit like Sons Of Otis. Three mins in and the guitar becomes clean and a new melodic section begins which takes you to a totally different place. By 5:30, it is gaining in intensity again with the main riff returning but also a spaced out guitar on top. Psyched out. A bit like Dark Buddha Rising at times. “Dominion Of Oblivion” reminds me a bit of Bong meets Sleep. “Jettisoned” is an instrumental track with melodic effected guitar over the top. This track builds up and is by far the most rocking on the album and has a surprising acoustic ending. Nice. Intense record. Wow. Check it out.
– Scott Heller
© Copyright http://www.psychedelicbabymag.com/2018
ReviewsScott HellerWeed Demon