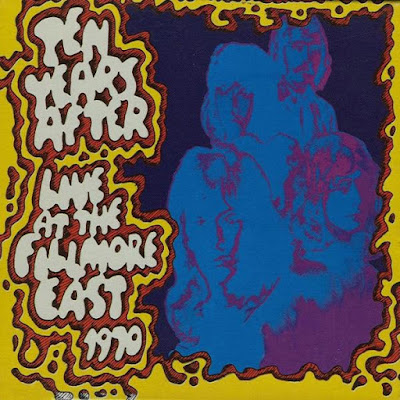 Ten Years After – Live at the Fillmore East 1970 (Pledge Music, 2018)
Another vinyl experience that shouldn’t be missed …
Ten Years After were relentless, proving for all time that they were perhaps the most wondrous live band walking the planet, with this being their fourth, and best, live outing in what was then a rather short career.
Of course music fans wanted slick clean studio material, though those same fans quickly learned that hearing Ten Years After in a live setting was the only way one should experience this band, where they played like a rock jazz band, swapping leads, trading grooves, soloing to the sky, delivering the most electrifying sets of all time with a fine blend of boogie blues and rock that demanded your attention, leaving listeners breathless, where Ten Years After could easily stand note for note and chord for chord with any of the better known bands of the day, and that includes Jimi Hendrix.
You wanna know what the 60’s sounded like … this is the place to hear it all, and all from a venue that offered the best sound system and soundboard of the day. The vinyl has been remastered and released for the very first time as a limited edition three record set taken from the original 1969 quarter inch master tape using a Studer A80 Tape Machine, with the music being cut on a Neumann VMS 80 with a SX74 Cutter Head, where I found hearing this presentation to be hands down the finest sonically produced version available.
– Jenell Kesler
© Copyright http://www.psychedelicbabymag.com/2018
Jenell KeslerReviewsTen Years After