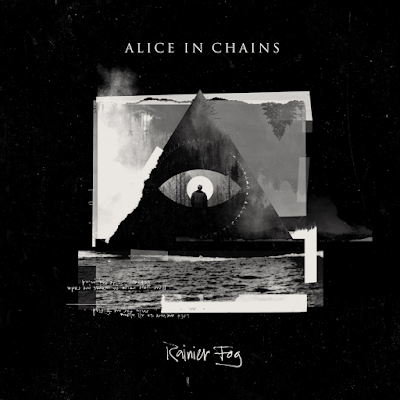 Alice In Chains – Rainier Fog (BMG Rights Management LLC)
Ok, here we go. Alice In Chains. In 2018. Their first album in half a decade. It’s a bit daunting to review a group that’s had such a dramatic impact on my life, a group that seems to pull their sound up from a deep pulsating void that escapes so many artists. Their bellowing vocal harmonies ooze from the jagged lips of a rusted beer can. The notes that cascade off their guitars apprehend the authority of primordial legend. No doubt they’re not everyone’s cup of tea. But hey, I’m not writing this for them.
After having released several singles off the new album to garner attention, Rainier Fog finally hit the streets last week. I remember my phone lighting up with the notification, and I have to admit—like we all do, I wanted so badly for it to shred my expectations and give me something special. I wanted to know that the kings of grunge could make a serious comeback, just as you’re probably secretly wishing now.
Well, the results are in. While the record isn’t any religious artifact, it certainly stays true to the group’s heart and soul. They show up with their full arsenal—begrudging laments, infernal riffs, and distortion stretching a quarter mile. “The One You Know,” the opening track and one of the pre-released singles, kicks right into gear with a floored engine. The lugubrious chorus with its eventual modulation is polished, bite-size, and keeps in rigorous tradition with classics like “Godsmack” and “Man In The Box.”
A few rays of sun peak through on “Fly” and I’m taken back to Jar of Flies. The acoustic fingerpicking has that same flare of contrast to prove the release capable of not just power but variety as well. The mounting solo ambushes us like a torrent, only to coalesce into a harmony with the vocals. The coordination is a true testament to metal’s potential as a medium.
Alice in Chains’s vocal prowess is also fully present, just as it was in 1992. The ironically titled “Drone” offers an almost tender opening verse of layered vocals. The energy climbs and falls, blossoms and caves, all the while followed by a sluggish bass line whipping the melody into formation. “So Far Under” is another return to the familiar, guided by a singular and predictably overpowered riff. I survive on the scraps you don’t burn / Maybe love’s something I’ll never learn / This whole house of cards crumbling slow / If I disappear would you even know. Sludge metal at its finest.
The curtains close with “All I Am,” a slow and steady hike up a mountainside lasting over seven minutes. Presumably intended as Rainier Fog’s final burst of sparks, I’m left underwhelmed when I think of where we just came from. The interludes of intimate instrumentation are a sweet and dynamic touch, and the drifting reverb is concise in its function. But am I bewildered by the possibility of an epic grunge-revival? You can guess my answer. It’s a quality release, but will no doubt be easily forgotten.
– Gabe Kahan
© Copyright http://www.psychedelicbabymag.com/2018
Alice In ChainsGabe KahanReviews