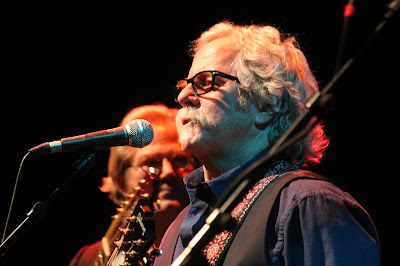 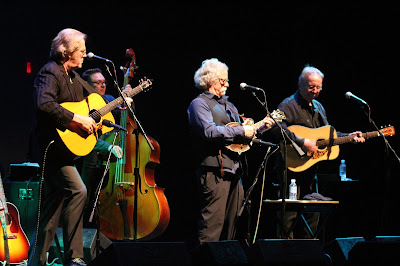 (l to r: John Jorgenson, Chris Hillman, Herb Pedersen, and, in the back–on upright bass– Mark Fain)
© Pam Baumgardner
Among the highlights were the killer cover of The Everly Brothers’s song “Walk Right Back” — on which Jorgenson slayed with his Django Reinhardt style jazz-manouche solo; The Dillards’s songs “Hey Boys,” “She Sang Hymns Out Of Tune” (appropriately featuring Pederesen on lead vocals, as he had been a member of The Dillards during the ‘60s), and Pedersen’s haunting gem “Wait A Minute.” The trio also performed Buck Owens’s “Together Again;” and The Louvin Brothers’s “If I Could Only Win Your Love.” Diving into their back pages, Hillman and company played “Love Reunited”–which had been a hit for them in the ‘80s when they were in The Desert Rose Band together; and also The Flying Burrito Brothers’s classic “Sin City” — which Hillman and maverick genius Gram Parsons wrote together in their wild and woolly post-Byrds youth. 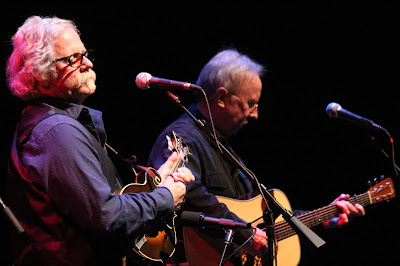 (l to r: Chris Hillman, Herb Pedersen)
© Pam Baumgardner
The splendid new material–which featured Hillman’s great lead vocals — included “Bidin’ My Time,” “Given All I Can See,” “When I Get A Little Money,” “Such Is The World We Live In,” “Different Rivers,” and “Restless” — the later two featuring Jorgenson on piano. A moving tribute to the late, great Tom Petty (who co-produced and played on Hillman’s new album), via a cover of his beautiful song “Wildflowers,” was also performed. For Byrds fans, the “wow” moment happened when David Crosby made the scene, casually strode on stage with an impish smile and sang “Turn, Turn, Turn” with Chris and the boys. This elicited wild cheers from an appreciative audience which resonated to the closing lines of that pivotal ’60s song: “A time for peace/I swear it’s not too late.”Other Byrds’s songs Chris, Herb, and John played included “The Bells of Rhymney,” an extended, psychedelic-bluegrass jam of “Eight Miles High,” and the Gene Clark-penned beauts “She Don’t Care About Time,” and “Set You Free This Time”– on which John sang a soulful lead vocal. The Chris Hillman/Roger McGuinn co-composition “Here She Comes Again” — with its early Beatles/Byrds feelgood vibe, rounded out the amazing set — after which the artists encored with a superb cover of The Stanley Brothers’s “Rank Stranger.” 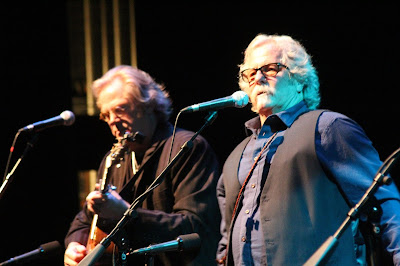 (l to r: John Jorgenson, Chris Hillman)
© Pam Baumgardner
All in all, it was a wonderful evening’s entertainment gifted to us by master musicians with rich legacies and open hearts to the Ventura and Santa Barbara communities.