“We prided ourselves on being loud, hard and not giving a shit”

I recently moved to Portugal and have become friends with an amazing guy named Martin Weaver. Martin is best known for his band Wicked Lady. They were a wild UK band that existed in one form or another from about 1968 to 1972. While there is almost none of photo material or recordings available, the band did make some recordings in their basement rehearsals. According to Martin, nearly all of the photos claiming to be Wicked Lady on the internet were actually when they were playing with a band called Dark. The band’s name is not from the movie but comes from a pub drink that was sold at that time in the UK. Today, only Martin Weaver, the guitar player and singer is alive to tell the stories about Wicked Lady!

Wicked Lady was a hard rock, has been called a proto metal, band based in Northamptonshire. We prided ourselves on being loud, hard and not giving a shit.

We were a jam band at heart, our greatest enjoyment was jamming around set song structures. Jams would continue until a natural end became obvious. The tracks on the two record releases The ‘Axeman Cometh’ and ‘Psychotic Overkill’ are the basic songs, recorded in order to settle arguments about how the songs went, not intended for release, we were against recording, it always sounded lame and soulless compared to a band’s live sound. The albums were first released on Kissing Spell label on CD in 1992 and later Guerssen from Spain released CD and vinyl. A vinyl originating from Sweden called ‘Blow Your Mind’ featuring a naked biker girl on the cover is a compilation and highly sought after by collectors. 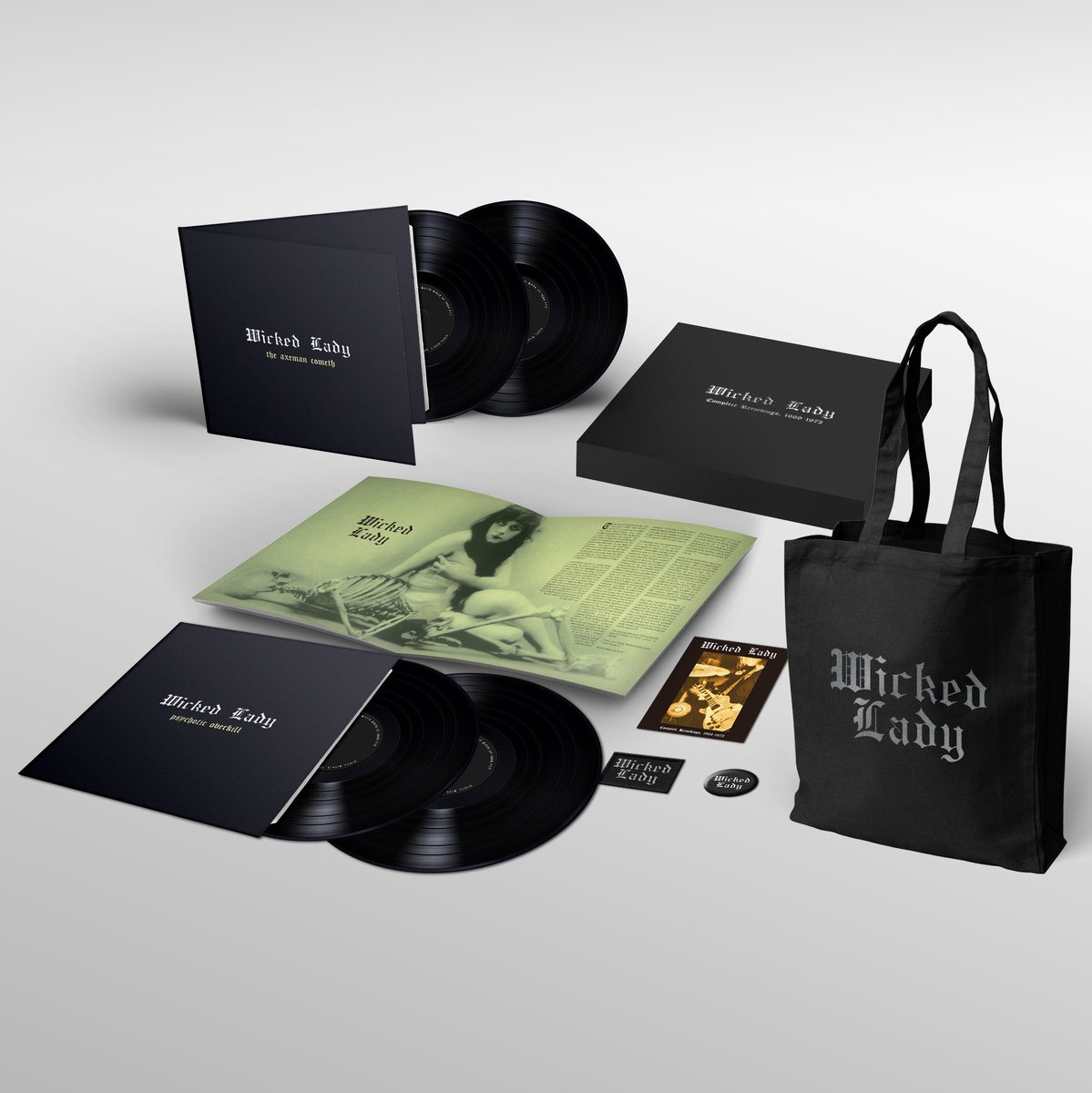 We first rehearsed in Daventry town centre, getting a following of bikers who followed us to gigs and at several places took control of the door. One pub in Northamptonshire lost its music license following a mini riot in the street outside the venue, the police were called by neighbors because of the noise of the band and fighting ensued police and neighbors vs Bikers, needless to say we didn’t get paid! We did play some well known places such as the Roundhouse and Marquee Club but we found that the more high profile the venue, the less we got paid. I don’t remember getting paid at all in London, then as now unknown bands were expected to play for free ‘for the good of your career’- at least we didn’t pay to play as some bands do today.

“Performances would usually end with the drums being kicked over and guitars left on stage feeding back till someone killed the power, Who style”

The trouble for us was that the further we had to travel the more time we had to drink in the van on the way. Not good for a good stage performance especially when mixed with other chemicals! Sometimes we were great, sometimes not so great. Mostly we played on the pub circuit, which was our bread and butter. Performances would usually end with the drums being kicked over and guitars left on stage feeding back till someone killed the power, Who style. I remember playing at a large pub in Northampton, The Romany. I played just one chord and the room starting to clear, everyone escaping the noise. We played our set to a few hardy souls and after playing we went to the Lounge for a drink. The room was packed and as we walked in a worried man said ‘I hope you’re not going to play in here now are you?’ I don’t think the midlands audience was ready for free form heavy rock! Most bands were either cover bands or blues bands then and not many people got what we were doing. Our favourite place to stop after gigs was the Blue Boar on the M1 motorway where you would rub shoulders and swap stories with other bands, famous and unknown alike enjoying a full English at some ungodly hour of the morning. A lot of useful contacts were made there in the late 60’s and 70’s.

Many band’s sole aim was to get a recording contract and we did have an A&R man come to see us play, we weren’t really interested and it ended badly for him when he insulted my girlfriend. No contract for us! It was just a chance conversation with Kissing Spell in ‘92 in which I was asked if I had been in any other bands and I sent them the tapes of Wicked Lady, I didn’t think they would be interested in this forgotten band but they were and now 40+ years on we have a record release and fans worldwide.

I am the last man standing from the band. I did see ‘Mad’ Dick Smith Drums at an Iron Maiden gig 30 years ago but he was so far out of it then he didn’t know who I was

What was the real Wicked Lady gig like? According to Martin, you never really knew what you were going to get as the band was usually pretty ripped and just cranked up the amps as loud as they could and play a few riffs from a song and then just jammed. He remembers a gig where they jammed out a song for 90 minutes! The band played with loads of bands including the Pink Fairies (see list below). They played famous places like the Marquee, but rarely did they ever get invited back to play again due to either being brutally loud or just too wild and crazy.

While Wicked Lady were still going, Martin was involved with another band called Dark. They were primarily the band of Steve Giles but Martin came in as second guitarist and not the lead guitarist as is often reported. In fact, Martin only played one solo on Round The Edges, just at the end of the track “Live For Today,” a raucous unhinged solo that is possibly his favorite solo he ever recorded! Their debut album, which was originally pressed on only about 60 copies, is one of the rarest and sought after vinyl records from the 1970s and sells for big money. Kissing Spell, who released the two Wicked Lady CDs also released 4 albums by Dark on CD. The original Dark, Round The Edges (but just called Dark on Kissing Spell), Teenage Angst, Anonymous Days, and The Jam. There is also a DVD from the 1997 celebrating their 25th anniversary reunion show. The band also reunited and played live in 2011. The band members are still friends and speak and sometimes meet-rehearse but no new albums or gigs are planned.

Besides music, Martin is also a forensic anthropologist and electrician, who has built his own guitar pedals and guitars. He also plays keyboards and for a while in the 1990s made electronic inspired music like Timeshard, Banco da Gaia, and Eat Static.

I got into electronic music in about 1971. I was asked to join Dark as a synth player and turned up at the audition with a massive synthesizer that I built myself, it took three of us to get it down to Dark’s rehearsal cellar. The damn thing wouldn’t make a sound but they knew I played guitar as well and they accepted me in as second guitar player. I never did play the synth for them but did support them once at a gig as a solo artist in maybe 1972. I started doing solo gigs when Dark finished in 1973. I played what we would now call ambient music but then we called it head music. I joined a few bands of little note as a guitarist through the rest of the 70’s and 80’s and in the 90’s I started producing electronic music again as a sideline to Dark, it was for my own enjoyment really, a hobby. I sold a few tracks here and there for compilations but never under my name, I used a different name for every track (tax avoidance).

Under what name is your electronic music published?

One name I used was Seadog.

Is there any chance to hear more music by Dark?

It’s unlikely any more music will come from Dark, the old line up anyway. Steve Giles has drafted in a new bassist and guitarist and still does the odd gig. The last recording we did in 2015 was an EP called Welcome To The Edge, we re-recorded some tracks written by Steve from the very early days of Dark and never recorded properly. This is available from Darkedge Records. 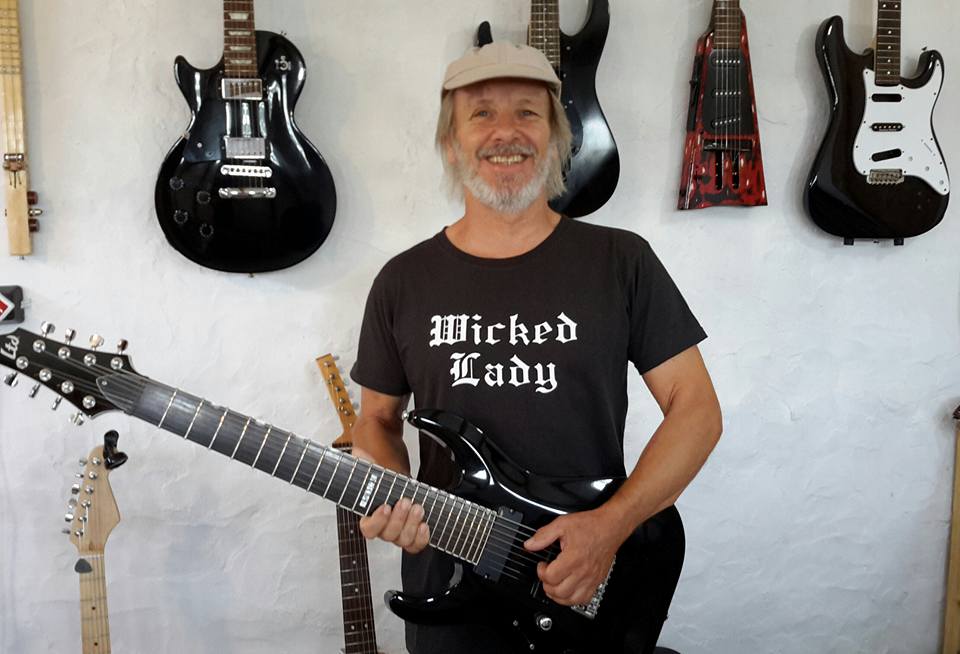 What are you up to musically these days?

I am now just making music for my YouTube channel.

I played a few gigs solo in Bulgaria doing some of the YouTube tracks and a few Wicked Lady tunes but since moving to Portugal I haven’t done anything yet.