Following exactly the same format as for The Two-Volume Tapestry of Delights and A Melange Of Musical Pipedreams And Pandemonium, Vernon covers Latin American and Canadian rock, pop, beat, R&B, folk, garage, psych and prog between 1963 and 1976 in this latest volume.

Hi Vernon,
Congratulations on your newest work “A Potpourri Of Melodies And Mayhem” and thank you for taking the time to answer a few questions for our It’s Psychedelic Baby Magazine readers.

Your newest title is the second installment of your previous book “Dreams Fantasies And Nightmares From Far Away Lands Revisited” and surveys music from Latin America and Canada. How did you select the new title and what is its significance?

I thought of the titles for both the ‘Melange of Musical Pipedreams and Pandemonium’ and ‘A Potpourri of Melodies and Mayhem’ books when I was lying the sun relaxing on holiday in Uruguay back in February 2015. Living in a country like England that is largely starved of sunshine for much of the year, I have always really appreciated sunshine and I get a lot of my best ideas when I’m lying in the sun relaxing!

I view these titles as part of a series also incorporating ‘Fuzz Acid And Flowers: A Comprehensive Guide to American Garage, Psychedelic and Hippie Rock 1963-1977’ (2010) and the ‘Two-Volume Tapestry of Delights: The Ultimate Guide to UK Rock & Pop of the Beat, R&B, Psychedelic and Progressive Eras 1963-1976’ (2014).

“Potpourri” includes entries for bands from Latin America. How was information contained in these entries obtained? What difficulties, if any, did translating the languages present?

I have quite a lot of Latin American records and CDs in my collection, but youtube was an important resource for getting to hear the music I don’t have. The language barrier was an issue and meant the book took a long time to write. I wanted the song titles translated into English to make them more accessible and meaningful to my readers. A Brazilian friend of mine kindly handled all of the Latin American translations.

Is “Potpourri” a limited edition publication like its mate “A Melange Of Musical Pipedreams And Pandemonium” that covered bands from Australia, New Zealand, Africa, Turkey and The Middle East was? If so, how many copies were printed?

Yes, after allowing for various complimentary copies there are around 850 copies of ‘A Potpourri of Melodies and Mayhem’ for sale. It is very unlikely that there will be any further editions of this book so if you would like a copy now is the time to buy it. You would not believe the regular volume of emails I get requesting titles that are now out of print (like ‘Fuzz Acid and Flowers’ for example), which can only be obtained for inflated prices on ebay and the like! Like records, it is always much cheaper to buy these books whilst they are in print!

For readers not familiar, would you please describe the information contained in individual band entries and how you arrived at what information to be included?

The content of each entry has been derived at from a combination of what I believe music fans will want to know and feedback from readers over the years. There are detailed album, EP and 45 discographies (including reissues and overseas issues) and albums and EPs each have a rarity rating, where applicable. Each entry also includes details of retrospective compilations and appearances on various artists’ compilations. Most entries contain bibliographical details and descriptions and critiques of the music in as much detail as possible. In this latest series of books far more emphasis has been placed on listening to, describing and providing constructive critiques of the music than was the case with earlier editions. This is an area I have been particularly focusing on with ‘The Two-Volume Tapestry’, ‘Melange’ and ‘Potpourri’. 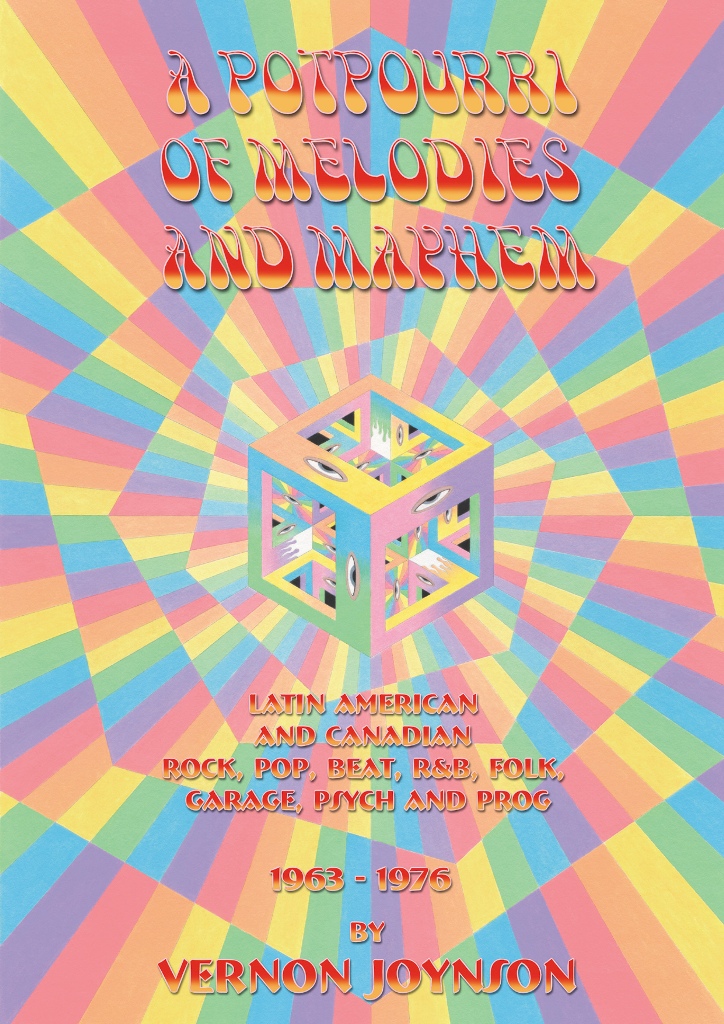 The book’s scope is even wider than the title suggests with some other genres, such as jazz and rock-soul, partly covered too. Where artists have been active since 1976, most entries include information on their post-1976 careers up until going to press and there’s also a Stop Press section featuring details of the latest reissues and other relevant info.

Does “Potpourri” follow the format of “Melange” and your expanded 2014 two volume edition of “The Tapestry Of Delights?” What, if any, are the differences in formatting?

The formatting is exactly the same as I used for the ‘Two-Volume Tapestry of Delights’ and ‘Melange of Musical Pipedreams and Pandemonium’.

Where and how can our readers obtain copies of this new title? What is the retail cost? Should our readers expect to pay full retail price, or to your knowledge are copies available at discounted prices?

Although the retail price is £55 there are some online outlets selling the book at a discount. I’ve had a quick look on the web on the Amazon marketplace and the best price I can find is Books Etc (£31.50 plus £2.80 post, but UK-only). Next best is The Book Depository £37.14 (free UK delivery) and Books Please £43.54 (free UK delivery). When they have stock Speedy Hen is usually a cheap outlet too.

All your previous titles include beautiful full color sections containing photos of album artwork. Is this the case with “Potpourri” as well? If so, how did you obtain the photos?

Yes there is a 12-page colour section using illustrations from the archive Borderline Productions has built up over a number of years.

The book is published under your name, but are there any people in particular that you would like to give a special shout out to regarding the new publication?

Yes for the Spanish and Portuguese translation Nathalie Angelo Pimenta and for some of the French translation in the Canadian section Katinka Pinnock. Mike Warth and Nick Warburton have contributed additional entries. Clark Faville has helped with quality controlling the text and has provided the rarity ratings. Ivor Trueman has done the graphics and artwork and the front cover is taken from a painting titled ‘Colour Phase’ by Andrew Linsell (2015). The full list of credits appears in the book’s foreword.

As always, I am sure there are questions I have failed to pose to you. If so, what are they and what would you like our readers to know in their regards?

I think you’ve covered everything, Kevin. Thank you. I would simply emphasise that it’s very unlikely that ‘The Two-Volume Tapestry’, ‘Melange’ and ‘Potpourri’ will ever be updated again so if you want copies it is much cheaper to buy them now whilst they are still in print.

Thank you so much for taking the time to answer these questions for It’s Psychedelic Baby Magazine readers. Having received and read “Potpourri” I know I join our owner/editor Klemen Breznikar in congratulating you on the new title and thank you for your tremendous contributions in documenting the wonderful music recorded from 1963 to 1976.