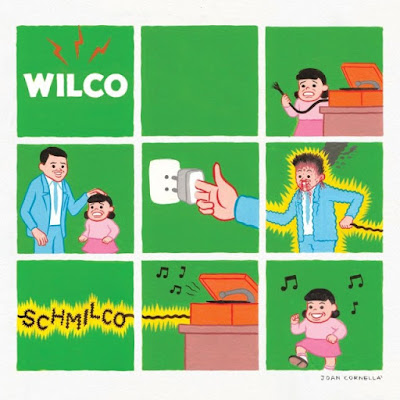 Wilco – Schmilco (dBpm Records, 2016)
Watch out, here they come again with an album you’re either gonna love, hate, or if you’re like this reviewer, you’re gonna take the songs that speak to you and add them to an ever growing collection of Wilco numbers that shine.  By shine I mean that Wilco is one of those bands who put out a splendid amount of sensational tracks, but never seem to find their way when it comes to putting together one flawless album of undeniable material.  With that being said, I will suggest that all of the material found on Schmilco will sound amazing when presented live, and therein lies my dilemma with Jeff Tweedy and his merry band of gunslingers … what I hear during a show is not what I want to hear when I drop a record onto my turntable.  Now, I’m more than sure that there are those out there who will praise this album to the high heavens, giving it no less than five stars, and sincerely, I’m glad those people are out there walking the planet, because without them, I would miss the four or five tracks off of each album that thrill me no end.
Listening to the album, one can not help being conflicted, as Tweedy’s undertaking seems to be aimed at a lot of people and things that piss him off, or have escaped his grasp of understanding … and I don’t know about you, but I rather tire of listening to my friends complain all the time, yet alone purchasing an album that takes aim at Jeff’s pet peeves … though in all honesty, he does seem to enjoy his bit of neurotic high octane darkness.
In all manners Schmilco is an absolute extension of Star Wars (dBpm Records, 2015), and I for one would like to see the band concentrate on songs such as “If Ever I Was A Child,” “Cry All Day,” and “We Aren’t The World (Safety Girl),” songs that feature the band’s innate ability to deliver pure fuzzed out alternative country at its very best.  But that’s just me, living on the fringe of what Wilco see fit to put out, meaning that for the last twenty some years and ten or so albums, I’m still pickin’ and choosin’ what Wilco songs I’m going to keep, and which ones I’m going to let gather dust.
– Jenell Kesler
© Copyright http://www.psychedelicbabymag.com/2016
Jenell KeslerReviewsWilco