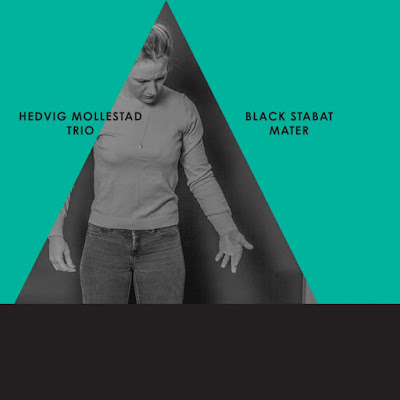 I don’t know where Hedvig Mollestad Thomassen finds time to breathe – or sleep or eat or…. As member or leader of nearly a dozen different bands, the Norwegian Academy of Music graduate has recorded nearly a dozen albums; this is her fourth fronting HM3, and we were pretty excited about 2013’s All of Them Witches, so we were looking forward to see and hear when she took us next. (The prolific band has also simultaneously released a double live album recorded at home in Oslo, Evil In Oslo, that will give you a feel for their live performances.) And the instru-metal power trio doesn’t disappoint, with the blistering fireworks spewing out of your speakers during the opening 15-minute onslaught of ‘On Arrival’ and ‘Approaching’. Mollestad’s fluid stringbending serves the integrity of the songs without being too showy – there’s no goofy, sub-Hendrixian Joe Satriani or Frank Marino nonsense here. And while natural comparisons to Tony Iommi and Jimmy Page aren’t without merit, I think fans of Lita Ford and Kelly Johnson will also find a lot to like in her technique.
That’s not to say that there aren’t passages (mostly during ‘Approaching’) where I didn’t find myself checking my watch wondering when the “song” was going to begin – songs that will hopefully work better live when you have something to look at besides your bedroom walls. But the bitchin’ ‘In The Court Of The Trolls’ finds the trio playing off each other’s improvisational skills while keeping the song constantly moving forward in exciting directions, and ‘40’ is a lovely change-of pace, a study in the “acoustics” of electric guitar if you catch my drift. Perhaps I hear a little of the adventurous stylings of Bert Jansch or Nick Drake or even John Fahey and Robbie Basho, so if your guitar tastes run the gamut from metal freakout to acoustic mastery or even Durutti Column-ish arpeggios, there’s something for everyone to like. And judging by how fast the album is jumping off the shelves, I encourage you not to wait too long to pick up your copy before they’re all gone.