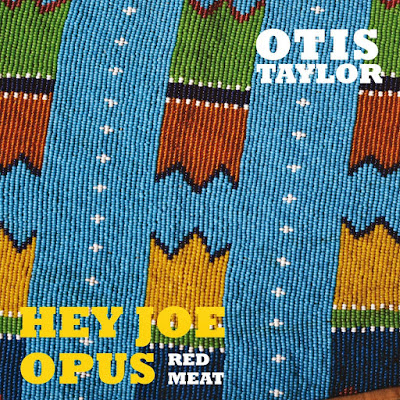 Otis Taylor – Hey Joe Opus Red Meat (In-Akustik, 2015)
Listen
Like Dylan, Otis Taylor’s voice has never been overtly emotional, though it is gritty, and as low and smokey as someone’s who just spent eight hours riding the back roads might be. Always coming across as a man who takes his time, perhaps pondering a bit too much, there’s a considered steadiness to Otis Taylor, and it shows in both his playing and his voice … where he and his guitar are not only indistinguishable, but inseparable, with neither being qualified to exist without the other. And why should it be any other way? Taylor has been around forever, he was a young man back in the 70’s when he gave up music to surround his life with antiques, the buying and selling of other people’s lives, their treasures and dreams, where through all of that dust and hand rubbed wood, he’s been vested with a shaman’s vision and sense of what’s important.
There’s always been an undercurrent and theme to Taylor’s albums, and that’s no exception here on his Hey Joe Opus, featuring the song made famous by Jimi Hendrix, and written years before by Billy Roberts. To my ears, the Hey Joe Opus sounds and comes across much like Neil Young’s soundtrack to “Deadman,” where Taylor visits and revisits “Hey Joe” twice, “Sunday Morning” three times, and filters the rest of the tracks out through the emotional embroidery these two numbers create. There’s an essence of old meets new here, a worldless dreamy atmosphere that rekindles the psychedelic aesthetics of a memory of jam within a jam within a dream, bringing “Hey Joe” back full circle, allowing it to sound even more fresh and more vital.
Noted for his darker visionary intoxications, Hey Joe Opus is even darker than his previous releases, sounding both earthbound and etherial in the same breath, taking blues to a new level of saturation so dense you’ll barely be aware that you’re hearing songs repeated again and again with slightly differing toneations and balances. With all of this creating a questioning metaphor life … that being, “What are you gonna do?”
Review by Jenell Kesler/2016
© Copyright http://psychedelicbaby.blogspot.com/2016
Jenell KeslerOtis TaylorReviews