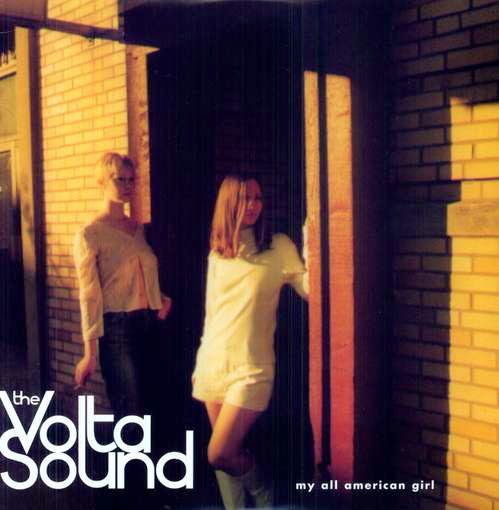 Volta Sound – My All American Girl (Orange Sky, 2002)
Volta Sound [with the name being taken from the Italian physicist, who in 1800 invented the voltaic pile, which was the first source of continuous electric current. The volt unit of electromotive force is named for him.  Thus Volta Sound, being an electric sound …] is an etherial semi translucent band hailing from Cleveland, Ohio, who’s members are shared by other bands, coming together in 2000 to form a loose knit collective of kindred spirits, who’s influences can be traced to Spacemen 3, Brian Jonestown Massacre, The Dandy Warhols, certainly early Pink Floyd, and elements of The Beatles’ “Within You Without You,” along with Donovan’s “Sand & Foam.”
The songs have a definite lo-fi sonic presentation, and at times some of the longer songs are so lo-fi and drawn out that I for one find myself moving to the next track before I fall asleep … and to that end, I’d like to discuss their total body of work, rather than settling on one album, with My All American Girl being their most tight concise accessible and stringent album to date.  All and all you’ll be impressed and presented with something in the neighborhood of 125 songs, and of those, I’ve pared their collective body of work down to an elemental 28 that the neo-psychedelic world can not do without.  I don’t want you to think that I don’t dig all of their music, it’s just that I know what sits well with me, and when the band sets foot into the Hawkwind realm, I step out.  So, if you’re adventurous enough, you might select a grouping of songs that was completely filtered by my radar, and be jettisoned onto a spacerock journey from which you’re likely never to return.
Had I not been traveling this wayward psychedelic road for so many lightyears with the likes of Spacemen 3, Pink Floyd, and BJM being part of the lexicon of my musical life, I think I might be much more impressed with the band … though as I said, the 28 songs I’ve chosen to keep from their collection, are songs I don’t think I could do without.
Those being: Zen Is Everywhere, You’re Nobody’s Girlfriend, My All American Girl, Sunshine, No Control, Deep, Right Up To You, We Have Voices, Everything’s Alright, (My All American) Girl, There Is No Question, Take Yer Sweet Time, Girls & Tambourines, Goldilocks, Gracious Guru, Good Lookin’ Out, Ya’ll, Familiarity, Get In Yr Noose, Let The Robots In, Go Straight Ahead, When It Works, Meditation Station, Dog, Ten Minutes, We’ll Be Fine, Everything’s Alright, Endorphin Deliriums, and #1.
Review made by Jenell Kesler/2015
© Copyright http://psychedelicbaby.blogspot.com/2015
Jenell KeslerReviewsVolta Sound