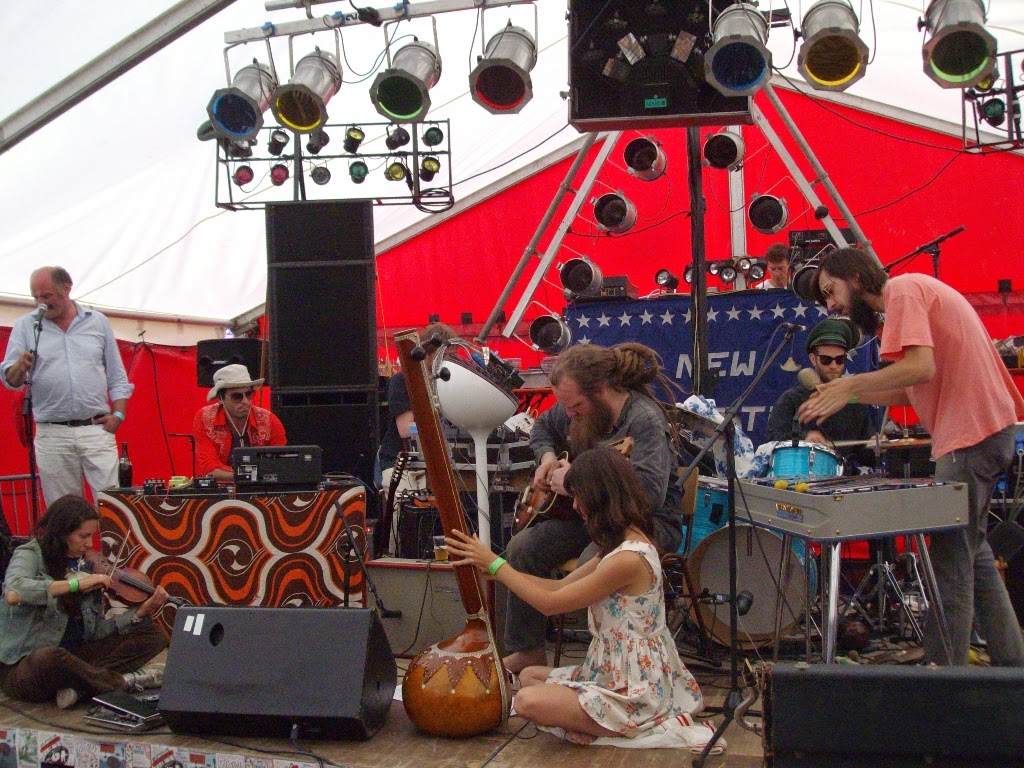 Metabolismus & Jooklo Duo (Petit Festival, 2013)
Being a music journalist is always so thrilling, especially
when you come to the end of the road and all of the sudden you find a
mysterious weird looking street and after catching breath you decide to turn in
and try your luck. Awhile back I discovered “Terra Incognita” while
drinking beer in a bar and handling some weird looking records with my friends.
I found the cover artwork somehow interesting and decided to try them out. I
was absolutely amazed, because I knew the band was recording this in the late
’90s, but they sounded like Faust mixed with Popol Vuh in the early ’70s and
because of it I started looking for more and soon I found out, that they
released quite a few albums in 1993. There wasn’t much information available
and like always when I find something interesting I decided to contact some
members of the band. They apparently started in the early ’80s with a concept
of musical collective rather than a regular band. I spoke with Werner Nötzel
about doing an interview and he replied, that straight forward interview is not
possible, because there is not bandleader and every member can spoke only
about their own experience of being part of Metabolismus, but still they were
kind enough to help me with some facts about collective.  Some questions were answered by: Thomas
Schätzl, Moritz Finkbeiner, Samara Lubelski, Hans Pfanz and Werner Nötzel. 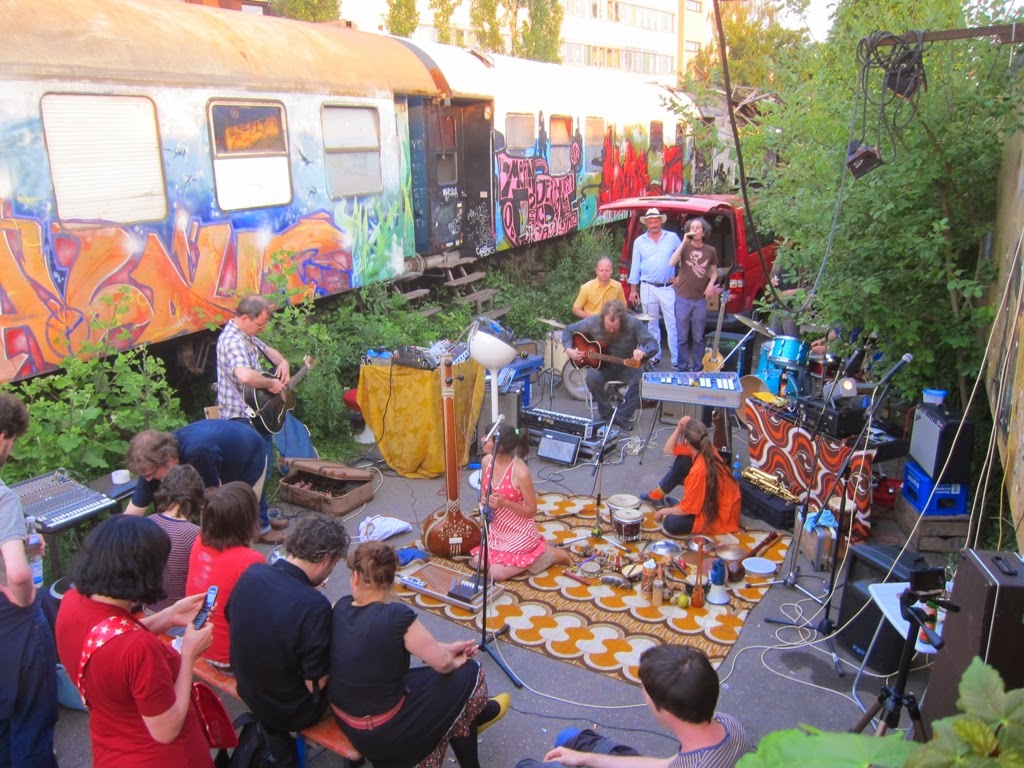 Metabolismus & Jooklo Duo (Stuttgart, 2013)
Metabolismus could be seen as a self-organizing system
characterized by a principle of perpetual transformation. Depending on which
sub-constellation of the metabolic microcosm you’re dealing with it would be
different people that you’d have to talk to. Over the 30+ years that
Metabolismus has been around now the organism/system simply grew too complex to
be narrowed down to one aspect/interview partner. We therefore prefer to let
the music speak for itself… 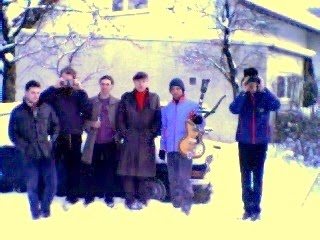 Therefore we can conclude that they are a musical art
commune of people, organisms that form the body or in their case the
improvisations they are producing. Still I wanted to learn more about this art
commune like organism called “Metabulismus”, that formed as early as
in 1981 and had variety of changes and try to get back in contact and get some
answers from whole collective. 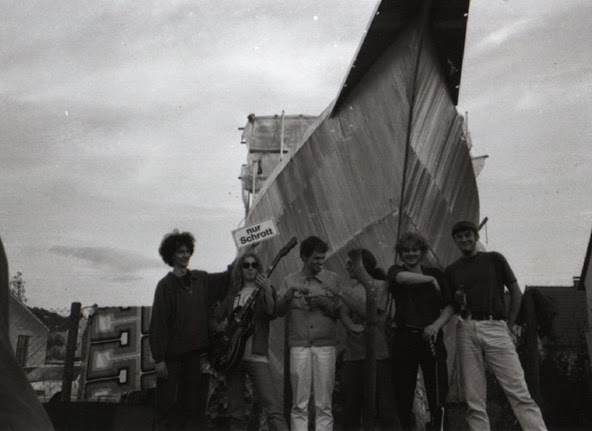 Early years
Who originally got an idea to
form Metabolismus and how did the early ’80s looked like?
Moritz: No idea. I was in
elementary school in the ’80s and hated it.
Werner: That would have to be
Hans Pfanz, or possibly Thomas (Schätzl). The early ’80s, in my memory at least, looked &
felt shitty. Music was a form of escapism, among other things… The same old story of
any generation ever, I guess. 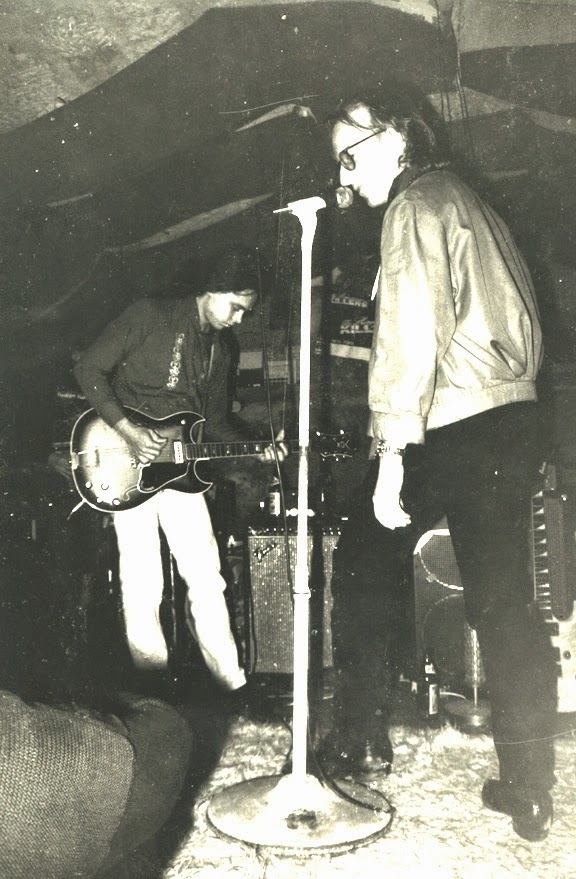 Early Metabolismus – Thomas Schätzl, Ponti Brückner
Were you at the very beginning
like a regular band or how do you see yourselves and who were members?
Thomas: We were, are and will
forever be more than several regular bands.
We are wonderful, dangerous,
confusing or whatever you like.
We were born out of time as
musical terrorists dropping tapes, vinyl `n lots of soul instead of
bombs…
Our psycho terror entertainment
will save you boring bastards from your life of grey…
Moritz: I was a toddler, not a
bandmember.
Werner: In the beginning the band
was without form and void… Then there were parallel bands, sub-constellations,
transmutations, shape shifting, involvements in other projects, and side & solo-projects from
very early on, like Metabolismus II, Metabolismus HK, Metabölisti 38, Punisher, Pig Farm, Stalker,
Cox Orange, Finkbeiner Echo Quartett, Innu Beddo, Prairie Magoos, The Sounders, Yürgen Karle
Trio, Weevil, T.A.S.K., Ditcher, Professor Kopf Band & many many more, and most of them
actually recorded, though not everybody released their recordings…
Early members were Thomas
Schätzl, Jochen Flogaus, Georg Wiedmann, Hans Pfanz, Walter von Holst, Michael
Bussmann, Maldoror, Uwe Rotthaus, Ingo Birkmayer, Michael Paukner, Ponti Brückner, Andreas
Pintore, Miss M…. Then a 2nd wave with Dietmar Köhle, Joachim Schütz, Werner Nötzel,
Thilo Kuhn, Samara Lubelski, Martin Verguliak, … and so on until today. More names along the
way: Moritz Finkbeiner, HansJörg Greiner, David Knispel-Kiwus, Ina Saussele,
Julian Ripert, Robert Steng, Dario Lehner, Alb Ra, Werner Voran, Björn Luchterhand, Stefan
von Raben, Diana Schulze/Denboer, Phillip Korda… – too many to list them all, and I’m
sure I would be forgetting a few. 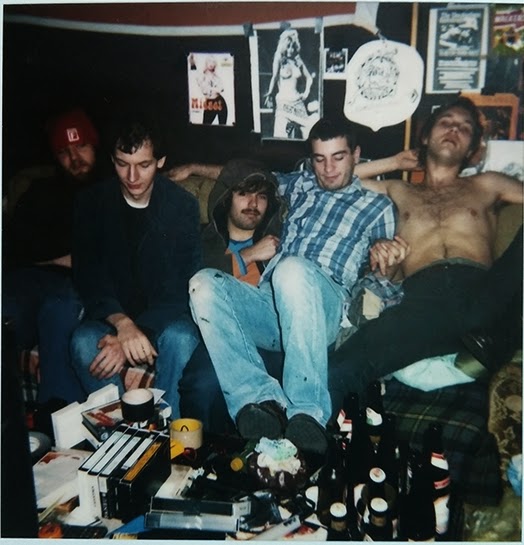 ’90s
Were you living together in
Stuttgart?
Werner: Not exactly, many players
at the time were small town/country folk from various villages around Göppingen, which
is about 40 km outside of Stuttgart.
Samara: At the end of ’91 I had
split NYC for an unknown period and was making my way to Spain via a car waiting for me in
Süssen, Germany. I broke the clutch of that car almost immediately, and spent the end of
the year holidays there while it was repaired. It was a small town and I was playing with Jojo
(Joachim Schütz) and Werner (Nötzel) within weeks – late nights at the Ebersbach rehearsal
space, free playing. I didn’t speak German and had no idea what was going on. I was
immediately enchanted.
What did the collective do in the
’80s and are there any recordings until the very first official release in 1991?
Werner: Sure, early recordings
were done ping-pong style with two cassette recorders bouncing off each other, then
came the 4-track cassette period which resulted in a string of about 30 self-released cassette
albums. We made up labels for them like “Bolametismus tapes & records” but
obviously we copied them ourselves and sold them to friends & on concerts.
Moritz: There are many many tape
releases before the official release in 91 which is mainly compiled from before released
stuff…
Is there a possibility to tell us
about the record labels, that released your music. I noticed the name Moonflower, Swamp Room and a
bit more well known Amish Records. To me it seems, that this was totally DIY
project and I find it very interesting, that all of your releases from the very beginning were
released on vinyl with a few exceptions.
Moritz: Back when most of the
releases came out, it was far from interesting releasing on vinyl. It was quite normal. And
being very conservative, we simply stuck to that until today.
Werner: You got a wrong
impression here, we didn’t start with vinyl but did a lot of cassette releases first, and are still
doing them today… There’s actually way more cassette releases than vinyls. It was such an
obvious thing to do in the ’80s, the direct, hands-on approach: it was cheap, anybody could do it
themselves, and you didn’t have to have large editions, whenever somebody wanted a
cassette you’d just copy one and sell it… Very appealing, even today if you want to keep things
analogue. So this answer leads back to the last question. 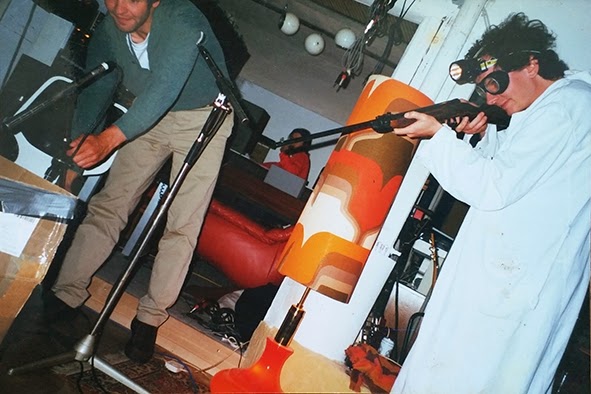 Dietmar Köhle shooting overdub at Sumsilobatem
Yes, it was a total DIY operation
in the cassette days, and even though we work(ed) with different labels it pretty much
still is. We do almost all of our recordings (besides, obviously, live- & field-recordings) in
our own studio (Sumsilobatem) and still release them on cassette tapes. But back in the late ’80s:
we thought it would be time for a vinyl LP, but had no idea about the actual process, or any
money to pay for it. So we made a “demo” tape, which was kind of a
“best-of” compilation of our previous cassette releases and sent it
out to a bunch of “indie” labels – with
no success at all. Nobody was interested until I had the idea to send one to Jürgen Gleue of 39 Clocks, who
at the time ran Swamp Room Records. The 39 Clocks were one of our favourites and a
big influence for me. It’s actually a funny story, I was having lunch at my grandmother’s place
when the phone rang, and it was JG39. He liked the “demo” so much he got my mom’s phone
number from the book, called her, and she gave him my grandmother’s number… So he was
an early supporter and I want to thank him for that! He released the first LP Azzafatazzam which is basically a compilation of cassette
recordings, which also led to contributions
to the “Swamp Room Happening” compilation LP series. After having figured out the technical
side of doing records we released a couple of vinyl ourselves, mostly 7″es. It
was probably the influence of Alan Jenkins (another of our “heroes”) who we talked
to after a Ruth’s Refrigerator show. He said that cassettes are nice, but he’ll recommend just doing
vinyl ourselves right away… The name “Moonflower Records” was picked for that. Some
Metabolismus members were (and still are) Deadheads, so the whole idea & name was loosely
modelled after the Dead’s “Sunflower” label (“Azzafatazzam” is a pretty obvious nod to
“Aoxamoxoa”, and then there’s our “Anthem of the Moon”
LP)… 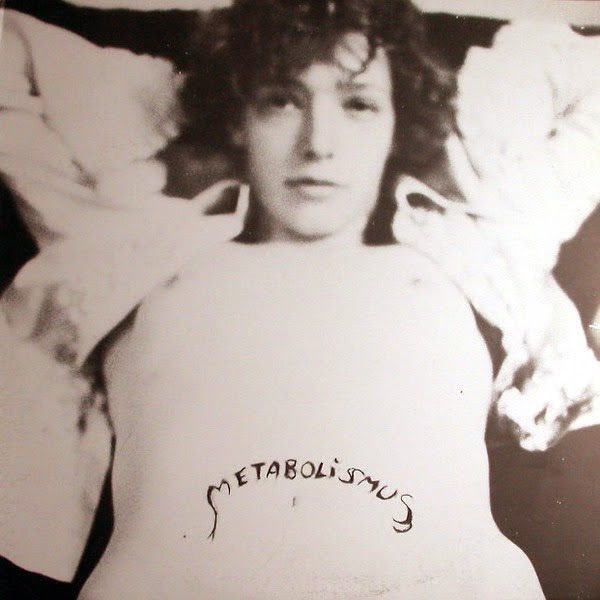 Around that time Samara
(Lubelski) became a part of Metabolismus while spending some time in Germany, and when some of
us visited her in New York in the mid ’90s we met Matt & Brian from Amish Records who were
friends with her. They did several Metabolismus US releases since, we still work
with them and they were very helpful over the years. We’re actually currently working on a
new vinyl project with Amish called “SuS” which should be out very soon. And I’d like to
mention Scott Derr, who did the very first American LP Terra Incognita on his label
BlackJack Records. 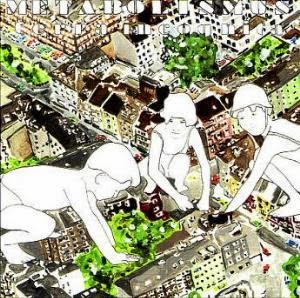 You were also working with Kim
Fowley in the past?
Moritz: On the Kim Fowley &
Metabolismus EP it says so…
Samara: I just know that in Kim’s
hotel room he had sung for Werner to play the solo and Werner had choked. In what seemed
like a clandestine act, Werner had me overdub on the violin at a later date.
Werner: “Working”
together would be saying too much. We recorded with him after basically ambushing him. He’s truly great!
A pretty detailed account of the whole thing can be found
here. 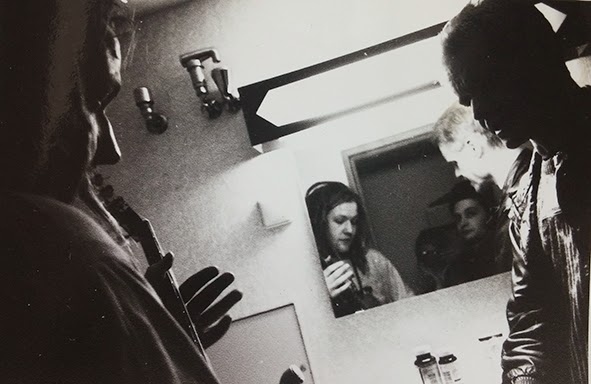 Werner Nötzel, Kim Fowley – in mirror Thomas Schätzl,
Andreas Pintore
What’s the spirit, concept behind
your musical collective?
Thomas: Access denied, however we
sell soul.
Werner: “We don’t give a
fuck.” Or to say it more politely: “Anything goes” might be a
good one, as far as concepts go… The spirit might be Amdusias,
assumably.
Moritz: Being a musical
collectief! Which includes a lot of different ideas, “spirits”, approaches, combined to… well,
whatever happens when we meet to make music…
Future?
Moritz: More music.
We noticed, that you released two
albums in 2013 (Spiraltendenz and Brimborium) and a split with Oakland’s experiment
combo Mono Pause.
Werner: The split with Mono Pause
is not available yet. Metabolismus and Mono Pause (in The shape of Mark Gergis) met quite
some years back, on a Berlin flea market actually, and there’s been plans for a split
release since then. 2013 seemed like the right time to make it a reality to mark the 20th band
anniversary of Mono Pause, but we couldn’t find a label to release it on vinyl until just
recently. It looks like Unrock from Germany will be putting it out later this year (2014)… 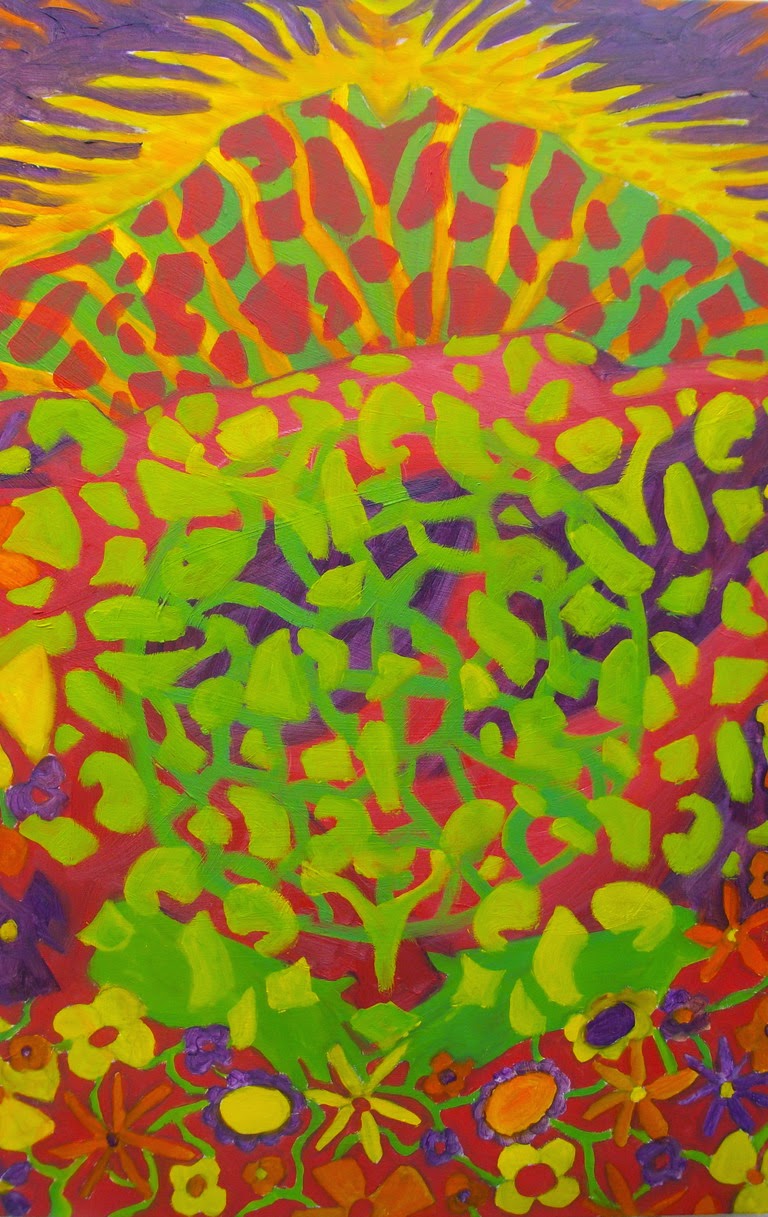 “Brimborium” is a cassette release of a live recording from an outdoor show on a railroad junkyard in
Stuttgart, released by the always great Sloow Tapes/Wax from Belgium. The
“Spiraltendenz” LP was recorded in 2003 and features guest players
Eugene Chadbourne on guitar & piano,
and German drummer Schröder. It was released on Troglosound in Italy, the label
of our dear friends David Vanzan & Virginia Genta (aka the glorious Jooklo Duo – if you
haven’t found your entry into the Jooklo universe yet, do yourself a favour and get to it…). 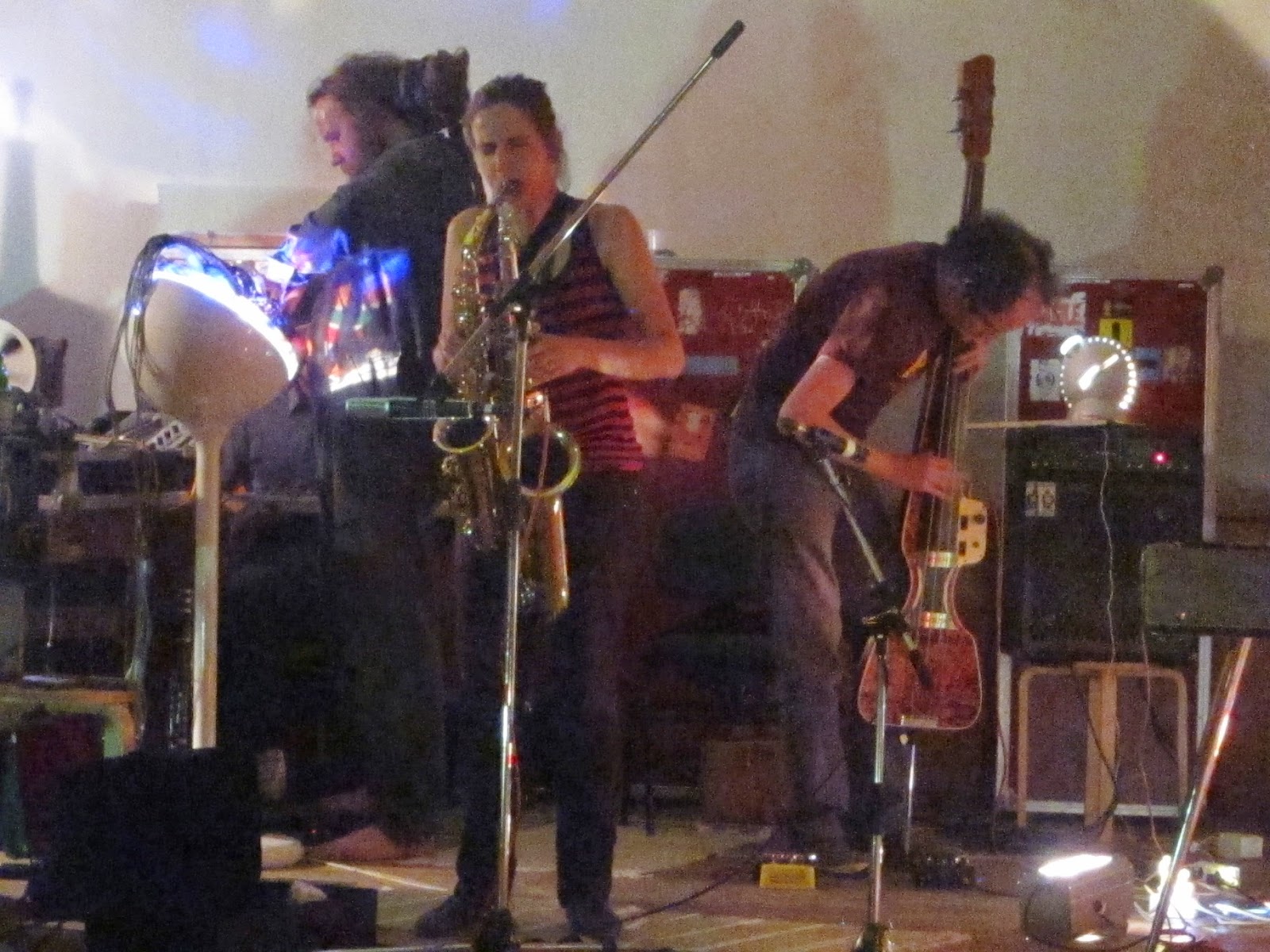 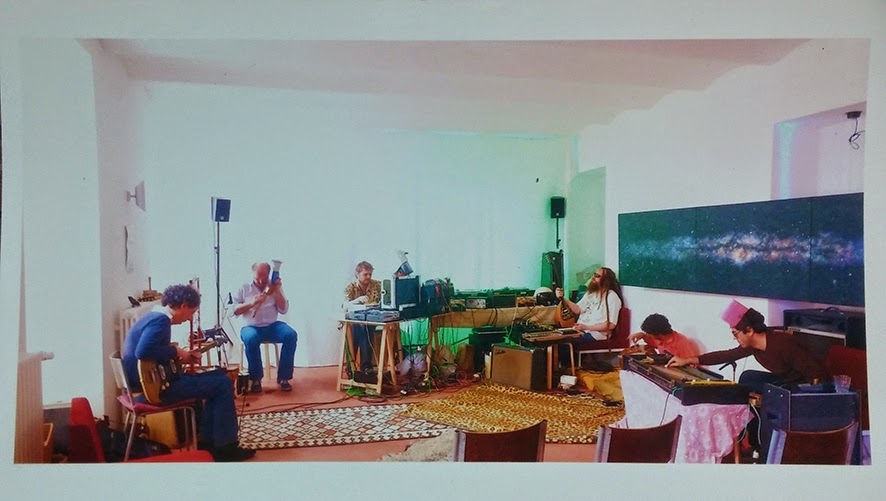