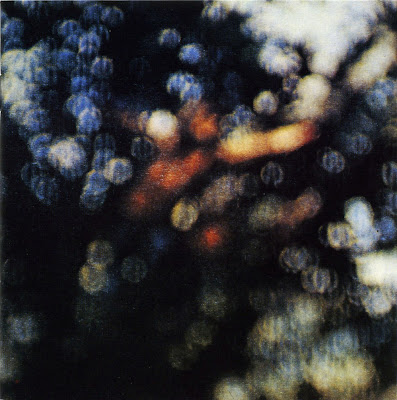 Pink Floyd “Obscured By Clouds” (Harvest Records, 1972)
Psychedelic Time Capsul Record Review
Cover – Hipgnosis
Personnel:
David Gilmour – guitar / vocals / VCS3 Synth
Nick Mason – drums / percussion
Richard Wright – keyboards / vocals / VCS3 Synth
Roger Waters – bass / vocals / VCS3 Synth
I know what your thinking….this isn’t some obscure LP
that’s nearly impossible to find. Nor is it that elusive rock and roll gem you
find at a garage sale hidden amongst Englebert Humperdink’s Greatest Hits, Three
Dog Night, Seals and Crofts, David Bowie’s “Let’s Dance” or
Christopher Cross……but if you did see it in this box of 70’s & 80’s
dreck a crepuscular ray of light would stream through the “clouds”
and despite whatever kind of feelings you have about the totally obnoxious
empire of Pink Floyd, listening to Obscured By Clouds would serve as a
plausible reason to throw all of those feelings out the window. Why? Because
it’s probably nothing like the Floyd you’ve known and heard before, given that
your exposure stretches only to the follow up, “Dark Side of the
Moon” or 1979’s elaborate, band ending”The Wall”. During the
recording of “The Wall” keyboardist extroadinaire Richard Wright told
Roger Waters “to fuck off” when told he had to cut short his Christmas
vacation during the recording which prompted Waters to demand Wright’s
resignation…but that’s a whole other story…..
Eagerly placing the stylus along the edge of the faintly
scratched LP suddenly the walls begin to ‘shake & vibe-er-ate’. The low buzzing
of the album’s title track builds, while David Gilmour gently (as only he can]
picks out a rough-around-the-edges guitar solo seemingly simple, ha ha!!
Perfect…. a brilliant opener. If your like me you welcome the slight
crackling as the music fades past all of the nitty of the gritty
“Introduction”, easing into “Burning Bridges,” a
beautifully mellow track that foreshadows the future signature sound of the
Floyd to come. Skip to the next track and you hit “The Gold It’s In
The…” Yeah, a little bit of an annoying cliffhanger title, but the real
gold is the proceeding “Wot’s…Uh The Deal,” which should be
someone’s  favorite Floyd song. The piano
lead in mid-song…. I don’t know, it’s simply ridiculous, and all the more
depressing. God rest your soul, dear Richard.
Side 1 ends on the notion of the instrumental track
“Mudmen.” Filler? Could be. It’s actually pretty satisfying,
especially if you choose to listen to the album all the way through. Flip over
to side 2 and you’ll hit “Childhood’s End,” another sort of
funky-catchy track that serves well as an opener. After that it’s a lush free
for all with “Free Four,” the album’s only single and the only one
written by Waters exclusively.  Can
anyone remember any stations playing this?!? “Stay” is the obligatory
ballad, echoing a sort of desperate tone, but then again “Obscured by
Clouds” was originally recorded as the soundtrack for Barbet Schroeders’
La Vallee [The Valley]. At this point in their career, the band were not new to
scoring movies. They had already scored the films “More” [another
Barbet Schroeder film] and Michelangelo Antonioni’s “Zabriskie Point”
in 1969 and 1970 respectively. So when they went in to score Vallee, they had a
lot more experience and therefore produced a much finer product.
Floyd was already working on The Dark Side of the Moon
during this period, but production was interrupted when they travelled to
France to score the movie. Nick Mason refers to the project:
“After the success of More, we had agreed to do another
sound track for Barbet Schroeder. His new film was called La Vallée and we
travelled over to France to record the music in the last week of February… We
did the recording with the same method we had employed for More, following a
rough cut of the film, using stopwatches for specific cues and creating
interlinking musical moods that would be cross-faded to suit the final
version… The recording time was extremely tight. We only had two weeks to
record the soundtrack with a short amount of time afterwards to turn it into an
album.”
The album closes on “Absolutely Curtains”….I
love the synths and gentle percussions [[the first Pink Floyd album to feature
the VCS 3 synthesiser]. An eerie note to conclude the record on, but it no
doubt foreshadows the even darker shit that was on it’s way as this was
actually recorded during the rough construction of “Dark Side Of The
Moon”……
The music fades and a sketchy chorus of children appear as a
man begins to sing in a foreign language. Nothing new for Pink as they sampled
fans at a soccer match on their previous and transitional record
“Meddle”.
As you can see below Roger Waters was not the primary
songwriter or singer for the LP. He was instrumental in the writing process as
was David Gilmour & the much underrated Richard Wright.
Track listing:
Side one
1. “Obscured by Clouds”   Gilmour, Waters [Instrumental] 3:03
2. “When You’re In”   Gilmour, Waters, Wright, Mason
[Instrumental] 2:30
3. “Burning Bridges”   Wright, Waters / Lead vocals:  Gilmour, Wright 3:29
4. “The Gold It’s in The…”   Gilmour, Waters / Lead Vocals: Gilmour 3:07
5. “Wot’s… Uh the Deal?”   Gilmour, Waters / Lead vocals: Gilmour 5:08
6. “Mudmen”
Wright, Gilmour [Instrumental] 4:20
Side two
7. “Childhood’s End”   Gilmour / Lead vocals: Gilmour 4:31
8. “Free Four”
Waters / Lead vocals: Waters 4:15
9. “Stay”
Waters, Wright / Lead vocals: Wright 4:05
10. “Absolutely Curtains”   Gilmour, Waters, Wright, Mason
[Instrumental] 5:52
Obscured by Clouds was issued in June, 1972 — seven months
after “Meddle”, nine months before “Dark Side of the Moon”,
the tail-end of Pink Floyd’s prolific epoch.
All in all not their best but essential for Floyd fans as it
layed the groundwork for “Darkside of the Moon” / “Wish You Were
Here” and the aformentioned “The Wall”.
Review made by Bob Mickey Spillane, The Dangerous R&R
Show/2013
© Copyright http://psychedelicbaby.blogspot.com/2013
Bob Mickey SpillanePink FloydReviews