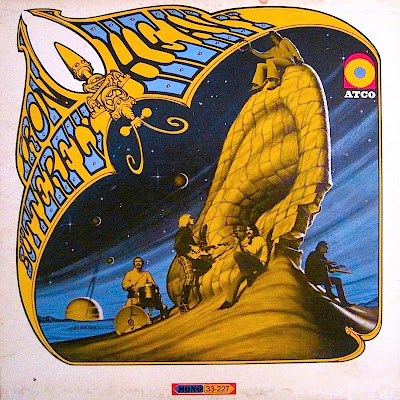 Iron Butterfly – “Heavy” (Music on Vinyl 2012)
Debut album by legendary San Diego band
Iron Butterfly was released in 1968, two years after the band was formed. This
was also the first transition band went into, after three original members  Jerry Penrod, Darryl DeLoach and Danny Weis
left the band shortly after the album was recorded. This album introduced the
band to music scene, six months before their epic second release
“In-A-Gadda-Da-Vida” the same year.
But, let’s stick to “Heavy”.
First of all, the album`s name tells a lot
about the music toughness during the era of the late sixties. Iron Butterfly
were the band who were among the pioneers of distortion guitar blues riffs,
powered with great music and trippy lyrics that created “iron” psychedelic
atmosphere. Music riffs are quite simple, based on couple of riffs, but
regarding the time it was written and recorded in 1967, that was considered
like a whole bunch of sounds and variations.
When Iron butterfly started playing the
club circuit in ’66, there had never been anything that sounded like them.
Dubbed “heavy metal”, Butterfly both directly and indirectly
influenced more bands than arguably anyone else.
Original lineup of the band that recorded
this album was: Doug Ingle – organ, vocals, Ron Bushy – drums, Jerry Penrod –
bass guitar, vocals, Darryl DeLoach – tambourine, vocals and Danny Weis –
guitar.
The first two tracks, “Possession”
and “Unconscious Power”, were considered as the most successful
singles, released as the respective sides of a single. “Get out of my life
woman” is a great hard bluesy tune, followed by “Gentle as it May Seem” and
Vietnam-era song “You Can’t Win”.
Psychedelic B side starts with great
“So-Lo” and “Look for the Sun”. “Fields of the Sun” and “Stamped Ideas” are
great examples of technique ability of Iron Butterfly`s musicians.
Album ends with epic instrumental “Iron
Butterfly Theme” with heavy riff and guitar played noises over the top.
OK, this might not be the best album you`ll
ever hear, or even the best album by Iron Butterfly, but it is essentially
revolutionary its era and it reflects the roots of hard rock. This album is
definitely the “must have” LP for all psychedelic fans, and those who just want
to hear how heavy music started its development 45 years ago.
Review made by Andrija Babovic/2013
© Copyright
http://psychedelicbaby.blogspot.com/2013
Andrija BabovicIron ButterflyReviews