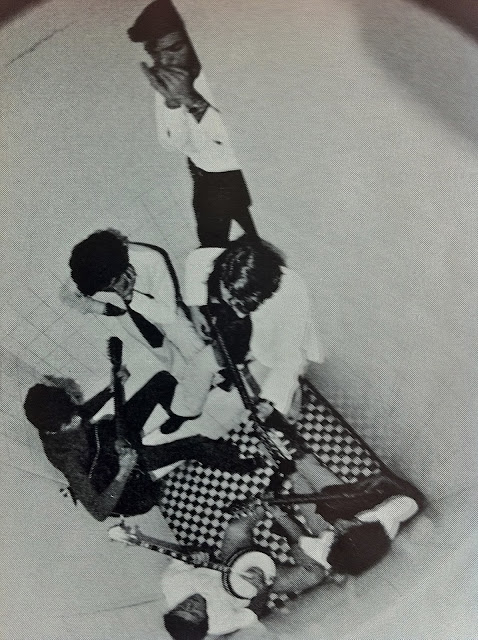 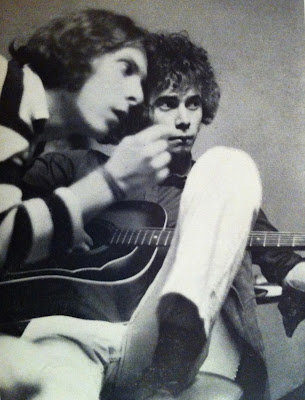 How was the LP distributed? I believe Evasion Records released a very
small quantity of vinyl…
The distribution of the vinyl of Everybody’s
Own by Evasion is something of a mystery to me. By the fall of 1972 I was
attending college in Lugano, Switzerland and I had moved on in almost every
way. We all attended an international school, and after graduation we were
headed out to different countries and continents to pursue other dreams and
obligations. While we remained life long friends, we also went our separate
ways. The sudden dissolution of the band was a shock and disappointment to
Gaston, who expressed this to me only months ago when we reunited in Lausanne
for the current reissue of our record on Golden Pavilion. I could well
understand his feelings, and with the passing of time I can only attribute our
disbanding as a result of our youth, inexperience and a lack of vision of our
own future as a band. What I do know, of course, is that Everybody’s Own did
get around quite a bit. After the initial pressing of LPs sold out, they became
collector’s items, eventually bought and sold on Amazon, eBay and European
sites for considerable money. The music gained traction with passionate,
discerning music lovers of that era, and it continues to this day to draw
praise from disparate corners. I was stunned when I received a note from
Antonio Barreiros of Golden Pavilion Records in November of 2011, saying that he
had been searching for us for more than a year, wanting to release a 40th
anniversary edition of this “important” record…I thought it was a joke. I had
not actively thought about or listened to Hand in over thirty years! The return
of Everybody’s Own has been an unexpected joy for us, though laced with sadness
because of Tony Angier’s untimely death. And yet, due to a posting on a French
website which praised the record as “the best record of 2009” (!!), I connected
with Tony’s daughter Lida, with whom I now share a meaningful friendship. The
summer of 2012 occasioned a Hand reunion in Lausanne with Jean Jacques, Nick,
Sergio (though only by phone, sadly), Gaston and Francois. Nick has been
prodding me to get back into playing with him, so perhaps there is another
musical chapter to be written. It has all been most surprising… 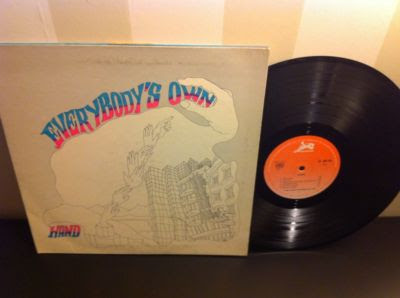 This may be a tough task, but I would
appreciate it if you could comment on each song from the LP.
The
decades during which I had left Everybody’s Own behind and mostly forgotten it
have allowed me to hear it again with considerable objectivity. I will offer
you my recollections and impressions without false humility, as it sounds to me
today.
“The
Load” opens the record. It literally explodes with the full sound of drums, guitars,
piano and harmonica, and contains my own slightly awkward, blistering solo at
the end, a rare moment of Rock & Roll abandon for me. This song sets the
tone for my singing on these tracks. I consciously wanted my voice to whisper
the melodies, and to create a vocal intimacy that would be the opposite of the
usual assertive rock voice. My likely inspiration was Nick Drake, though by his
standards I was a vocal extrovert!
“Leaves”
is innocent, playful and romantic. It comes and goes in a flash of melody, and
from where I sit in 2013 it seems to me like a clear expression of who I was
then. Tony’s shimmering guitar states a second melody superimposed on my finger
picking.
“Time
Will Change Your Season” might be the most intricate and cohesive track. Every
member of Hand is woven into the melody and arrangement, very much like a
tapestry. Theresa’s harmony showcases her spectacular voice. Frank Olivier Hay
on piano plays the most delicate filigree. The song has a mesmerizing
cumulative effect.
“Chubby’s
Song” highlights Tony’s Spanish guitar, later joined by the full band sound
augmented by Frank Olivier’s funkiest piano playing. I love that this song
manages to be so intimate and exuberant at the same time.
“Levy’s
Lullaby” is most assertively Tony’s creation, to which I brought some
structure. It is truly owned by Nick Zoullas’ gorgeous harmonica, which carries
the melody. Levy, by the way, was Hand’s first manager, a teenager himself with
the soul of a promoter. He was the most energetic and passionate supporter of
our band, laboring to bring attention to us, even when nobody cared.
“Shifting
Lead” was, in part, my tribute to Dave Brubeck and Paul Desmond’s “Take Five”,
though blended with a folk rock sensibility. The piano is at the center of its
swing.
An aside: how could I ever have imagined
that, forty years after recording this song, I would be teaching Brubeck’s
delightful granddaughter? My life is full of such surprises!
“I
Drive” is whimsical, happy, the closest thing to pop on the record. Sergio’s
crescendo guitar sparkles, and Nick’s swooping harmonica at the end feels like
driving a Mustang with the top down.
“Who”
is a dark piece, haunting. Theresa’s lines, sung solo, chill the air. The interplay
of my guitar with Tony’s guitar and Jean Jacques’ 12- string are aurally
seductive, but there is a death foretold in the lyrics.
“Dying
Ground” is a white boy’s Blues. Its minor notes, slow groove, and mournful
lyrics, sung in a deliberately neutral voice, felt like the American West to
me, from the perspective of a kid growing up in the heart of Europe. I love the
soft strum of Jean Jacques’ 12- string throughout.
“Seven
Sad Sisters” is our version of an Elizabethan ballad. These women appeared to
me very quickly in verse form, written at the Lapin Vert on Jean Jacques’
evocative melody. Theresa’s vocal delivery gives it utter authenticity.
“Autumn
Calling” is my first fully realized composition, written at fourteen. When I
hear it today, I am touched by how much I understood intuitively about life
before I had actually lived it. Nick’s harmonica is the very sound of longing.
“Everybody’s
Own” is a sonic landscape. It seems like an imaginary Ennio Morricione movie
soundtrack, with an epic sweep that breaks into three distinct movements. Tony
brought the skeleton of this piece, and I added the skin and bones. This track
represents Hand at its collaborative best.
It is worth noting that, months after the
release of the record, Gaston Schaefer was inspired to write an orchestral
score with strings and wind instruments for this song and recorded it with
members of the Lausanne Symphony Orchestra.
Does the name “Hand” have a special meaning?
My friend Alexis Gerard, a contemporary of
ours at school, coined the name “Hand”. As I wrote in the liner notes insert
for the Golden Pavilion anniversary edition, “Hand seemed, at the time, like
the perfect name for a rock band of young school friends. After all, we used
hands to play our instruments, to ask questions in our classrooms, to turn the
pages of our newspapers, novels and books of poetry, to hold the pens that
wrote lyrics and notes, to drop the needles on the records we devoured, to
express both gentle and angry feelings, to raise a glass to youth in full,
extravagant bloom.”
What can you say about the scene you were part of back in the 70s?
We were not consciously part of a scene, as
such. We certainly breathed the same air that brought the social changes so
well documented since that period in an endless stream of films, novels,
articles, documentaries and essays on the Sixties and Seventies, but we were
very focused on our own lives being lived. We had the self-absorption typical
of the young, but we were not seeking to imitate others or join any movements.
Because all the members of Hand were part of more than one culture, we were
less likely to see the world through only one lens. 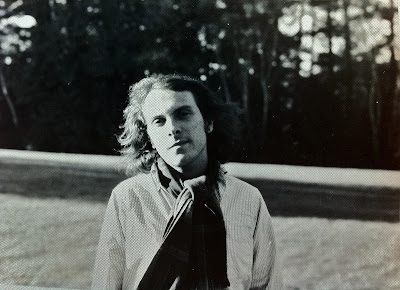 Golden Pavilion Records did a really nice job reissuing your LP. How do
you like it, and what do you think about the fact that people after so many
years are more interested in your music than they were in the 70’s?
Golden Pavilion has done a fantastic job of
reissuing our record. I cannot imagine a better final result. I am also
grateful to our USA distributor, Light in the Attic Records, as well as to
Evasion for facilitating the entire project. It is my hope that they jointly
will continue to get the word out that Hand is still here, available in many
formats, and that it boasts an unusual pedigree and history. I am thrilled that
our music resonates with younger generations. I am a teacher, and I am
immensely flattered that many of my students profess to love the record, know
the songs by heart, and have downloaded them onto their iPods. Recently, two
former students brought me their fresh copies of the reissued LP for my
signature, a gesture that simultaneously made me laugh out loud and moved me
deeply. They helped to confirm that Hand seems to have struck a chord that
still resonates, and that the music has become, as one French journalist put
it, “out of time”. 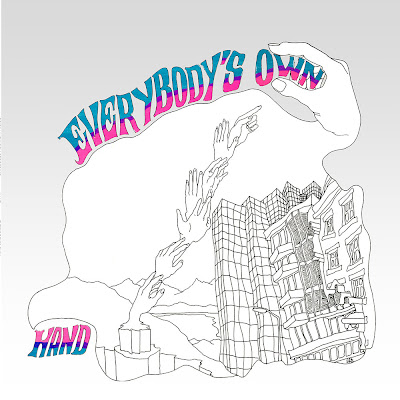 After leaving Hand, I continued to
write songs and perform them with other bands and in different contexts. I have
embarked on a satisfying teaching career since the late Eighties, and my
creative efforts have been focused on my painting, which I pursue with some
success in Connecticut, where I have shown my art frequently. I have a backlog
of songs that have never been commercially released. They are among my best
efforts, and I would welcome the opportunity to have them recorded, by me or by
others. Such a project would be exciting, and may one day materialize. There is
also, somewhat incredibly, a book in the works on Hand and Everybody’s Own,
currently being planned by published author Laura Hurwitz. It is still in the
embryonic stages, but promises to be another unexpected chapter in our still
evolving saga. 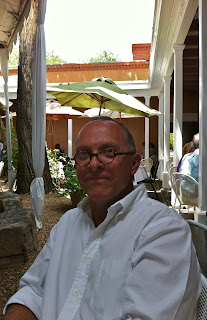