Don Patterson wrote the music and lyrics, was lead vocalist, played electric guitars, directed and produced the album One St. Stephen in March of 1975.

Don Patterson: My father (a single parent) moved about throughout my youth, it was impossible for me to maintain long-lasting friendships. I soaked up everything like a sponge as a child. Art fascinated me, pencil drawing early, painting in oils at seven years of age. As a child I read all the Edgar Rice Burroughs series. In 1964, I was overwhelmed by Dr. No and From Russia With Love, ended up reading every 007 novel, Ian Fleming had in print then continued with spy novels by other authors, then onto murder mysteries and graduated with all the John D. MacDonald books. Science-fiction and horror novels were my main sustenance everything from Clifford D. Simak to Robert Heinlein to Isaac Asimov with a large dose of Dennis Wheatley and Bram Stoker. I dabbled with magic tricks at eight years of age, then picked up the guitar at eleven. In late 1963, the Beatles on Ed Sullivan changed everything for me, I was twelve and hooked. As my musical taste became more sophisticated so did my guitar and vocal styles; I had no interest in pop music – liked the Blues, metal and loved that psychedelic sound. I also loved the movies, everything from 1957’s Quatermass II: Enemy from Space to 1957’s Invasion of the Body Snatchers to Mario Bava’s 1960’s La maschera del demonio. It was the 1950’s and 60’s, we did not have access to video like today (no VHS tapes, DVD technology or easy access by Internet). In the 1950’s, I used puppets for creating the movies I wanted to see. In 1967, I bought a Bolex super 8mm camera, shooting everything that came in front of my camera for the next ten years. In 1968 I left home, became political, explored different religions and immersed myself in the cultural revolution taking place in America.

So you really enjoy watching movies.

I can remember spending complete Saturdays watching double feature movies over and over. In the late 1950 to early 60’s, it was half an American dollar bargain matinee (with all you could eat popcorn). Science-fiction (Ray Harryhausen), Hammer horror films, Hitchcock’s 1960 Psycho, (wow), Mario Bava horror films. I was eight years old when I saw the Blob (1958), was the only movie that ever scared me. Must of checked the heating vent in my bedroom ten or twelve times a week. Alfred Hitchcock was probably the first Director’s name I ever became aware of. Like everyone else that went to the movies, I became aware of Stanley Kubrick in 1960’s, Francis Ford Coppola, George Lucas, Martin Scorsese, Roman Polanski, Sidney Lumet and Steven Speilberg in the 1980’s.

You did several scripts including The Devil’s Reservation and Dreams, Nightmares and Other Illusions.

I am always writing, always evolving.

One St. Stephen was soundtrack for your film called The Devil’s Reservation?

I had written a script titled The Devil’s Reservation in 1974. While finalizing the script, mailing it off to The American Film Institute for a hopeful grant and waiting for their response – a group of musicians and I went into OWL studios to put together a 11 songs I had written (music and lyrics) and 1 song (music by Bill Blechschmid with my lyrics) for the soundtrack. I picked up the entire tab. We concentrated and recorded nine tunes in five days.

What are some of the strongest memories from recording and producing this LP?

With Charlie Bleak on Bass Guitar plugged directly into the board, Frank Reynolds (Pierce’s) drums were 3 microphoned (left side of drums, right side and bass drum) into the sound board, I was in a separate sound room, (more like a large closet) my tube Marshall 200 watt guitar amp was microphoned. Yes. It was loud. Tom Murphy (OWL studios) had just bought a new video camera, wired me up to a television monitor where Frank and Charlie were. They could see me, I could not see them. This was how we laid the rhythm tracks for the LP’s nine songs. We tweaked ’em perfect, several on first take, quickly. Next, I whipped out ‘dummy’ vocal tracks (several we kept cause they were perfect the first go).

“The entire album was finished in five days.”

Over the next three days, other musicians drifted in and out, laying additional tracks. A female vocalist, friend from Akron, Ohio was set to lay background vocals. She showed up but was freaked by the music and cancelled out at the last second. Another musician, dropped out due to car trouble. During this time period, several non-contibuting as musicians, like Terry Wilson, a disc jockey for a local radio station would drift in and give us a listen, throw out positive comments or offer suggestions. No arguments or disagreements ever surfaced. I had an firm idea in my head of exactly what I wanted, everyone just added their creative juices to the pot. We were on a roll.

We ping-ponged tracks, mixing as we could due to only having an eight channel 1″ Scully tape recording professional deck, (same deck used to record the soundtrack for the movie, Woodstock). The entire album was finished in five days.

A piece of cake.

Over the course of the next month, everyone that heard the music, wanted a copy. My twisted arm, forced me to talk to Queen City Album company in Cincinnati about pressing LP discs. Planned to do 5000 LPs. There were a lot of people who loved the music and wanted a copy.

I had a week to design a cover and a label.

The original cover was of coffee table shot from above (camera looking down). On the coffee table was a photo of me as a eight year old, dressed in a military uniform for a Catholic Military Academy (St. Aloysius, New Lexington, Ohio) that I went to for one year, (1958 – worst year of my life and eventually contributed to my becoming a devout atheist). Several color pictures of former and current girlfriends (semi-clad, sexy and attractive). An ashtray with a smoking joint, on the side of a mirror with several lines of coke, several tabs… you get the idea. Great design for a 1975 psychedelic album.

The back cover was a photo of me from 1973 in Akron, Ohio, taken by Steve Finelli. A group of us artistic types had started a co-op coffeehouse called the Earthwood on Grant Street, in Akron. Uh oh. The hippies had moved in. Several doors up the street was a more conservative watering-hole social club. We must of scared them. They hired a rent-a-cop. He gracefully posed with me and picture was taken. 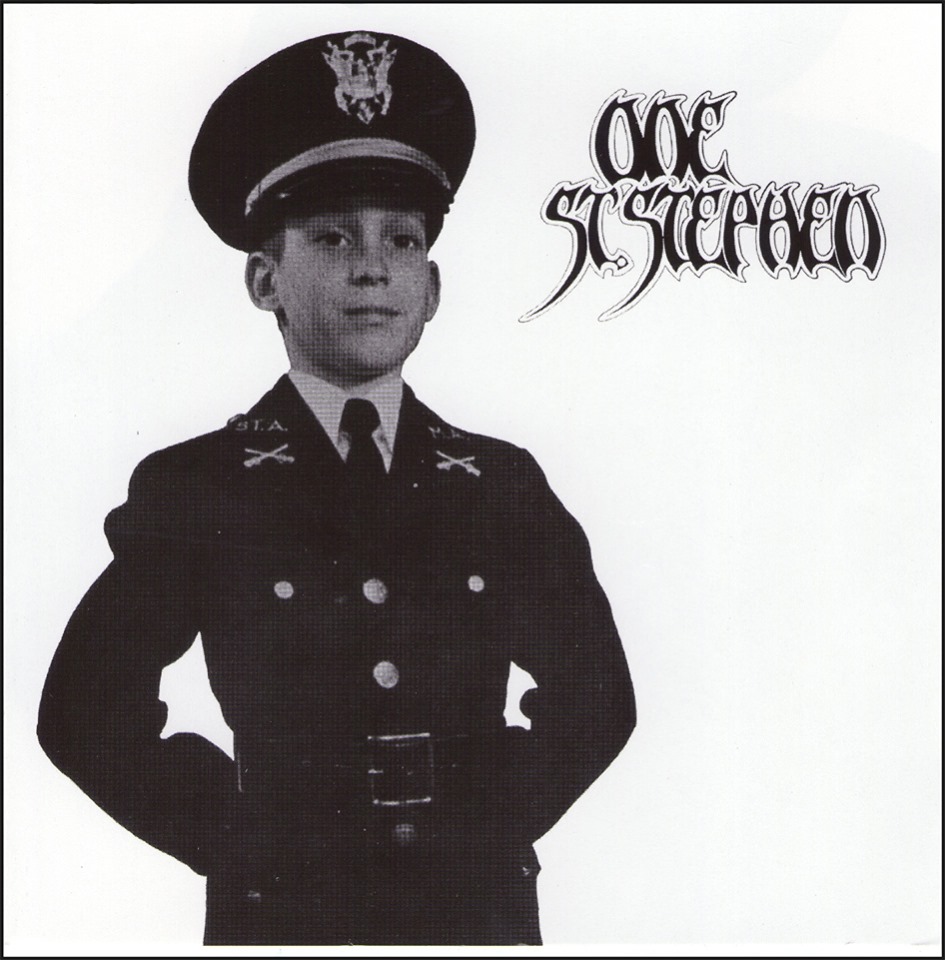 With LP design submitted, I ordered 5000 copies of the One St. Stephen LP.

Several weeks went by, the first 1000 copies came in. I opened the first case and freaked. The cover had been completely airbrushed white by Queen City (my photo as an eight year old enlarged to fill the cover). I called Cincinnati and asked why. They responded that they worked for other, more conservative people and several religious organizations. My cover promoted drugs and sex. A no no.

I cancelled the next 4000, thus, there were only 1000 copies of the original One St. Stephen LP ever made.

Oh. I never got the grant from the AFI.

I owned a reel-to-reel with sync capability throughout out the 1970’s. Also really enjoyed playing with a wide variety of musicians. In the mid-1970’s I was very prolific, constantly juggling with different creative ideas, recording hours of solo stuff and jams with other musician friends. Some day, I might pull out those reel to reels, give a listen and/or walk down that path again.

Just for your readers and in the name of All Hallow’s Eve… I put up some past projects, including a complete 26 minute, short ghost story. See In a Vacant Building here.

My whole life has always been about making things. It keeps me young. Keeps me moving. The only thing to evade my abilities has been to make money off my creative projects… I am far from rich or having any amount of money. Fortunately, I usually tend to break even. I am locked forever in the middle-working class. I can live with that.

The Anazitisi reissue of my One St. Stephen LP is absolutely delicious. Very well done. Audio excellent, graphics are beautiful. For anyone into the Psychedelic 60’s or 70’s, this is an ultimate LP reissue. Wish I had kept the original LP cover and had more photographs from that period of time in the studio. Unfortunately, things get lost with time.

Today, I just want to make more movies. Sure wished I could afford a new camera like a (laughing out loud) Sony NEX-FS100UK or Canon XF305 or a … to make new movies with… but my wife of 30 years has me on a tight leash these days. All these ideas, scripts, a cast that want to make new 1080 30P feature movies, and NO new camera(s) to work with. Oh well.