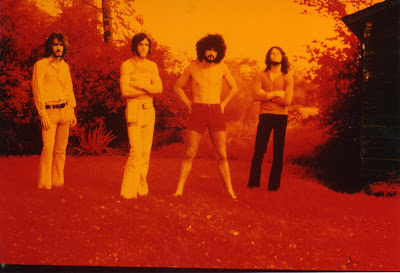 Interview:
1. Thanks a lot for taking your time to do this interview about your band! Firstly I would like to ask you about your childhood and teens years. What were some of the influences that made an impact on you back then and where did you grow up?
I grew up in Detroit, Michigan.  My influences were Elvis Presley, Jerry Lee Lewis, Buddy Holly, Chuck Berry and of course all the Motown artists. One Christmas when I was about 14, I got a little radio for a present and I used to listen to it late at night under the covers so as not to be discovered by my parents.  (I think I was supposed to be sleeping)  I picked up an R&B station down south somewhere and I heard the Motown song “Money” by Barrett Strong and it had a profound effect on me.  Of course Elvis and Chuck Berry and others were also amazing to me, but there was something about the Motown sound that was different.
2. Before Magic, were you or others in any other bands? Any releases from then perhaps?
I formed my first band in 1964, the year when music changed forever.  The Beatles, Rolling Stones and all the British groups revolutionized music for me and I think just about everyone.  To capitalize on this new phenomenon we named our group “The Lloids of Lon Den”.  We recorded a single on the now somewhat famous Fenton Records in Grand Rapids Michigan.  Side A was “You Will Go” and side B was “Girls Can Really Dance”.  These were my first two original songs.
We played some great venues in Michigan and opened for “The Kingsmen”, Roy Orbison, The Beach Boys and other groups from the early sixties.
And then like a dream come true, we got some interest from Motown Records on “You Will Go”.  We went to the famous Motown Records studio and met and played for one of the staff producers there.  We were in a position to be the first white group to be signed to Motown.  But everything came to an end when a week or so later I was drafted into the Army and sent to Vietnam. 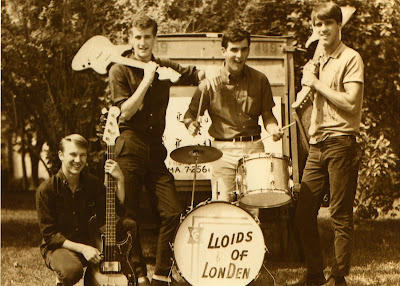 3. How did you guys come together to form Magic?
After two years in the Army (one year in Vietnam dodging bullets and rockets) I finally returned to Michigan.  This time I went to East Lansing Michigan, home of Michigan State University.  I slept in my car for a while and began looking for a band to join.
There was a vibrant music scene there because of the university and in a few weeks I found a band looking for a singer and guitar player.  They were called “The Next Exit”.  As it turned out their bass payer was also leaving and they asked me if I new anyone that played bass.  As it turned out, my brother Nick was getting out of the army in a matter of weeks.  Nick played in the Lloids of Lon Den with me so he was able to walk into a new band right out of the Army.  A few months later the keyboard player left the group and then the lead guitar player because of conflicting day job responsibilities.  We didn’t replace the keyboard player but we did get a great guitar player, who was a studio musician from Miami, Florida.  He was visiting his brother who lived in the area and saw our advertisement we placed in the paper.  He liked the group and joined.  So we had myself on rhythm guitar and lead vocal, my brother Nick on bass and vocals, Gary Harger (the only original remaining member of “The Next Exit”)  on drums and Joey Murcia on lead guitar and vocals.  A friend and photographer who took our band photos convinced us to change our name to “Magic”.  And like magic, we became a new band! 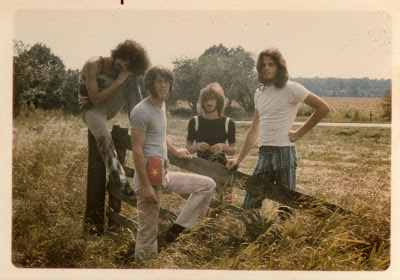 4. How do you remember some of the early sessions you had together?
We were the house band in the most exclusive club in Detroit at the time and doing quite well getting our sound together.  But one day, Joey our guitar player said he was sure he could get us signed to the label in Miami where he was once a studio musician.  Of course this got the immediate attention of myself and the other members.  Stay in Detroit where winter was in full swing, or go to Miami Florida where it’s warm and sunny and we can record.  After thinking about it for a full six seconds, we all decided to go to Miami.
5. You recorded your legendary LP in 1969. How did you get a contract for it? It was released by Armadillo Records…(what can you say about this company?)
When we arrived in Miami, We were in Joey’s territory.  Joey used to play with a well known band in Florida called, “The Birdwatchers”.  He got us a gig at a club and then set up a meeting with Henry Stone, the owner of “Alston Records”.  Henry came to the club and saw us play and signed us up on the spot.  As you can imagine we were quite excited.  I was the main songwriter in the group so I began writing and within a month or so we had a finished album. Now Alston Records, was mainly an R&B label, not unlike a Miami version of Motown. They had a few well known artists, Betty Wright (Clean Up Woman), Clarence Reid (Nobody But You Babe),  Benny Latimore and a few others.  Because our sound didn’t really fall into that category, we thought a new label name might be a good idea so our producer, David Brown (who was also the studio bass player for Alston Records), thought up the name “Armadillo Records” and we all said, why not.  So the Armadillo label was born. 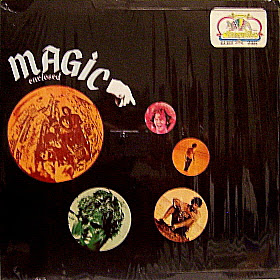 6. What are some of the strongest memories from producing and recording this LP?
For me, being in a recording studio recording an album is what I would imagine heaven must be like.  It was a very happy time in my life.  Bobby Birdwatcher, member of the “Birdwatchers” and the keyboard studio musician for Alston Records, played keyboard on a few of the songs.  He and Clarence Reid also sang backup vocals on the song “You Must Believe She’s Gone”.  Everyone at Alston Records pitched in and helped with our record.  It was kind of a family atmosphere there.  Very nice.
One memory stands out during the recording process.  Joey was getting ready to lay down the lead guitar track for “I’ll Just Play”
when he suddenly decided to play the solo while completely nude.  And so he did.  Was that too much information? 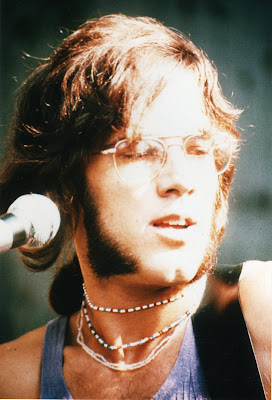 What can you say about the cover artwork?
The front cover was an idea I had, which was to put us all in little bubbles floating on a black surface.  Enclosed if you will within the bubble.  Thus the album title “Enclosed”.
The photo’s were taken on one of the Florida Keys.  We had a gig at a club in Miami Beach that was run by the Mafia.  The bouncer was an enforcer type.  But they treated us very well.  Anyway, on one of our days off, we got up in the morning and headed south to the Florida Keys and spent the day in the sun and surf taking photos and using illegal substances.
How many pressings were made?
I don’t know how many pressings were made.  But we had a single on the charts in Florida, “Keep On Movin’ On”, and side two of the album, Who Am I To Say”, “I,ll Just Play”, were getting a lot of play on many FM stations.
7. What did you do after the album?
After finishing the album we began to play all over Florida where most of the chart action was. 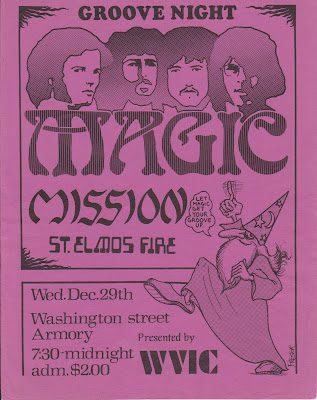 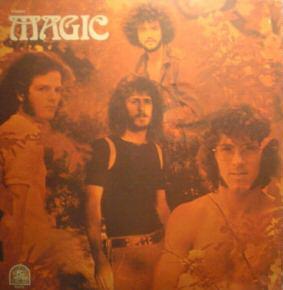 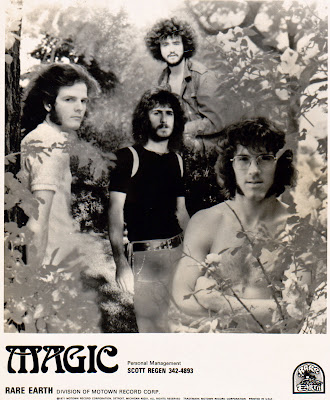 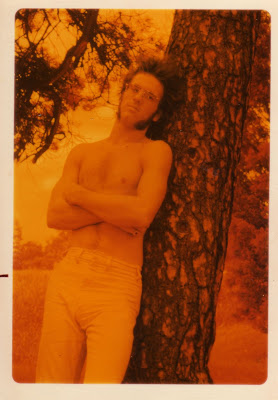 11. What happened next?
Well, that was a hard thing to deal with.  We tried to pull ourselves back up and find another record label, but our spirits seemed broken beyond repair and as it turned out so was Magic.
After the break up, I moved to Los Angeles and continued pursuing music.  I even worked as an actor for ten years.  That was very enjoyable.  I had a small role with Gwyneth Paltrow in the movie “View From The Top” and played Johnny Depp’s lawyer in “Blow”, just to name a few.  Joey went on to do studio work again and played with Andy Gibb as well as The Bee Gees, Joe Walsh and others.  My brother Nick played in assorted bands and solo projects until he was tragically killed in an auto accident in 1998.  Gary, the drummer, got out of music and went into assorted business ventures.
The Magic Enclosed album became popular in Europe when someone began bootlegging it on assorted labels.  In 1997 I got a call from Roger Maglio, the President of Gear Fab Records.  He informed me about the bootlegging in Europe and offered Magic front money and future royalties to allow him to re-issue the album on CD.  We agreed to this and added a few bonus cuts and released the CD in 1998 and dedicated it to my brother Nick.
12. What are you doing these days?
Well, I left Los Angeles in 2007 and moved to Port Townsend, Washington; a small town about an hour and a half from Seattle.  I have a small studio that I record in.  I made a CD in 2009, “Welcome To My Dream”, and another CD in 2011,”Searching For Nashville”, of all original songs and this year I also recorded a cover version of the Bob Dylan classic “Subterranean Homesick Blues” with a different twist to it.  These are all available at iTunes and CD baby.com. 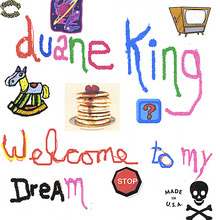 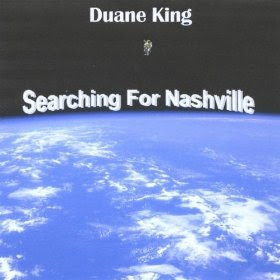 I also have a You Tube site you can access by going to You Tube and entering: 123duane.  When my videos come up just click the 123duane again on any of the videos and it will take you to my site.  I’m also at My Space.  If you visit any of these sites don’t forget to say hi and let me know how you’re doing in this crazy world.  Until then, I’ll say thanks to you Klemen and Psychedelic Baby Magazine for this trip down memory lane, and I’ll leave you with an old Turkish proverb that goes like this:  One who sleeps on the floor, will never fall out of bed.  Au Revoir. 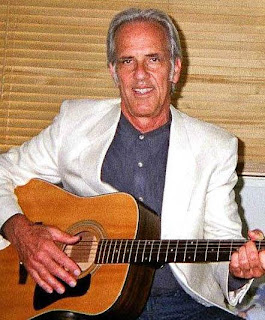