How I met Jimi Hendrix by Jenell Kesler

How I met Jimi Hendrix by Jenell Kesler 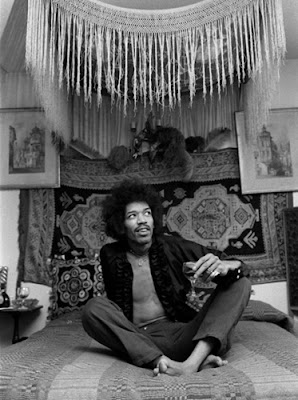 There is some music that doesn’t need to be commented on, less of course one just likes to hear themselves talk, or one is writing a historical journal and the records and its artist require the recognition.  And such is any material by Jimi Hendrix; so rather then give you my opinion of his work I would like to relate the story of the first time I saw the man live at the Fillmore, back in the 60’s … and yes, I still have my ticket.
I’ll admit it, I was nerdy, loved music and loved hanging around with the guys who dug the music, and those who would later in life become surgeons and space scientists.  I was dating a guy who was doing a local radio show back in the day, which meant he was making enough money to starve, but he got free vinyl and had worked out a deal with Bill Graham, though Bill could never pronounce his last name, to allow him free access if he mentioned the shows being performed at the Fillmore and give each a good nod.  We’d been digging the music of Jimi Hendrix and when Bill Graham had the foresight to book Jimi into the Fillmore, Jeff asked if I wanted to go.  I deeply considered the offer for about a millionth of a second before I yelled ‘YA!’  Now the show was amazing, like nothing we’d expected, like nothing the world had ever seen, truly the beginning of a turning tide.  But I’m not writing about that here, here I’m going to give you the after show event that has haunted us for the rest of our lives.
Jeff’s dad owned a car dealership, which meant that he always had a new dealer’s car to tool around in, unfortunately it was never a cool car, usually big, but there was always a radio, and in those days a car was a car and the gas was free.  Shows began late at the Fillmore, and ended in the early morning hours, always heady events, so when we stepped from the club into the cool night, it was truly a breath of fresh air.  We’re standing there, Jeff’s digging in his pocket for his keys, finds them and we walk down the block.  There sitting on the steps is Jimi and Noel, we almost passed them by, but Jeff draws up short and tells them what a wonderful show it was, how impressed we both were, how we were hoping they’d make a point of coming back to San Francisco.  Jimi and Noel were very polite, and said “Thanks.”  Then my boy asked them what they were doing, and Jimi said, “Waiting on the bus to take us back to the hotel.:  Can you imagine that, but that’s what the times were like.  Jeff said “Cool,” thanked them again and we walked on down the block.  Once we were in the car, I said almost franticly, “Jeff, you should have offered them a ride!”
That was the first time I ever heard him swear.  He gunned the car down the block only to see the back windows of a bus, Jimi and Noel taking their seat … and we, we were left with the memory that we could have given two thirds of the Jimi Hendrix Experience a ride back to their hotel.
*A Post Script:  When Jimi did come back to San Francisco, he was driving his own orange Corvette.