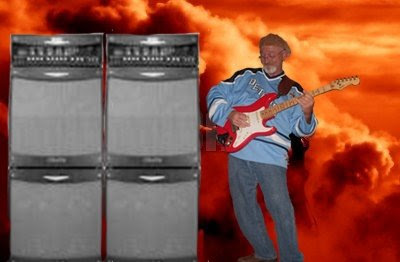 Interview:
1. Thanks a lot for agreeing to this interview, Michael! I would like to ask you first where did you grow up and what are some of the early influences you had back then as a young kid and later as a teenager?
Well first of all thank you for the interview.
I grew up in Kansas City Kansas.  Still live within five miles of my childhood home. LOL.  Music always captivated me.  When I was about 5 or 6, I remember hearing a song by Jimmy Dean called “Big Bad John”  It scared the hell out of me.  My grandfather told me the story behind the song. To this day I still will listen to it.  Something about telling a story to music.  Wow, what a concept.  I grew up listening to everything,  Country, Broadway musicals, Jazz, Blues.  Then my cousin turned me onto Rock.  I had to learn how to play a guitar.  That was what I wanted to do.  But most of all I wanted to write songs.  Like what I was listening on the radio. At that time I was into what was called bubble gum music. Groups like 1910 fruit gum company, Boyce and heart ,The Monkeys, The grass roots.   I was only about 10 or 11 years old.  It was AM  radio.  Then at 12 I found FM radio then everything changed.  I was listening to Beatles ,Rolling stones, Deep Purple, Sly and the family stone, Crosby, Stills and Nash, Neil Young.  Then as a teenager, it was Eagles, Gordon Lightfoot, Doobie Brothers, Poco, Kansas, Southern Rock.  I can go on and on.  All these styles influenced me.
2. Were you in any bands? Any releases perhaps?
My first band was called, Wheatland Central,  I was 17.   I started it with my best friend Joe Hopkins.  He was my mentor,  He taught me how to play guitar.  And we wrote many many songs together.  I was a closet Poet as a kid. I never told Anyone about it.  I started writing poem’s at the age of 10.  Anyway Joe would come up with a tune, and I would start writing lyrics with Joe.  Our first song was called, LOL “Our Song”  It was about us.  Recorded out first Album at a studio  Chuck Chapman was running.  He went on to start Chapman Recording in Kansas City Mo. At the time it was the best studio in town.  We ended up recording in just about every studio in Kansas and Missouri.  The studio was where I wanted to be, you know creating songs.  In my head I had this record player and it would play these songs.  I would hear them and wanted to put them down on tape.  That is how I wrote music and still do.  But in the past 10 to 15 years, mentally I had upgraded to digital,  LOL.  Then Joe and I started another band called ICE.  As in Wheatland Central, we played Eagles ,Poco, Southern Rock and our own music.
Then we formed a band called Tower.  Now that band kicked some ass.  We had three guitars, two lead vocals Joe and myself.  Plus the other three guys John Jones, Tom Penia  and Doug King sang back up.  We were into Southern Rock and Progressive Rock. There was not anything we could not play.  Our Signature song at the time was “Free Bird”  We played it the live version and we played it note for note.  Sometimes the bars would not let us play the song because it would start fights from drunk people getting to the song.  We were the only band that played it as far as I know.  At least played it the way it should have been played……LOL.
We had a chance to go on tour with Kansas,  but we were under a contract at that time as a house band and they would let us void the contract.  They were making a lot of money off of us.  And that sucked big time.  We were pissed.
3. Where did you tour and again if you have some interesting touring/concert stories to share, that would be really great to hear too!
We toured all over the four state are.  Just about everything happened to us.  LOL
Played behind chicken wire a few times.  Glad we did.  Had a shot gun pulled on me while I was changing cloths in between sets. Played for a bicker gang and was forced to play  Mississippi Queen most of the night.  Not our choice.  Played at a Concert with 20,000 people and we were the only white people there.  Saw my life pass before me.  LOL.  The rest I best not talk about.  LOL. 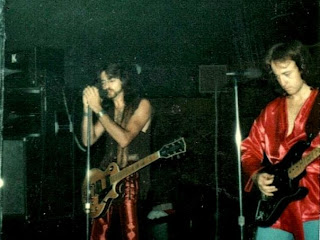 4. What are you doing these days?
I spend most of my time just writing and recording my songs.  I have written or co-written over 1000 songs.  Yes some suck.  My main writing partner is Tracy Wittman.  I also work with Brian Roberts and Ice Fire Music on writing and recording my music he also co-writes with me.  We are starting a production company to work with lyricist’s by putting music to their lyrics,  Mixing and mastering other musicians music.  I have a Publishing Company “WTC Publishing”
It means We Take Control.  I was tired of Publishers taking my music and setting on it.  I was doing all the leg work and they got 50%.  Hell with that….  I will keep on writing until the old ticker stops beating……………Thank you. 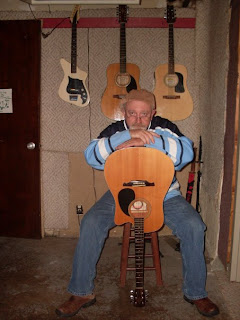