What do you consider to be your first real exposure to music?
I don’t know what my first influence was but I do remember my first realization of music. It occurred when I was about five years old or so and driving with my mom and dad and older brother and sister. The radio was playing and I was in the back seat unaware that I was tapping my foot until my dad asked “who is doing that”? My mom said it was me and said something like “I guess he likes the music.” Yeah, I guess I did. My parents and siblings were always playing music in the house – mom loved Dean Martin, Perry Como (“the epitome of manhood”), Jack Jones and the like and dad loved The Mills Brothers, Jerry Vale and such. They both loved songs – always singing (mom better than dad but dad always did it anyway). My older siblings loved everything from Wilson Pickett and the other soul stars to Johnny and The Hurricanes to Ronnie Dove. They both had wide ranging tastes in music so I imagine hearing it all from my parents and siblings was very influential. Loved music for as long as I can remember, especially “songs” and their lyrics.
Were you in any bands?
Never in any bands – only releases I put out were “Attic D.” and the single of “I Wanna Be The King” b/w “Funky Kinky” until years later when I released the albums “American Dirt” and “Ambulance Driver”. Matter of fact, getting ready to go in again and start work on the next collection.
Your album Attic Demonstration was privately released in 1976.
Well, it was not originally planned as a record – they were just song demos I had made in the hopes of getting some artists to record them. The reason they were pressed onto vinyl was because I figured it was easier than constantly making up cassette tapes to send out. When I got the album finished, I figured I would try to get some reviews. Not many came about but “Trouser Press” said something like “When he stumbles into chaos and dissonance, he sounds like Lou Reed and Neil Young without the aid of melody” – not the best thing to read but, hey, Lou and Neil and me in the same sentence – that was a bit of cool. The recordings were basically my friend Gordon Gaines and me mucking about without any rehearsals and all in one take with overdubs also “one takes”. When I finally decided to do a “proper” recording, I brought in a full four piece band and got a more polished sound on the single of “I Wanna Be The King” and “Funky Kinky”. Since then, with “American Dirt” and “Ambulance Driver”, I have continued to bring in musicians as needed for each song – working with a core band whose anchor is the amazing Jack Pearson. I still do most of it – at least my parts – in “one take” to keep the spontaneity but the all around sound is much more produced than “A. Demo” was. 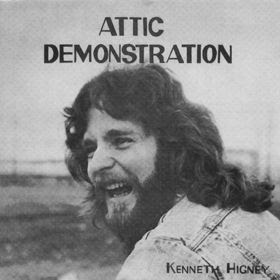 What are your strongest memories from the recording session and the production of the LP?
I don’t know – we just went in and did it. I do remember the first time I sat behind the mic with my guitar and basically couldn’t sing (people say I still can’t sing and I never argue that point). The engineer asked if I wanted “some Scotch” but I figured I would just push through without any “help”. Figured I was there and had to either give it a shot or never write again and I knew I would always write and the only way the songs were getting out was if, at the least, I did the demos. No time for choking up then. My other vivid memory was seeing a synthesizer for the first time and watching the genius of Gordon Gaines messing with it a few minutes and then, basically, mastering it. I knew he was brilliant but that moment solidified his genius for me. The world has no idea what it missed by not embracing him. Miss and love him to this day.
Did you play any shows after releasing your album?
No shows at all – I am a shy clown. One day for sure – but not back then.
How many copies were pressed?
I pressed up 500 copies and gave (for no money at all) the right to press up another 500 copies to some guy who loved the album. Figured if he was paying for them, might as well get them out. I recently signed an agreement (this time for money) to have it reissued on vinyl (500 copies again) and I also reissued it – with “King” and “Funky Kinky – on cd a few years back. 3,000 cd’s were made and they sold very well. Kebrutney was originally set up to release “Demonstration” simply to have a name on the label. Since then I have released the “King”/”Kinky” single, a single by the amazing Jerry Rooth (“But You’ll Try… Again” b/w “But You Loved Me Anyway”), a promo compilation titled “Single N Independent” (lots of indie acts). They were all released over 25 years ago. Recently I released an album by Joe Bendik (“The King Of Anti Folk” as he is known), Ashley Turba (which I co-produced with Jack Pearson and which contains four of my songs), the soundtrack to an indie film on which I was the music supervisor and which has gained a bit of notoriety because of a scandal in the New York City pension fund office. The film was “Chooch” – feel free to Google “Chooch and New York Pension Fund” – you should get some interesting results. The last two things released were “American Dirt” and “Ambulance Driver”. At this point the label is basically an outlet for my cd’s but I may put some more things on there. We will see. I like the idea of having “physical” copies of everything although I have to admit – the download life is here and I have to get the music out there that way also.
Were the songs written specifically for the project?
None of the songs were written specifically for the album – they were all written beforehand and all were written – as mentioned above – with the hope of having them “covered”. The “band”, such as it was, had no hand in the writing of any of the songs. All were completely written before we entered the studio. A practice I still do today – write the songs alone – work out the arrangement – go into the studio and listen for “the magic”.
Where did you get the inspiration to write songs like “Night Rider”, “Children of Sound” and “No Heavy Trucking”, which I absolutely love!
Thanks for “loving” the song. I don’t like to talk about the “inspiration” but in this case, I will tell you what I remember about the three songs you mentioned. “Night Rider” was written after I read a book about the Ku Klux Klan. I never knew they were called “Night Riders” and liked the name. The song is a simple condemnation of the Klan – “Trying to frighten like a man who’s not around” refers to the Klan’s fear mongering – much like the man who’s not around (Hitler). “Children Of Sound” – I have no idea where that idea came from – not a clue. “No Heavy Trucking” came from a sign I always saw when I was a truck driver. Meant I (and no one else) could not drive a truck down some roads. Yeah, I didn’t pay much attention to the signs at the time except to write the song. I like that one a lot.
Could you say something about the cover design?
It was a quick photo shoot by my then girlfriend. We took it in Jersey City behind the now demolished “Roosevelt Stadium” and in the background you can see the Bayonne Bridge which connects Bayonne (where I was living at the time) and the city of Newark. Not much to say about the “design” except that I wanted the lyrics on the back cover so as to make it easy for anyone who might want to record a song or two. Black and white was decided upon – I think – simply because we liked the photo.
What happened next? I know you recorded single “I Wanna Be the King / Funky Kinky” in 1980.
Yeah, the Funky King single was released (1,000 copies pressed). Copies are around – gets played a bit here and there and is on the cd reissue of “Attic Demonstration”. 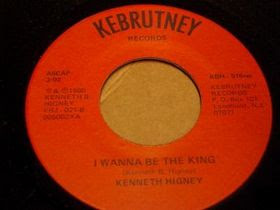 What were you doing in the 80’s, and what in the 90’s?
I was doing what I continue to do. Live as well as I can, stay happy and healthy and write. Was always writing and continue to do so. “Ambulance Driver” has songs on it dating back to the “A. Demo” days as well as ones written in the 80’s and 90’s and onto songs written last year. I have lots of songs – all great I must say – and will hopefully get them all out as the years tumble down.
In 2009 you released a new album called American Dirt.
I love “American Dirt” – it was, as someone said, as if I had been given money by a label to do a “proper” recording after the label folk had heard “A. Demo” “Dirt” is more fully produced and contains many songs from the “Demo” days. This is what I wanted to achieve with my recordings after I decided to be the “artist” as well as the writer. “A. Demo” was not meant as a recording – they were all demos – but everything since then (The “King” single and “Dirt” and “Ambulance Driver”) was and is conceived as a “recording” as well as a “song”. It was recorded in a town called Murfreesboro in Tennessee and was done with me, Jack Pearson, a drummer and bass player laying down basic tracks (with my one, two or three take vocal) and then “layering” the recording as needed. Some of the songs are basic and bare and others have more layers. Whatever I felt the song called for was put on each one individually. 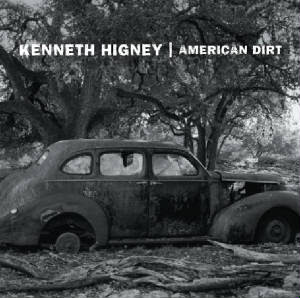 Well, I have to say many thanks for making this interview with me.
Thanks for the interview – it was fun and much appreciated. Future plans are to continue to write, record and unleash the monsters upon the world. Hopefully I’ll start doing some live gigs and see lots more of the world. 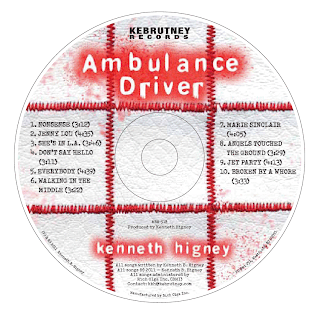 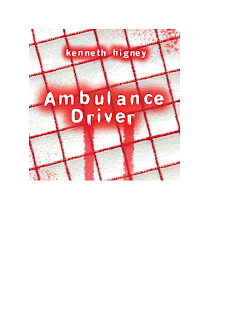 How do you feel about the fact, that young people from other parts of the world listen to your music?
I love that anyone at all finds something of interest in any of my songs. That has always been the reason. Never been about “making millions” – it is what runs through me and very few things give me equal pleasure. I love writing and have done it without making any money from it and will continue to write (and record) until the dark comes and takes me to hang with the others. It would be so cool to have “young people from other parts of the world” cover some of the songs so I can hear the interpretations but, if that never happens, it is still cool that “the world” has heard some of the songs and enjoyed them. 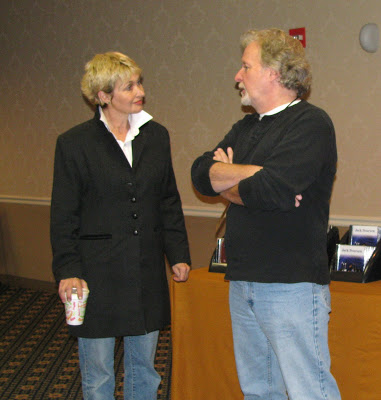 Thank you again for your time and effort, Kenneth. Would you like to share anything else that I didn’t ask?
No, sir, I think we “shared” enough – just be happy and enjoy life and treat each other with respect. Thanks so much for this – stay well.
To purchase any of Kenneth Higney’s cd’s please go to www.kebrutney.com
– Klemen Breznikar
InterviewKenneth HigneyKlemen Breznikar